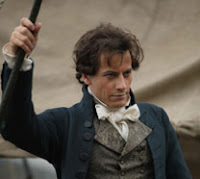 Here, for example, is Ioan Gruffudd:

First, as the Regency-era Wilberforce in the film Amazing Grace…

Then as the Regency-era Horatio Hornblower:

Of course, when Ioan played Horatio Hornblower, he had a sidekick: Archie Kennedy. Hornblower was sort of young and sweet, and Archie was even more so. 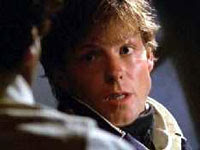 There. Still very Regency. Very appropriate for this blog.

This past Sunday, my interests intersected in an interesting manner!

I went to a science fiction media fan convention… And Jamie Bamber was there.

Jamie Bamber, you say? Our Archie, at a science fiction convention?

Why, yes, of course. He is no longer sweet little Archie.

Jamie Bamber has been hitting the weight room, and he now plays the military hotshot Apollo, on the new Battlestar Galactica.

Yes, he’s definitely been working on those muscles. (Not that I noticed or anything.)

At the convention, he actually talked about Horatio Hornblower, too! He said that had been his first acting job ever. (See? This post is highly relevant to the Regency!)

I noticed one other link to the Regency at the convention… Doug Jones, an actor who most often performs underneath intricate masks and make-up (he played Pan in Pan’s Labyrinth, for example), was there, talking about his upcoming role as the Silver Surfer in the Fantastic Four sequel.

And The Fantastic Four, of course, stars Ioan Gruffudd as Reed Richards, a.k.a. Mr. Fantastic.

Ooh. Looks like maybe he’s been hitting the weight room too. (Not that I noticed.)

Now, for those of you who will think this whole post is highly juvenile, and beneath the dignity of this blog — not that I’m mentioning any names (Janet) — I’ll just say, it’s very Regency.

In fact, I’m being remarkably restrained. Regency men “stripped to advantage” — and it’s not like I put a picture of Jamie Bamber shirtless here, or anything. 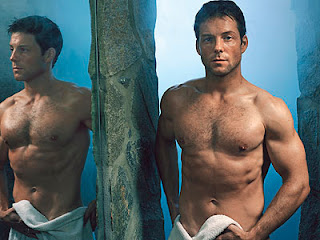 Can’t think how that happened.

I had nothing to do with it.

So… Who’d have pictured our little Archie, sweet sidekick Archie, even more sweet and vulnerable than sweet-little-Horatio-Hornblower Archie, all grown up and looking like that?

So, here are your questions for the day: (answer any or all):

1) Why do so many Regency writers also read and write science fiction? Why do science fiction conventions have Regency dance? What is the connection?

2) Who’s cuter, Jamie Bamber or Ioan Gruffudd? (And how do they compare with Clive Owen, Matthew Macfadyen, and Gerard Butler?)

Cara
Cara King, author of MY LADY GAMESTER, in which hunky Lord Stoke never takes off his shirt

Elena Greene grew up reading anything she could lay her hands on, including her mother's Georgette Heyer novels. She also enjoyed writing but decided to pursue a more practical career in software engineering. Fate intervened when she was sent on a three year international assignment to England, where she was inspired to start writing romances set in the Regency. Her books have won the National Readers' Choice Award, the Desert Rose Golden Quill and the Colorado Romance Writers' Award of Excellence. Her Super Regency, LADY DEARING'S MASQUERADE, won RT Book Club's award for Best Regency Romance of 2005 and made the Kindle Top 100 list in 2011. When not writing, Elena enjoys swimming, cooking, meditation, playing the piano, volunteer work and craft projects. She lives in upstate New York with her two daughters and more yarn, wire and beads than she would like to admit.
View all posts by Elena Greene →
This entry was posted in Uncategorized and tagged Horatio Hornblower, Ioan Gruffudd, movies. Bookmark the permalink.

27 Responses to If Jamie Bamber’s Hot, It’s Not Like I Noticed Or Anything