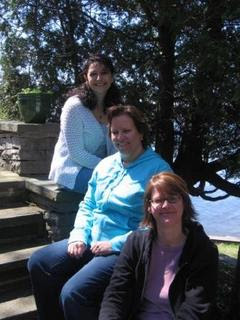 Here’s a picture of me with my friends at this last weekend’s retreat. Yes, I look fat and asleep but it is NOT due to the great food we ate (my friends are awesome cooks as well as talented writers) or the wine we drank (a few bottles gave their lives for the cause) or even the few Lindt truffles I consumed (purely for inspiration, you know). It was just very bright out there this weekend and living in upstate NY, I’m just not used to all that sunlight! And the appearance of a double chin is just a nasty reflection from my turquoise hoodie. That’s my story and I’m sticking to it. đź™‚

Despite the hedonism we all accomplished a great deal. I added 10,000 words to the second draft of my mess-in-progress. 10,000 very sloppy words but that’s OK, it’s my process. In my 2nd drafts my goal is to refine the plot and scene structure. Plenty of time to rewrite in the 3rd draft once I know the storyline holds together.

My friends also made fabulous progress on their respective manuscripts. If you’d like to learn more about how to organize such a writer’s retreat, check out their post at Writer Unboxed.

Over the two nights we also viewed the recent adaptation of Jane Eyre starring Ruth Wilson and Toby Stephens. I loved it. Ruth Wilson has this elastic face that can look plain, otherworldly, even beautiful at various times which is perfect for the character of Jane. Toby Stephens is the best Rochester of any I’ve seen (I rather liked Timothy Dalton but did not care for William Hurt in the role at all).

Purists have had several problems with this adaptation. They’ve objected to some of the simplified dialogue. I’m not a purist; I would rather they make these stories accessible to people who have trouble with the language in a 19th century novel. I also can’t see how many of the rather long-winded speeches Rochester makes in the book would translate on film. I didn’t notice anything anachronistic and I also recognized many of Charlotte Bronte’s most brilliant bits of dialogue.

Another controversial issue was the sensuality. I read at least one review in which someone said the touching in the big break-up scene was improper for the period. Um, I think Rochester was already behaving improperly for the period (any period, really). Perhaps those reviewers should just write a complaint to Charlotte Bronte.

I wonder if people are just appalled at any hint of human passion in books they read in English Lit class. What do you think? Have you seen this version and did you enjoy it? Let me know!

And to all my writer friends, especially the hard-working, stressed-out mommy writers, I highly recommend you try this sort of writing retreat. Your muse will thank you for it. đź™‚