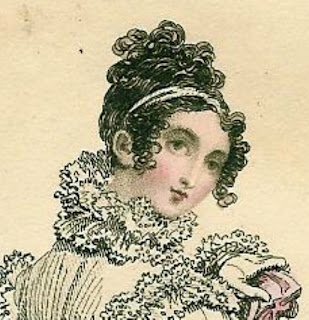 I’m reading one of my new research acquisitions, In the Family Way: Childbearing in the British Aristocracy, 1760 – 1860 by Judith Schnied Lewis, Rutgers U Press, 1986. (Do you have THIS one, Kalen???).

My heroine is going to have a pregnancy and birth in my new work-in-progress, so purchasing this book was a necessity! It promises to be interesting reading.

In the first pages (as far as I’ve gotten), Lewis makes the case for changing social values from 1760 to 1860, from the good of the group to the personal wishes of the individual. Her population of study is the British aristocracy and in addressing this issue, she says:

Whether family members chose to address each other by name or title is not only a sign of their perceived intimacy, it is also a clue to whether they see that relationship as predominantly a public or private one. It is thus one good index for tracing the role of domesticity.

Lewis talks about an evolution of the more formal modes of address before 1800 to more informal terms of address in the mid-1800s. So in 1780s, she says, Lady Stafford referred to her husband as Lord Stafford (and vice versa) and Lady Sarah Napier always wrote of her husband as Col. Napier. (I always think about the Bennetts in Pride and Prejudice calling each other Mr. and Mrs.). As time goes on, Lewis states that informal address, given names or nicknames, tend to appear–the Duchess of Bedford calling her husband Johnny, for example; the Earl of Scarborough referring to his wife, the Countess Fredericka as “dear Freddy.”

Lewis makes the point that: This switch to informal and even casual modes of address is significant in two ways. First, it clearly indicates that the individual takes precedence over the rank that he or she holds…Second, this verbal transformation identified varying levels of intimacy among people.

Gee. Another example of the Regency, occurring smack dab in the middle of this period, being a time of transition. Something more to think about – the clash of the needs of the group/family vs the needs of the individual; the changing nature of terms of address. This isn’t any surprise, really, but it is interesting to read about it in the context of how members of the aristocracy address each other.

Names are such a confusing area of writing Regengies. Just getting titles right is a daunting task, and presenting the variety of names one person holds and making it make sense to the reader is a challenge. I have a particular problem in this current wip. My hero is a minor character in Innocence and Impropriety and in the January 2008 book, The Vanishing Viscountess. He’s called “Pomroy” or “Pom” by his friend, Tanner (whose given name is Adam Vickery and whose title name is Tannerton). My editor said “Pom” is a derogatory term. The dictionary defines it as: n. – A disparaging term for English immigrants to Australia or New Zealand. Who knew?

So my hero can’t be Pom. To solve this dilemma I came up with a great uncle who conveniently has died so Pom’s father inherits a new title, Earl of Varney (or is it Varcourt?), thereby giving Pom his lesser title as a courtesy, making Pom Viscount Cavanley. I am trying to incorporate this convolution in the plot so it will mean something and not merely make readers eyes glaze over.

And I’m having Pom and the heroine using first names. Pom’s first name is Adrian, which could be a female name, but I liked it and enough is enough already!

At least Lewis’s book has made me feel that this first name basis made historic sense. It is always my modern, American inclination to make all my Regency characters use first names, but that is something that doesn’t fit the history, so I tend to swing to the other extreme of confusing accuracy.

Am I obsessing about this unnecessarily? Does anybody care if Regency names or titles are used correctly or not?

Re the issue of first names, I am not one of those who thinks all couples follow the example of the Bennetts, or even of Mrs. Elton. The Bennetts were the older generation and Mrs. Elton was very much on her dignity. In PERSUASION, Anne, her sister Mary and Mary’s husband Charles all call each other by first names. Mr. Knightley calls Emma by her first name though Jane Austen doesn’t show us if/when she starts to call him by his first name.

And does anyone know for sure what couples called one another in private?

To me, the choice of address does have to reflect the relationship between the characters. In most of my own stories they start out more formally and it’s a sign of the change in their relationship when they start thinking of each other, then later calling each other, by their first names.

I don’t have this book, but I am going to order it RIGHT NOW! 🙂

Elena, I agree that forms of address can be a very useful tool in delineating the kind of relationship a family has in a story. It’s a big turning point in many stories when the hero and heroine start calling each other by their first names!

Diane, I didn’t know that Pom is a derogatory word! I always thought it was short for “very cute Pomeranian doggie” 🙂

I must admit, the books where everyone calls everybody by their first names just never feel Regency to me — but I’ve got no objection to characters using first names for best friends or for very close loved ones.

In MY LADY GAMESTER, I decided that my hero would always go by his title, and would even think of himself that way… So when one reviewer referred to him as Richard I was confused for a second, wondering “Who’s Richard?” Even his brother doesn’t call him Richard. (Of course, he’s a very rigid guy.) 🙂

I’ve done it both ways, Cara. Used first names or more formal address. In fact, it seems to me my heroes go by title names or last names and my heroines by their first names. I hope whatever I decide sounds “regency.”

Fascinating post, Diane! I join others in preferring name/title use to be meaningful rather than accurate. I do like it when heroes are called by their titles – there are such limited period-appropriate names that it’s a fun way to sneak in a cool nickname!

What a shame you had to change the name! I really like Pom as a nickname, and there can hardly be held to be any link to the slang term – which most people don’t find in the least offensive anyway. It is frightening how pressured authors feel to be politically correct, even when writing a book set in a politically incorrect era.

I think you can make the argument work out as you want it. We know, for instance, that the Devonshire household (which would be contemporaneous with the Bennetts) used nicknames very freely in their letters to each other, as did Lord Hervy (from the previous generation), and the Fox family (who called their eldest son “Ste”, short for Stephen). IMO, members of the upper classes would be more likely to use informal names, nicknames and such than members of the gentry (esp as many of the names men were known by date to their school boy days).

Thanks, Francois, I would have loved to write a hero named Pom, especially because he is one of those irresistible rakes.

Lindsey, I do love to use last names or title names for heroes and get such names as “Sloane” or “Tanner”

But, Kalen, do you have the book? I’m in a secret competition with you to have at least one book you do not have!

I’m sure “Pom” wasn’t a disparaging word by the time of the Regency. 🙂 After all, Australia had only been colonized by the Brits a few years before, and New Zealand not at all. But I guess one has to worry about modern readers’ sensibilities…

It does bug me when the author gets titles wrong, like calling the hero Lord John Johnson in one place and Lord Johnson in another, or thinking heroes with courtesy titles are peers, or whatever.

It does seem like, even just taking Jane Austen for your model, you can justify many different modes of address. So I’ve got no problem with hero and heroine calling each other by their first names. But in some books you get this very Modern American thing, where the hero immediately insists on being called by his first name instead of his title. Actually, I’m not always comfortable when Modern Americans do that–like phone solicitors calling me up and addressing me by my first name, like we’re old pals.

I love all the choices we have with different forms of address and the levels of intimacy/formality that can be implied.

Incidentally it drives me crazy when male aristos in regency-sets address each other by their first names. No no no (as I recently wrote in the margin of a contest entry). The best way to go is a nickname–the English are still very big on nicknames and shortened versions of surnames.

One thing that surprised me when I was reading a book about 18c women [title I can’t remember, sorry] was a series of love letters in which the man addressed the woman by a short version of her last name–“my dear Jonesy” or something like–that I thought was very sweet.