Since Amanda already disclosed our obsession with Dancing with the Stars (final competition tonight!) and Project Runway, Top Chef, Top Design, Shear Genius, etc etc, I thought I might update you on Bullrun.

Remember our interview with romance cover model Richard Cerqueira? He announced that he and his brother were competing in the reality TV show, Bullrun, a cross country road competition on Spike TV. 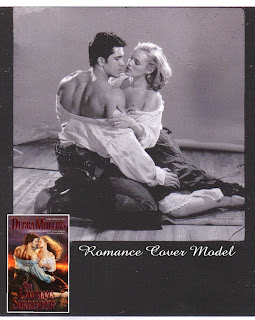 I watched every episode of the competition and it had much of the drama and excitement of those other reality TV shows mentioned above. There were petty rivalries, close calls, major obstacles to overcome. The personalities of the competitors were, of course, a major component of the show’s drama. 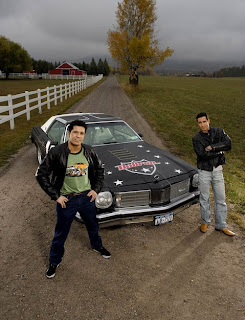 I’m pleased to announce that Richard and his brother came in second in the competition! They didn’t win the prize money, but they put forth a great effort, coming from behind, barely making the cut in the first weeks of the show. I was disappointed that they did not get more air time and mystified why the show’s producers thought that the mostly bleeped out dialogue of the other teams were more screen worthy. Team Cerqueira did not swear nearly as much as the others and they pretty much reached their position by using their own resources. Other teams made alliances in the early weeks, seeking to better their chances of winnng over other teams, but the Cerqueiras made it on their own. They came in second even with a major setback of having to use 2 hours to get their brakes repaired. I was really glad they made it to the top two teams.

Spike TV is not my cable channel of choice. I do watch a lot of the shows on the Style Network, like How Do I Look?, Fashion Police, The Look for Less. These shows all involve style makeovers of one sort or another. My very favorite makeover show is What Not to Wear, both the British version and the American one.

I’m also fond of reality shows such as Clean House and Clean Sweep (which I can’t find anymore!). These two shows basically go into a cluttered person’s home, clear out their cluttered room, sell the junk at a yard sale and redecorate the space into a neat, organized, pretty room. It is the stuff dreams are made of…come clean MY house and make it beautiful!! It is the turmoil the characters go through to give up their beloved but junky items in order to have a functional room that intrigues me.

I also love the drama of selling houses and so watch the HGTV channel and its House Hunters, Sell this House, and Designed to Sell.

Lately I’ve also been watching reruns of The Biggest Loser.

How this all fits in to writing risky regencies, I’m not so sure. I am certain some of my other Riskies are slack jawed with shock at my level of entertainment…..

But I know Amanda shares this folly. Keira, our Risky frequent poster is also with us….although maybe even they have not slid this deep into the mire….

(What reality tv shows are YOUR secret pleasure…mmmmm? And did anyone else watch Bullrun?)

As for reality shows, I watch a lot of the singing kind — American Idol, the second season of Pop Stars, and Rock Star INXS. And they all entertained me quite a bit!

But I do try to limit my TV time, so there’s always a lot of shows I’m sure I’d enjoy which I don’t watch. (And as it is, I watch more TV than I think I should — but I can’t figure out what to give up!) 🙂

Actually, one nice thing about American Idol is that I can talk to my niece and my sister-in-law and my cousins and people in the grocery store about it.

Anyway, thanks for the description of Bullrun!

I only watch one – The Amazing Race. Competition for me, as a sports nut, and world travel for my wife, who apparently wants to get out more.

Rob,
I’ve never seen The Amazing Race, but it sounds like my kind of show (but…do they do makeovers, too??)

Cara, I KNOW I watch too much TV but I’m usually doing something else, like email, when I’m watching. I never watch daytime TV. I love for it to be quiet and that is when I write.

Diane, I think I do actually get TLC with my lame cable package. So I might be able to watch “Clean Sweep.” That would certainly satisfy the organizing fiend within me. Is the show running right now? If so, on which day and at what time? I couldn’t find it in TLC’s overall schedule.

I love Pokemon. I used to schedule dinner breaks around when Pokemon was on in the afternoon. Unfortunately, now it’s only on the really high numbered cartoon cable channels.

I don’t like reality TV much. I only watch Survivor and some other things because my sweetie likes them.

My dh will be totally bummed that he missed Bullrun. It sounds like something he would like.

Now that we have DVR and I can save shows for late evening when the kids are in bed and the writing brain is fried, I think I’m going to be in trouble!

Richard wrote about his Bullrun experience. You can read it here:
blog.myspace.com/xjguy
XJGuy

Though my city is the nation’s biggest market for reality tv, I’m not really contributing to it. I don’t have cable, so I miss a lot of the fun ones (I did catch a couple episodes of Bullrun when I was house-sitting though!), and I feel like most network ones could be half the length – all the time spent rehashing and attempting to build suspense… I just don’t have the attention span!

I’d love to be on The Amazing Race though. And I’ll confess that the “My Big Fat Obnoxious” reality shows were a guilty pleasure. I shouldn’t like seeing people be made fools of, but I do! 😉

I don’t have cable tv, but wondered how our Richard fared. 🙂 I’m glad to hear the team did so well, and more especially that they did it on their own; so very romantic heroish. I really do think it’s says a lot about them. There is simply something appealing about someone willing to lay themselves on the line; no one to blame if things go wrong. I’ve seen a few of the reality shows and find the alliances disturbing because there is the underlying understanding that sooner or later someone will be betrayed. It bothers me. So good for team Cerqueira! BRAVO!!

Deb, I’m sure there will be reruns of Bullrun. There are reruns of EVERYTHING.

Lindsey, I have to agree with you about the rehash. I have found the second night of DWTS as deadly boring except for the last five minutes.

Judy T, I agree with you about Richard and his brother doing it on their own. Much more admirable!The alliances in Bullrun were mystifying to me. I could not figure out why some were “in” and some were “out.”

Diane, when does “Clean Sweep” run on TLC?

I don’t have time to watch a lot and when I do I want something that makes me happy.

IMHO too many reality shows seem contrived to showcase the worst in human nature. I was scanning and caught a few moments of The Biggest Loser. At a tense moment they put all the contestants in a room with a bunch of desserts. It just seemed cruel so I clicked on.

OTOH I do like makeover and decorating shows. All the fun snark about the people’s old clothing or decor aside, there’s a transformation and a happy ending. A lot like romance IMHO.

My favorite shows are What Not to Wear (both versions) and Changing Rooms, the British version of Trading Spaces. Hearing all the accents brings back fond memories of my 3 year assignment in the UK. 🙂

Keira,
I can’t find Clean Sweep anywhere on TLC! But they still list it on their list of shows.

Elena,
I agree with you about some Reality shows showcasing the worst in human nature and I believe I would have flicked the stations from that episode of The Biggest Loser, too (Although I can see the utility of the exercise-one must encounter desserts sometime in one’s life; One may need to be assured one can avoid them).

I love your analogy about the makeover shows being like romance with their happily-ever-after! I knew this blog was relevant……
It does explain my fascination.

I am not a fan of Trading Spaces, British or US. It seems to me that they always do horrible things to a person’s perfectly nice room–and the designers are always ignoring the owners wishes….not that I haven’t watched these shows, obviously.

Another Brit show that has disappeared but one I LOVED was Location Location Location. Like House Hunters, it takes a potential home buyer around to various houses on the market and the buyer selects one.

Another show I love is Cash in the Attic – British version preferred. I love seeing the treasures in British houses and love the auctions. They always seem to be auctioning off some wonderful Regency table or bureau for under a hundred pounds!!

I loved the older British What Not To Wear with Skinny Trinny and Scary Suzannah. I would have put up with monstrous abuse to go shopping with them, but I learned so much from that show.

Trinny and Suzanna were the ones who got me hooked on this makeover stuff! I’d have let them tear at me, too. What fun they are! I just can’t find them on TV anymore!

Alas, no reality shows on my tv. . . except for the news, but who wants to talk about that reality, right? LOL 🙂 Today I saw a commercial for a new one while watching Guiding Light. . . ah, Pirate something or another. From the much shorter promos before today, silly me thought that was a drama show coming. But alas, nope, people on an old ship looking for treasure. LOL

Lois, who still, in the end, wouldn’t watch either way.:D

Well, Lois, not everyone gets bitten by the bug. Glad you have been bitten by The Guiding Light. I have to stay away from Soap Operas because they are addictive!!!! I must save some time for writing.

In high school, I watched Days of Our Lives and in college All my Children. LOVED them, but I haven’t seen them in years!

Good thing I don’t get the Style network or I would watch all the time. I love the TLC What Not to Wear! (At times, I’ve vaguely considered hiding anything good in my closet and pretending to be a total schlub, so I can go on the show and get $5000 for shopping AND a makeover!!!)

I don’t need to watch reality shows, since the Global Conspiracy is already filming my every move. I just wish they would quit beaming messages via microwaves to the fillings in my teeth.