How Wealthy Is Mr. Darcy–really? 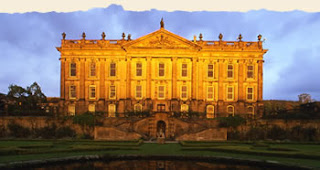 I came across an essay with that title recently in an old copy of Persuasions, the publication of JASNA (Jane Austen Society of North America), and it made for some fascinating reading. One of the major themes of Austen’s books is money–who has it, who doesn’t, what size house can they afford, and can they marry, should they marry, must they marry?

Naturally I now can’t find that issue and the article,* but fortunately I took notes, and I also came across this wonderfully useful site, www.measuringworth.com where you can translate the value of the pound from the thirteenth century into modern (2006 British pounds) currency, based on the retail price index. If you double that figure, you get, more or less, today’s $ value. As a rough guide, for calculating yearly incomes, for instance, multiply by one hundred.

Quick currency lesson/refresher: 12 pennies (d for denarius) make a shilling; 20 shillings (sh or s) make a pound (can’t find the symbol on blogger, but it’s a curly L for libra). Then there are guineas, which are a pound and a shilling, and used for some items–wages, horses, carriages, gambling debts–mainly luxury items. Sometime I’d like to research what was priced in guineas and what wasn’t. Anyone know? These are both sides of a golden guinea from the first decade of the nineteenth century.

The article took some prices from Jane Austen’s letters of 1810 and I translated these into the modern equivalent (rounding them up to the nearest 50c). Jane liked silk stockings which cost her 12s a pair or about $65–what you’d probably pay now for silk stockings by Prada (yes, it was an excuse to go onto ebay). She had a cloak made for 10s, about $54, which seems quite cheap for tailor-made clothes. Meat was 8d a pound ($3.50), butter a shilling a pound ($5), cheese 9 1/2d a pound ($4)–fairly close to our prices. But fresh salmon was a whopping 2s 9d a pound for a whole fish, $14–presumably because of the expense of shipping it (anyone know which rivers were the salmon rivers then? I’m guessing the Avon–I think the Thames, coming back now as a salmon river, was too polluted). A copy of Pride & Prejudice cost 18s–$94! She paid 30 guineas for the piano at Chawton, or $3,282–about what you’d pay now for a superior upright.

The most telling figures I found, however, were for the price of a quartern, the four pound loaf, which cost 11 3/4 d (eleven and three farthings) in the period 1800-1804, but by 1810 the price had risen to 2s 6d (half-a-crown), or from $6 to $13. This was the staple food of most common people and laborers made probably only a few shillings a day–life was very hard at the bottom of the social scale.

And now it’s question time. What’s your favorite money-related scene in something you’ve read or written?

Sign up for the Riskies newsletter at riskies@yahoo.com and learn how to spin straw into golden guineas. Or not. But put NEWSLETTER in the subject line.

So by that conversion Darcy has a million a year. Not too shabby. So perhaps the use of Chatworth in the recent P&P wasn’t quite as over the top as I thought.

That conversion sounds generally useful but I am a bit skeptical about using it for specific items. I imagine some things were cheaper and some more expensive than they are now and they also varied by region and whether you were in the country or city.

Oh I still need to caffeinate!

Obviously the numbers you list for things are correct, what I meant to say was I doubt you can take the cost of some item today and use the conversion to figure out what it might have cost then.

As for favorite money-related scene it’s probably the one in S&S where that poisonous sister-in-law keeps convincing her husband to lower and lower what he will do to support the Dashwood sisters and their mother. One of those villains you just love to hate.

Janet,
I’m wrestling with the money issue right now in my current WIP. What would be a decent widow’s portion, enough to maintain a Mayfair townhouse and servants? Then I go crazy because I forget if the money is invested in six-percents or what.

I guess I am surprised that the Austen’s could afford Jane’s pianoforte at that value. And I’m shocked at the price of a book.

I love money stuff like this. Janet and I were just discussing this when we had dinner recently (ooooo the scallops were divine!). I keep a spreadsheet of this stuff, and I’ll be adding all of this in. Thanks so much!

I don’t know if any of this will help you Diane, but here’s a bit of info to chew on:

I know that one of the famous Misses Berry declined an offer of marriage because she didn’t think they could live on what he could provide (I think the comment was something about a couple, residing in London, requiring about 1200 pounds year to get by a the least; so that’s about $120,000 which sounds about right to me in modern terms).

And I’ve got notes from Fanny Burney’s bio that say that another of the queen’s ladies got a house for life plus 300 pounds a year when she retired from court (1785).

Curates seem to have livings that mostly come in at about 100-200 pounds a year (plus a house).

Edward and Elinor in S&S think that 350 pounds a year (plus a house) will not be enough to support them.

James Morland in NA has a living of 400 pounds a year (plus a house), as well as an estate of equal value on the horizon as his inheritance.

My current heroine has 2000 a year (in 1828) from her late husband; he left the estate (as would have been common) to his children from his first marriage. Hmmm, I said, that would like be living on $150,000 a year in (absurdly overpriced) San Francisco. Very nice indeed, but not hugely posh. No, we decided, more like $200,000 a year.

Our discussion, over extremely yummy cake and tea, reminded me of Dorothy Parker’s wicked little story, “The Standard of Living.” Anybody know that story? And — Bay Area folks — do you think we were right about the late-Regency/contemporary San Francisco money comparison?

Diane and Kalen,
I have more to send you both! Later…
As for money episodes, I love all of the stuff starring Sir Walter in Persuasion.
Elena, you’re quite right about some things being ridiculously expensive–fabric, for instance (as I remember, about $35/yard for cotton). It makes you understand why people had so few clothes and why a new gown was such an undertaking, and why clothes were rigorously recycled.

Well, my favorite money-scene in something I’ve written is when my Atalanta fleeces the hero at piquet, all while still lulling him into thinking he’s the much better player, and she’s just really really lucky. 🙂 (Sucker!)

And I agree with Elena — my favorite money scene in something I haven’t written is probably the one in S&S when sister-in-law convinces John Dashwood that the four womenfolk will be so much *more* comfortable with less money. How delightful not to have to keep up a carriage!

I also love the bit when Marianne and Elinor discuss money — Elinor being practical, and wanting a decent income, and Marianne insisting that love and poverty would be delightful. Of course, when it comes down to brass tacks, they realize that Marianne’s “poverty” requires much more money than Elinor’s sensible demands! (Yes, I have *known* people like Marianne, as far as money goes, and I find them alternately funny and annoying!) 🙂

The branch of history that looks at this sort of thing is called Economic History which I did at university.
Basically it is very difficult to give exact modern day equivalents because the prices in a basket of goods changed so much in relation to eacxh other. An example would be sugar. As the 19th century goes on, and sugar prices decrease, you get an upswing in the production of sweets.
You also have to factor in the problem of people being land rich but cash poor. And because of entail being unable to sell their wealth. The problem of falling argricultral rents is another factor.
Equally land is not uniformly priced in England. During the period in question, the South East suffered dreadfully from the agricultral depression while the North with its new shipping and manufacturing industries boomed. A situation that was reversed in 20th century.
FWIW

Yes, I think figuring out how the relative value of things changed is one of the most difficult and interesting areas of research!

Nowadays, for example, in the US in particular, food and clothes are extremely cheap. (I would hazard that clothes are at an all-time low.) But housing and labor are fairly pricey (relatively speaking).

Whereas during the Regency, labor was very cheap!

I do think that money (at the low end) is something a lot of novelists get wrong. I read a science fiction novel recently that was largely set during the Regency, and people were constantly tossing very large sums to beggars. Hard getting it through a modern mind that a penny was once worth something! 🙂

I do think that money (at the low end) is something a lot of novelists get wrong. I read a science fiction novel recently that was largely set during the Regency, and people were constantly tossing very large sums to beggars. Hard getting it through a modern mind that a penny was once worth something! 🙂

Very true! Witness the fact that the penny was not the smallest unit of exchange. Drives me nuts how people in some books are constantly tossing gold coins around. Too much Dungeons and Dragons, maybe. 🙂

I think another confounding factor is that what was considered an appropriate standard of living varied considerably depending on your class and location. I remember Sir Walter in Persuasion declaring that a baronet must be seen to live like a baronet.

In a gift shop somewhere I picked up one of those little reprint books (from about 1830), called something like “The Poor Gentleman’s Book,” which analyzed in great detail how a gentleman could live in London on 100 pounds a year, if prudent about expenses. Of course, he couldn’t marry on that, and he could never have anyone over (this would be living in a single rented room), or afford to join a club. The details of the cost breakdown were very interesting.

I’m so glad Elena did the math because I was just going to demand that Janet do so, after raising that question in her header! (and because I’m too lazy and number challenged to do it; can’t remember what I pay for milk and I buy it 3 times a week!)

I, too, would be interested in tucking away a chart of what various things cost (because I’m ALWAYS needing it and can never find it when I do) as well as what would be considered survival, modest, well-off and nabob incomes in the country and in London.

Kalen, you’ve made such a spread sheet? Is it available on your website? Can we steal it? -g-

Thanks again to the Riskies and to Janet for a thought-provoking topic!