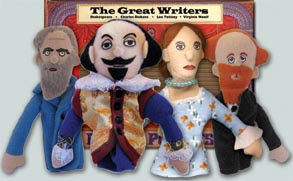 A friend just sent me the link to the Literature Map, and if you enter an author’s name (Jane Austen, say), it comes up with this nifty visual of authors who are similar to the primary name. The closer the names are to the original name, the more likely it is that a reader will like both of them. Certainly that is true for me with Jane and the Brontes. I think it’s odd that Raymond Chandler is on the list; I love both, but I don’t think they’re similar.

Unless the universal themes of people and their petty wants and desires is their common bond?

What else do readers of Jane Austen read?
The closer two writers are, the more likely someone will like both of them.

Anyway, I was talking about peer-to-peer recommendations on my own blog, and it seems as if this a more mechanized version of that. Cara has been raving about Diana Wynne Jones for eons now, and seeing her name here reminds me I’ve been meaning to check her out, based on Cara’s recommendation.

Anthony Trollope I tried, and hated. In general, though, I’ve read a lot of these other authors and do like them, so maybe there’s something to this? What do you think? Do these kinds of recommendations work for you? Do you rely on a good friend for book recommendations? How do you find new authors?

Megan
PS: The puppets are from this amazing site.

Great, Megan, yet another website where I can waste time! 🙂 I’m not sure I understand some of their reasoning, but I do like many of those authors listed with Austen..

And you linked to Unemployed Philosophers Guild! I LOVE them!

I tried it with Laura Kinsale and came up with a mix: predictably, some other favorite authors but also some authors whose work I’ve never read and some whose work I have read not loved though I can see some similarities. Interestingly, Susan Elizabeth Philips comes up twice. I wonder if that’s a glitch.

Some of these recommendations are weird! I think it uses a tool similar to Amazon’s recommendations: not that Camus and Wilde are that similar, but that multiple people like them both.

BTW, Megan, when you get around to reading Jones, I suggest you don’t just pick a random one. I recommend starting with Charmed Life, or Howl’s Moving Castle, or (if you want length, complexity, some satire) The Dark Lord of Derkholm, or (if you want some modern-world satire) Deep Secret. 🙂 (The latter two are adult novels, more or less, and the first two are middle-grade, more or less.)

I did Lloyd Alexander, who I’ve hooked my kids into. One of his was Suzanne Enoch!

Thanks for both fun links, Megan!

Deb, Lloyd Alexander was one of my favorite writers growing up (my mom, who read the books to me, loved them to). I’m fascinated by the connection to Suzanne Enoch. Both talented writers, but what else links them?

I just did it with myself and found a number of writers I read and several I’d say have influenced my writing (Elizabeth George, Dorothy Dunnett, Marion Zimmer Bradley). Interestingly, the closet to me on the map, Manda Scott, is someone I’ve never read, though I do have one of her books tbr.

I love that Nora Roberts is there with Jane Austen!

Interesting mix of authors! I think Cara is right about how the group is picked. So the selection may be somewhat skewed by the kind of person who surfs the web and messes around with that kind of website.

(In the old days before the web, there was a lot of bias like that–most of the people with Internet access were computer professionals, college students, and people in technical fields, which makes for a very non-representative sample.)

I guess I get ideas for new authors in different ways–mostly recommendations from friends, some from reviews or other such discussions, and some just by browsing around in bookstores or libraries. Something online booksellers haven’t yet replaced. 🙂