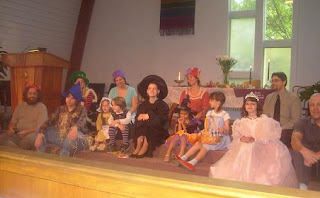 Last Sunday at our UU church, the theme was the spiritual journeys in The Wizard of Oz. Early in the service we reenacted the story, accompanied by a wild interpretation of the film’s music by Bobby McFerrin. All in about 8 minutes if you can imagine that! Wacky and fun.

There’s a lot any storyteller can learn from this story. It’s been used as an example in Debra Dixon’s workshops on Goal, Motivation and Conflict and analysed in terms of the Hero’s Journey.

Readers and/or viewers love it, for the fun but also the universal themes: misfits trying to find their place, the common insecurities of feeling one is not smart/kind/brave enough, coming of age, seeking something and being made to face our worst fears.

My family and I aren’t purists about our own Oz obsession–we like ruby slippers better than the silver shoes, for instance–but we’ve also read all the Oz books by L. Frank Baum and a bunch of the other Royal Historians of Oz. We’ve attended Oz events and in the past I’ve stayed up late to make a Princess Ozma of Oz costume for Halloween (not easily found at Target). đź™‚ Besides the classic film, we also love “Return to Oz” with Fairuza Balk starring as Dorothy in a tale based on elements from The Marvelous Land of Oz and Ozma of Oz.

We love Oz not just for the characters but because it’s a world of its own, like Middle Earth, Star Trek or Regency England. Regency fans often love other shared worlds so now I’m wondering how many Oz fans we have out there. Unless you live with some remote tribe somewhere (with Internet access if you’re reading this!) you’ve seen the movie, but have you read any of the books? What do you think of the movie adaptations? Have you ever attended an Oz event or dressed up as an Oz character?

Which Oz character do you relate to most closely? I’ve always felt an affinity to the Cowardly Lion myself. đź™‚

Which other shared worlds do you enjoy visiting and what makes you love them?

Elena, the rather large Munchkin in the purple hat
www.elenagreene.com

Subscribe to the Riskies’ newsletter to get the latest news from the shared world of Risky Regencies! Just send an email to riskies@yahoo.com with “newsletter” in the subject.

11 Responses to Welcome to Oz