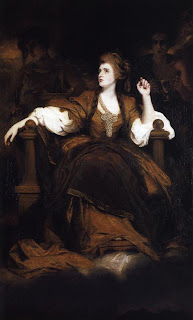 Another Regency birthday to celebrate–that of Sarah Siddons, considered one of the greatest actresses of her time, who was born July 5, 1755 in Brecon, South Wales (in the Shoulder of Mutton public house). She was born into the business; her father Roger Kemble owned a small traveling theater company. When she fell in love with a fellow actor, William Siddons, her family objected and sent her off to work as a maid, where apparently her employers enjoyed her dramatic reading aloud. But they relented, and Sarah and William married.

She first played London at the age of 20, but failed to impress audiences–possibly because it was too soon after the birth of her third child. After touring the provinces she returned, and became the undisputed diva of Drury Lane–the Queen of Tragedy (or the Queen of Rant as the caricaturists would call her). During her performances, the audience would weep and sometimes faint. 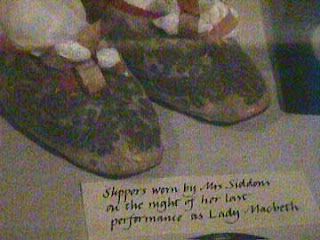 She gave readings to the Royal Family and elocution lessons to their children, and she was the first woman to play Hamlet. After a twenty year reign on the London stage, she gave her farewell performance in 1812 in one of her signature roles, Lady Macbeth.

I find the theater of the Regency period fascinating; if ever I have the privilege of time travel I am definitely going to attend the play and the opera.

What would you do on your time travel trip?

Sign up for the Riskies newsletter at riskies@yahoo.com with NEWSLETTER in the subject line. Every month we will make you weep and faint (but in a good sort of way).

I would definitely see theatre too! I want to know exactly what their acting styles were like. It’s all very well to read a description — but an actor was “sudden” or “natural” or “slow” compared to what? Impossible to really know without seeing!

Spend some time with Percy Shelley. Oh, I know! Laughing. But I’ve often wanted to see Florence on a walk with Percy.

Hard to decide what I’d want to do on a time travel trip! Theatre would be in there though it’s not my passion as much as it is Cara’s. I’d want to wander around the streets of London, visit shops and parks and find out what the sights, sounds (and yes, maybe even the smells) were like. I’d also like to attend some of the amusements we read about–Vauxhall gardens, masquerades, that sort of thing.

Janet, what a great post. I saw a wonderful exhibit at the Getty museum in LA on Sarah Siddons several years ago. I would also want to go to the theatre to see if all the fuss about Edmund Kean was true. Also the famous Kembles. And to see what plays they were doing back then apart from Shakespeare and the restoration plays. As an actress, I would find it fascinating to compare acting styles to our own today.

Now, exactly how long would this time travel voyage last? There is way too much to fit in. 🙂

I’d like to go to the theater, as well. And Almacks to see if it’s as dull as rumored. And–and–and…

I’d definitely want to go to the theatre and the opera (along with a whole host of other things–think of all the research questions we could answer!). Last time I was in London and saw “La Cenerentola” at Covent Garden and learned from the program that the English premiere was in Janaury 1820. Which happens to be just when the book I was writing takes place, and I knew I needed a sequence at the theatre, so I was able to work “La Cenerentola” in (great excuse to play the music over and over again). The Covent Garden program even had the 1820 cast. Btw, at the risk of blatant self-promotion, I just last week posted about Regency Theatre on my websie (both in the Dear Reader and in a letter to one of my ficitonal characters, a playwright, in the Fraser Correspondence), which made it particularly fun to read about Sarah Siddons.

I know one of the very first things I would do is get a first edition copy of Pride and Prejudice. I guess it would be a little hard to get it autographed since the author wasn’t known at the time, but I could always ask JA to sign something else. LOL 🙂