Well, it’s been a month since I returned from my trip to England & France, so it’s about time I shared some pictures, right? 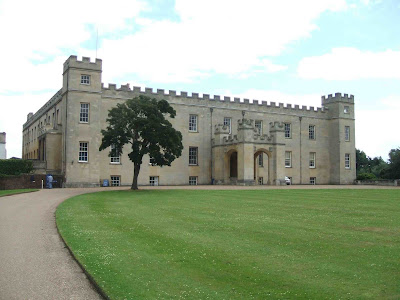 First, a picture of the front of Syon House.

Syon Park is located near London (and you can tell — it’s like a country house paradise, ruined by the constant noise of planes flying overhead), and bills itself “London home of the Duke of Northumberland.” (Ah, yes, that’s the sort of second home I could live with — I could even tolerate the planes.)

The next photo is of the back of Syon House.

Which is really too bad, because Syon Abbey was apparently quite unusual… It was a Bridgettine Abbey, housing both men and women, and extremely wealthy. Recent architectural research argues that the Abbey Church was unique in England, and quite huge. 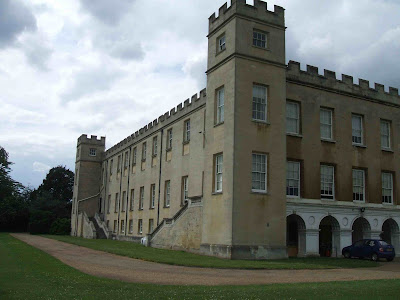 Our next photo is, of course, a side view of the house!

In 1547, the Duke of Somerset (then Lord Protector to King Edward VI) took the estate, and began constructing Syon House in the Renaissance style. Of course, in true Renaissance fashion, Somerset eventually fell out of power, and was executed in 1552.

The house itself is a square house, built around an internal courtyard, giving the interior a lot of sunlight, and an airy, almost Mediterranean feel. 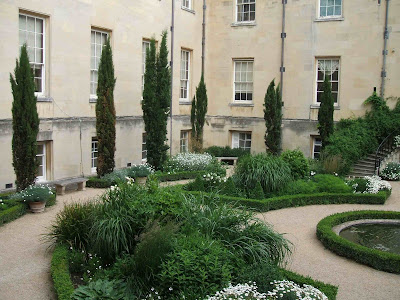 Here we see the interior courtyard of the house.

In 1604, James I gave Syon to Henry Percy, the 9th Earl of Northumberland (and descendent of Shakespeare’s “Hotspur.”) Unfortunately, soon after this, his cousin took part in Guy Fawkes’s attempt to blow up Parliament, and the earl went to the Tower for fifteen years as a suspected conspirator. 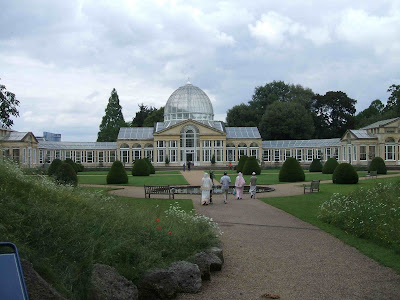 The next four photos show one of the most stunning features of Syon Park: the Great Conservatory.

The 2nd Duke was an army man, and fought in the Seven Years War and the American Revolution (where, among other things, he commanded the relief force at Lexington). 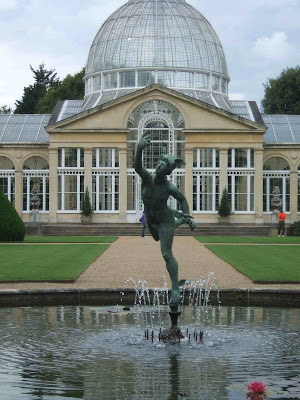 The Great Conservatory was built between 1826 and 1827. The architect was Charles Fowler (who also designed the covered market at Covent Garden); the masonry, of Bath stone, was by Thomas Cundy; and the metalwork was by James Richards of Birmingham.

The whole estate is really quite gorgeous. Though the outside of the house is plain and rather uninspiring (it’s no accident that brochures advertising the estate tend to show the conservatory rather than the house), the interiors are utterly fabulous. Adam did a lot of the interiors, including the famous double cube room. Inside photos are banned, so I have none, but if you want to see the interiors, you can see some here: http://www.syonpark.co.uk/ 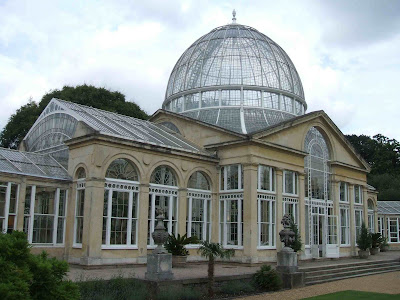 Todd and I did get rather lost walking from the train station to Syon Park — our directions were poor, and construction had made signs hard to see — so by the end of the day, our feet were killing us. But except for that, it was really a lovely day. 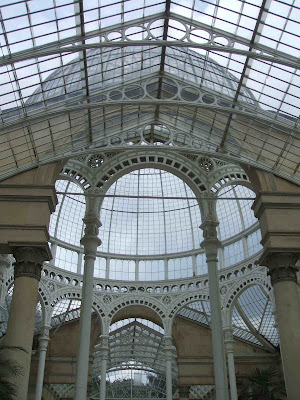 Indeed, if you take one day trip from London to see a stately home, I think Syon would be my recommendation. I’ve seen most of the stately homes and villas near London, including Ham House, Marble Hill House, Chiswick, the Queen’s House in Greenwich, and Kenwood House, and I found Syon the most enjoyable.

The grounds are lovely too — but more on that later.

One particularly interesting thing we saw — some archeologists (and a television reality show about archeologists, or some such thing) are currently excavating the remains of Syon Abbey. (This is how they now realize just how huge the church at Syon Abbey was.) 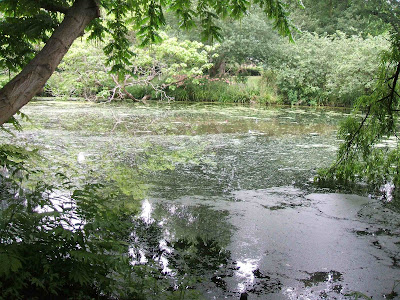 As I mentioned, the grounds are lovely. We had neither the time nor the feet to do much walking around, but we did stroll a bit on this river path.

In an attempt to bring in more money, part of Syon Park has been made into a children’s playground, the fancy sort that one pays to visit. There is also a large commercial gardening center — which seemed quite popular.

Some guidebooks were rolling their eyes at all this sad commercialization, but it seems to me that children’s playgrounds and garden centres make more sense than some of the alternatives. 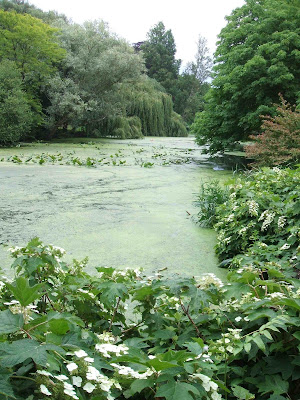 Well, that was my trip to Syon! In the coming weeks, I shall have more photos for you all, and info about Regency-era Nice, among other things. (I have SO many photos! The blessing and the curse of having a digital camera.)

And remember: in two weeks is our next cyber-meeting of The Jane Austen Movie Club! (I had erroneously said it was next week — sorry, I can’t read a calendar!!! Yes, Cara, it’s ALWAYS THE FIRST TUESDAY OF THE MONTH. Which means August 7.) This time we’ll be discussing the version of EMMA starring Gwyneth Paltrow and Jeremy Northam. So if you’ve ever seen it, please show up and share your opinions!

So…the questions for today are: which is your favorite photo? What was Henry the Eighth’s problem, anyway? What’s your favorite country house or villa? How would you like to have Syon as YOUR second home? And if you’ve ever been to Syon, what did you think?

Cara
Cara King, author of MY LADY GAMESTER, which has not a single country house any it, not even of any kind

Oh, what a wonderful trip! I’m going to have to put Syon Park at the top of my list for my next trip.

Amanda and I went to Syon Park. It is beautiful, just like Cara said.

It is very pretty. I have seen/been to alot of those places in England. And places like those are always fun to take a tour on. 🙂

Thanks, Mallory! I appreciate that, especially as I had a little trouble wrangling a few of the photos I was trying to post… 🙂

Having at last staggered out from under the massive weight of Harry Potter and the Deathly Hallows (no spoilers!)…

…I will just comment a little on our trip to Syon House. Cara did a lovely job with the photos of the outside. Syon House really is quite amazingly beautiful inside, as well…it’s a pity we couldn’t take pictures. But we did buy the guidebook, which has many fine pictures in it.

(A friend of mine, who will remain nameless–’cause you know who you are, right, Dave?–once made fun of me for buying guidebooks of all the old houses and castles I visited. But now I can look back through them and remember all the trips I’ve made. So, nyaahh!)

Two things that make the house really amazing are the almost unaltered Adams interior (at least, in the state apartments that are open to the public), and the fact that the family still lives there part of the year. Many stately homes now belong to the National Trust or English Heritage–and I am grateful for that, since so many extraordinary buildings have been preserved that way–but there is something remarkable about the continuity of tradition.

Cara, thanks for the lovely photo accompaniment to a great post. I’ve been to Alnwick Castle, the D of N’s country seat. I’d love to visit Syon.

Todd, the family lives at Alnwick, too. BTW, Hogwarts (movie) is based on Alnwick and the first movie was filmed partially there.

I LOVE their library.

Thanks for the great pics, Cara. My favorites were of the river. Gorgeous.

Todd, the family lives at Alnwick, too. BTW, Hogwarts (movie) is based on Alnwick and the first movie was filmed partially there.

Well, I assumed they had another place. All very well to have a little cottage near London like Syon House, for when one needs to go to town, but one wouldn’t want to spend most of one’s time there.

I LOVE their library.

Actually, the library in Syon House is pretty cool, too–it’s what was originally the Long Gallery.

Thanks, Jane! I’m glad to know you like my pics. I’m never sure what people want to read on the blog, and I don’t want to be one of those folks who trap unwilling people with slide shows of their vacations… 🙂

By the way, in my first version of this post, I said the Jane Austen Movie Club is next week — I was wrong!!! (No, I guess I can’t read a simple calendar.)

Emma will be on August 7. (Yes, Cara, ALWAYS THE FIRST TUESDAY OF THE MONTH. Which, oddly, is not the same thing as the last Tuesday of the previous month…)

Cara wrote, “I’m never sure what people want to read on the blog, and I don’t want to be one of those folks who trap unwilling people with slide shows of their vacations.

Trap me. Oh, do. Do. Do. Especially if it means gorgeous photos of piddling “cottages” like Syon.