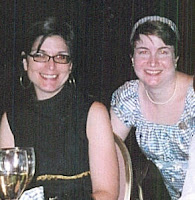 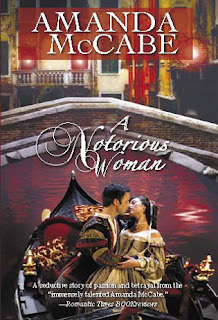 A Notorious Woman sounds like a wonderful read.
I enjoyed the interview. (also the info on codpieces – lol).

I normally just lurk on this blog – but I just had to say that it sounds like an incredibly intriguing setting! You don’t see a romance set in the Renaissance period everyday. I’ll definitely keep an eye out for this book.

I find the Renaissance period fascinating as well. Thanks for the interview. A Notorious Woman sounds amazing, by the way!

Oh, I can hardly wait to read this book!
Welcome, Li, and everyone. We love lurkers just as much as our blog commentators.

Now for a REAL codpiece, check out Gerard Butler in 300!

Love the renaissance! What a treat. And thanks to the both of you for posting this interview.

A story set in Venice….I want to read it! It sounds so good. A Dangerous Beauty is one of my favorite movies. I have it on tape and CD. I think I’ve watched it as least 50 times. No exaggeration here. lol If Marc has a little bit of of Marco in him, I’m going to love it.

COngratulations! I can’t wait to read it.

Fantastic! I wrote a short story set in Venice during the Italian Renaissance and had SO MUCH FUN! This sounds like a great read. Can’t wait to get my hands on it.

As for perfume, I can’t wear Chanel #5, either. Smells awful on me. Chanel #9, however, smells terrible in the bottle, but it works with my chemistry.

I think you’re very brave tackling (is that really an appropriate word?) codpieces, Amanda, because I think they’re incredibly funny. But congrats on the book and I’m going to look for it in the store later today!

By the way, Amanda, I LOVE your cover!!!! Ecstatic sigh…

And I can’t wait to read your book! I adore Venice, and how colorful the Renaissance was….

BTW, Kim, I loved Dangerous Beauty too! I think the verbal wordplay in it is fantastic — one rarely gets that in a movie (or even a book) nowadays…

Welcome Li, and other lurkers! I love knowing that you’re out there. đź™‚

Diane–now, was GB’s costume a “codpiece” or a “loincloth”? Important distinction. đź™‚

Kim W–I admit I DID picture Rufus Sewell a bit when writing this story! I also loved him in the movie “Cold Comfort Farm,” where he managed to be hot-looking and ridiculously silly/funny at the same time…

Sela–isn’t is funny how different perfumes work? Mademoiselle also smells weird and chemical-ly in the bottle (to me), but light and nice when I put it on. It makes me feel “French” when I wear it, LOL.

Janet–I actually sort of just “ignored” the fact that the men in the story would wear codpieces. Except when the heroine notes that the hero has no need of exaggerated/padded codpiece styles, tee hee.

Kim W–I admit I DID picture Rufus Sewell a bit when writing this story!

You know, I always liked him fine as a villain, and I loved him in “Dark City”, but I didn’t get his appeal in a romantic sense until I saw him onstage in Stoppard’s “Rock and Roll.” Maybe it’s because I’d never seen him smile before… đź™‚

I can’t wait to read this book! It sounds fantastic and I know I’ll enjoy it. Let’s just say–I’ve enjoyed all of Amanda’s books.

I also enjoy a more complicated heroine, either in how she lives her life or what she believes.

I am thrilled to report that “A Notorious Lady” was facing out on the shelves of my Borders today. (And where I live in CT is not a very romance-friendly area)
Naturally I snatched up a copy and told everyone in the store what a wonderful book it is. Having had a chance to read the WIP, I can assure everyone that it is absolutely fabulous! As Ammanda says, her heoines keep evolving and Julietta is one of her most complex womenâ€”she’s dark and vulnerable and mysterious . . . readers will love learning her secrets. And Marc is a perfect match.

what an interesting job – dabbling in alchemy. With your love of perfume, do you collect perfume bottles/containers or have you ever thought of doing this? Thanks.

What synchronicity, I just watched the film PERFUME today. It was interesting, and Alan Rickman was in it. đź™‚

My son was lucky enough to visit Venice this summer and reported that it was smelly and touristy. His opinion shall not affect my enthusiasm for A Notorious Lady. I’ve always been intrigued by the masks, etc. And there’s something deeply psychologically unsettling about a city built on water. It’s dream-like. Count me in.

I’m definitely going to be on the lookout for A Notorious Woman – it sounds like a really great book!

Amanda, squee! Your interview! And how gorgeous you look in that Regency outfit. Last year’s??

Diane, what I want to know is whether GB was wearing a bologna or a huevos rancheros in 300.

AndreaP, *waves madly* hi to you! Thanks for the tip on Borders. I was going to wait till Wednesday, but now I can buy it sooner!!

I’m waving back Keira! It was such fun to meet you in Dallas. Doesn’t Ammanda have the prettiest dresses in the universe? I can’t wait to see what her mother whips up when she asks for a Renaissance gown! BTW Ammanda, have you broached the subject with your mother? That would be a killer dress, so make sure to beg and grovel. We expect to see it in San Francisco!

Jane, tell your ds to visit in winter next time. Venice in February is perfect. Not cold at all and no smell. Not to mention no mobs of tourists.

Robynl–I do have a (very) small collection of perfume bottles! I keep them in a glass cabinet in the bathroom, they’re a mix of newer ones and a few antiques I’ve received for presents or picked up on trips (including a dark blue one from Murano!). I’ll have to take a picture of them and use them in a post here.

Janegeorge–“dream-like” is such a perfect description! It doesn’t even feel like a real place, more like a magic, fantasy city. Like Sela says, visit in the off-season–I went in winter, cold but almost no people crowding up the churches and museums. I’ve heard that in summer it’s almost impossible. And in the book, I do mention the smells of the canal, but I bet in the 16th century EVERYTHING smelled bad (including the people–except those who bought Julietta’s perfumes, LOL)

Keira and Andrea, thanks so much for the compliments on my costumes!! I’m working on persuading my mother to work on something “different” for next year. (And Keira, the blue dress WAS from last year! I also have a white muslin trimmed with blue ribbons, a pink and white one, and a satin pelisse in Regency styles…)

Amanda, this book sounds *fabulous*! I love dark stories and complex, experienced heroines, and Renaiisance Venice is such a fascinating setting! (I too could watch Romeo & Juliet and A Dangerous Beauty over and over again). The next two books in the series sound very intriguing too. Was it hard to switch to the mindset of Renaissance characters after writing about the Regency?

What a fascinating book. The setting has me completey captivated and I love reading about that period as well. Wonderful interview!

I’m always up for a different time period/location from the usual historical romance, and will definitely look for your new book! Chanel #5 is my favorite…thank goodness it doesn’t smell like motor oil on me. Also love Yvresse (which used to be YSL Champagne, but I think the name Champagne is trademarked so they had to change the name of the scent. It’s very hard to get…smells drinkable,like peaches!). Perfume was definitely a necessity in your time period…I shudder to think what smells it masked!

I love historical romance, but every once in a while, I need a setting that is a little different. A Notorious Woman sounds like just what I need. Renaissance Italy is truly one of my favorite periods of history. I look forward to reading your book.

It was a CODPIECE and what was underneath was all real….

Tracy–there were a few challenges moving from the 19th century to the 16th! Most of it was external stuff–the Renaissance was so bawdy and gritty, in more of an “outward” way than the Regency (the Regency was certainly plenty bawdy and gritty, but not so “out there” with it, if that makes sense, LOL). And I sometimes found myself writing bits of dialogue using Regency slang that had to be changed. đź™‚

Maggie–I remember smelling YSL Champagne once! It was sooo yummy and delicious. But then I never could find it again. Now I know why, it has a whole new name!! Champs Elysees is also a very nice scent.

Uhhhhhh, Diane, just HOW are you so sure what’s beneath the codpiece is real . . . if you don’t mind me asking . đź™‚

The interview was great. I cannot wait to read the book. Amandas books are great, I’m going to have to buy this one if I don’t win. Have a great weekend.

I am intrigued by the use of the Renaissance setting in this book. Sounds like an unusual story. Enjoyed the intervirew!

I read the piece about you in the RT magazine. Very cool!!

Talking about being “out there,” did you find yourself changing how you write the “getting it on” scenes to fit the period? And if so, how?

In terms of clothing, what was the most difficult aspects of your heroine’s and hero’s clothing that you had to adjust to and make accomodation for in your plotlines?

Congrats for getting a book out in a less-explored time period. And I’m not surprised the Regency well is filling back up as a result. Switching gears can be such a smart move.

Can’t wait to read this one–I’ve even got a vacation coming up in a few weeks so it’ll be perfect!

Sorry I missed the party, but I look forward to reading the book! It sounds terrific. I’m a total history geek, too. (OK, I’m a total geek, full stop.)

I loved your interview! I laughed out loud when you discussed cod pieces. hee-hee! I can’t wait for your next book.

Get every new post delivered to your inbox
Powered By WPFruits.com
wpDiscuz
35
0
Would love your thoughts, please comment.x
()
x
| Reply