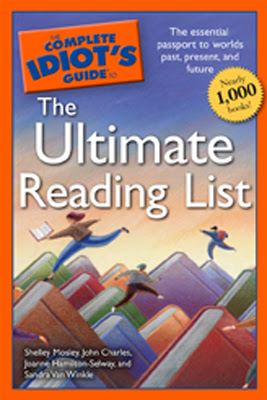 See this book here? It’s part of the Idiot’s series, which I’m sure you’re all familiar with.

This particular entry, THE ULTIMATE READING LIST (written by Shelley Mosley, John Charles, Joanne Hamilton-Selway, & Sandra Van Winkle), has lists of book recommendations in lots of different categories. The purpose of the book, as the authors state in their preface, is this:

As librarians, we love to read, and helping readers connect with the right books is one of the things we enjoy most about our jobs. So by putting together this list of old and new favorites, we’ve taken all the hard work out of your task of finding a good book.

There is a whole chapter of romance lists, and — hurrah! — one of these lists is devoted to Regency romance. Two “classic” Regencies come first — Heyer’s The Grand Sophy and Chesney’s Minerva — and then we get the list of seventeen recommended Regencies from the past ten or fifteen years.

When I first saw this list, I scanned it looking to see if I thought they did a good job — e.g. did it have Carla Kelly, Barbara Metzger, etc on the list — and to see if I knew anyone on the list.

I was very happy. Amanda McCabe! Yay! And they picked The Errant Earl — one of my favorites! Of course, I know Amanda deserves to be on the list, but she hasn’t been around as long as, say, Jo Beverley or Mary Balogh, so some folks might not realize it. (Yes, silly people do exist.)

So then I was happy, and went ahead and skimmed the rest of the list. And stopped short.

No, that wasn’t my name, was it? No, I must have misread. My eyes blurred, and I read the second Carla Kelly as a Cara King, didn’t I?

I was totally shocked, let me tell you. ONE book out. That’s it. And a book that, coming at the tail end of Signet’s Regency line, didn’t get a lot of notice.

(By that time, Regency didn’t even have its own page of reviews in Romantic Times Magazine — just a little box in one corner of the historical section.)

And you know what else is great? Megan’s on the list too!!!!

So out of a total of seventeen books, the Riskies have three.

Okay, yes, I can hear some of you grumbling, and you’re right! Elena totally belonged on the list. And Janet. And Diane should have been either there or on the historical list. But still…

Cara
Cara King, author of My Lady Gamester, starring the Ultimate Atalanta, who defeats the Malicious Malkham with her Mutant Gaming Powers