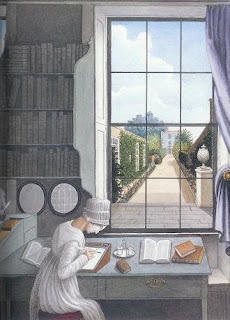 I recently read THE IMMORTAL DINNER, by Penelope Hughes-Hallett, subtitled “A Famous Evening of Genius and Laughter in Literary London”. The book centers around a dinner party held by painter Robert Haydon whose guest list included John Keats, William Wordsworth and Charles Lamb. There’s lots of interesting background information on the participants and their contemporaries.

For example, there’s an account of Coleridge composing poetry “in walking over uneven ground, or breaking through the straggling branches of a copse-wood” while Wordsworth preferred “walking up and down a straight gravel-walk, or in some spot where the continuity of his verse met with no collateral interruption.”

Maybe it’s presumptuous, but I love it when I read about famous writers with similar habits to mine. “Thinking walks” are part of my own writing process. I’m more like Wordsworth–I like a reasonably level path, to keep my mind free to focus on my story–which is a good thing as copse-woods are scarce in my neighborhood.

Another account that made me smile was this one by Marianne Knight, one of Jane Austen’s nieces. “I also remember how Aunt Jane would sit quietly working (which meant sewing) beside the fire in the library, saying nothing for a good while, and then would suddenly burst out laughing, jump up and run across the room to a table where pens and paper were lying, write something down, and then come back across to the fire and go on quietly working as before.”

I always keep a writing pad in my purse, one by my bedside, and one on the kitchen counter for just that reason. Ideas don’t always come while I’m actively writing–perversely, some of the best ones come when I’m doing something else. Perhaps it’s because sewing and walking, both rhythmic activities, loosen up the creative process for me as they do for other artists I know.

Do you have any favorite accounts of famous writers’ processes? Are there any quirky habits you use that help you be creative, whatever your field of endeavor?

And to anyone who sees a woman striding through a neighborhood muttering to herself, remember she may not be crazy. She may just be a writer. đź™‚

Elena Greene grew up reading anything she could lay her hands on, including her mother's Georgette Heyer novels. She also enjoyed writing but decided to pursue a more practical career in software engineering. Fate intervened when she was sent on a three year international assignment to England, where she was inspired to start writing romances set in the Regency. Her books have won the National Readers' Choice Award, the Desert Rose Golden Quill and the Colorado Romance Writers' Award of Excellence. Her Super Regency, LADY DEARING'S MASQUERADE, won RT Book Club's award for Best Regency Romance of 2005 and made the Kindle Top 100 list in 2011. When not writing, Elena enjoys swimming, cooking, meditation, playing the piano, volunteer work and craft projects. She lives in upstate New York with her two daughters and more yarn, wire and beads than she would like to admit.
View all posts by Elena Greene →
This entry was posted in Jane Austen, Writing and tagged Coleridge, Jane Austen, Wordsworth. Bookmark the permalink.