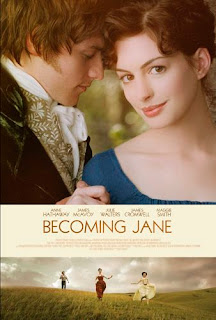 I asked my friend, author, and Pemberley co-founder Myretta Robens what she thought of the movie Becoming Jane and she sent me the following rant (see how I cleverly avoided having to think of fresh writing myself?). But before she starts, let me say we both recognize the importance of seeing something before judging it. She does admit, however, she went in with more of a closed mind than she would’ve liked.

Myretta Speaks:
Wrong, wrong, wrong! Becoming Jane is just wrong. Okay, I realize that for the regular movie-goer, this is probably a nicely filmed, affecting story. But for someone who is deeply and passionately interested in Jane Austen, it’s just wrong! And here’s why:

Location – Ireland is NOT England and the parts used for this film didn’t look at all like the bits of England they purported to be. And…Godmersham by the Sea? What the heck was that? Although Godmersham (one of the homes of Jane’s brother, Edward Austen Knight) is in Kent, and Kent has some coast, Godmersham is, most emphatically, not near it.

Historical inaccuracies – This is a big one. Almost none of this story ever happened. Yes, Jane Austen met and flirted with Tom Lefroy for a couple of weeks in 1795-6. There is nothing to indicate that she ever did most of the other things depicted in the movie. And that last scene was totally impossible. I could go on and on about these inaccuracies in serious detail, but you probably don’t want to hear it.

The gravest problem of all is the implication on which the film is based: That Jane Austen was a frustrated and mediocre writer until a man entered her life, introduced her to Tom Jones and taught her love. And the idea that some of her most sparkling prose was cribbed from other
people’s ideas. The premises of this film denigrate the genius and originality of Jane Austen. I am outraged on her behalf and on behalf of other women writers who are fully capable of telling their own stories.

Thanks, Myretta! Have you seen the movie? What did you think? And what do you think in general of historical fictionalized accounts of something that may or may not have happened?

I saw “Becoming Jane” the day it opened (“Secrets of a Lady” was moved to the month “Becoming Jane” opened, which gave me a sort of added interest in it 🙂 and blogged about it this week on my own website. I liked some things about it–the overall look (despite Ireland, steel-nibbed pens) and some very good acting. But Jane seemed way too self-absorbed to me to be the woman who wrote with such keen insight into humanity. Both the friend and I went with and I found ourselves most sympathetic to Jane’s rejected suitor, Mr. Wisley (he won me over by appreciating Jane’s writing). And yes, the implication that it took falling in love to bring out the great writer in her was…distressing.

I hope to see it this weekend, after which I will have more intelligent things to say about it than I do now! (Which is pretty much “Well, I really like James McAvoy…”)

I went to see a screening of the movie several days before it opened (which I blogged about) and I had a hard time with it as well. The only way that I could even remotely enjoy it was if I pretended that the movie was about two other people named Tom and Jane, and not about Jane Austen. I share your outrage Myretta at the idea that Jane needed a man to “open” her up to new experiences so that she could write. I also thought Mr. Wisley was a wonderful suitor and thought the fictional Jane could have been quite happy with him. Of course we don’t how good he would have looked without his shirt on (*sigh*), the way we do James McAvoy, who was actually quite as Darcy lite.

I must be a bad Janeite, because I enjoyed the movie. I did watch it as a story that was for the most part unrelated to Austen. The casting of Anne Hathaway helped in this regard. Her acting was fine, she’s just too, well, healthy and tall everywhere.

I REALLY like James McAvoy. He’s also excellent in The Last King of Scotland.

I didn’t take the message to be that she “needed a man” to write, but that she needed to live a bit larger. The movie seemed aware that all of Austen’s novel pretty much end with marriage. The point was the insular nature of a woman’s world and her lack of choices.

I thought the movie did an excellent job of laying out how impossible writing books would have been if she HAD married, even Wisley. The conversation with Mrs. Radcliffe bore that out.

Anyway, I enjoyed it as a film.

I’m hoping to see it tomorrow! And I plan on pretending very hard that it is NOT about Jane Austen, just a light romance about some girl named Jane (and I like James McAvoy, too! I really think he was passed over for a Supporting Actor Oscar nom for Last King of Scotland). I hope it’s at least somewhat diverting, after a long week at work. Obviously, janegeorge, I am also a “bad Janeite,” as I have been told since I rather liked the Knightley P&P, so I have nothing to lose. :))

I guess that makes three of us who love James McAvoy! Yay! Amanda, I thought he deserved a nom for King of Scotland too.

Well, off to go English country dancing! (That is, after I eat totally authentic Regency-era guacamole.) 🙂

I’m with JaneGeorge, I enjoyed the movie. And I’m with Amanda, I liked the 2005 P&P a lot. I thought McAvoy was stellar as were a lot of the secondary characters. Hathaway wasn’t as bad as I’d feared she was going to be, which was a relief. Going into the movie, based on the premise and the trailers, I was aware that this is a fictionalized imagination of Jane’s life, not a docudrama. So I enjoyed the movie as such and was richly rewarded with lots of details I had previously only imagined (steel nigs, not withstanding).

I think I will withold comment until I’ve seen the movie, which should be soon. I don’t like historical inaccuracy in movies, as a rule, but it sounds to me like this story doesn’t really pretend to be more than fiction, loosely based on a few details from Jane Austen’s life. So I will have to see how it strikes me.

Of course, if I see it in a double-feature with Bourne Ultimatum I may be disappointed when Jane never leaps through a window in a hail of bullets…

Todd, a shotgun should give you a nice scatter pattern.

I love James McAvoy, too.
I will see this, eventually, treating it as Amanda does–as a nice piece of fiction involving Tom and Jane.

Well, except for the very rare movie (Star Wars, Star Trek mostly) I always have to wait until it comes out on video, but that aside, I’m not sure when I’ll catch it. . . (sure hope I’m not repeating myself here! LOL) because I’m just really hit and miss when it comes to things that are based somehow on real life. Sometimes I can lose myself in it, sometimes I can’t. P&P2005, couldn’t get into because of course, I was looking for the book. Moonraker, couldn’t get into because space shuttles can’t do what they made them do in that movie! LOL But sometimes I’m fine and love it. . . I.Q., I loved though that didn’t happen. Heck, I had to force myself after many tries to watch P&P1940 because of those outfits, but I ended uploved it (well, loved Lawrence Oliver’s Darcy LOL).

So, the moral to the story, one of these days I’ll get myself to watch it, just have no idea when. And hopefully I can learn to watch it without reading too much reality into it. LOL 🙂

Keira, I waited in vain for the immortal line: “My name is Austen. Jane Austen.”

Lois, you and Cara really should get together and have lunch some time. She loves IQ as well–when we were living in Princeton (a few years ago), she told me that she wanted a pair of white gloves like Meg Ryan wears in that movie. And she really likes Olivier’s Darcy as well! 🙂