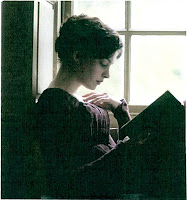 August always feels like the doldrums of the year to me. I wish I could be like the French, and spend the whole month at the beach or the mountains. The weather is hot (over 100 degrees for the past week, and likely to stay so for the rest of the month!), nothing much gets done at work and yet everyone is strangely cranky. Workplace Sweetie is gone for a couple of weeks. I’m having a hard time concentrating in reading or writing, or doing anything besides watching dumb summer TV and drinking gallons of iced tea. If it wasn’t for Anthony Bourdain’s hilarious stint guest-judging on Top Chef, I would have nothing. It’s a good thing I’m going on vacation next week, visiting Risky Diane and taking in the colonial fun of Williamsburg! Shopping for tricorne hats is just what I need to escape the August blahs.
Luckily, I haven’t spent all my time watching America’s Got Very Mediocre Talent! I got the Official word I’ll be doing 4 more books for Harlequin. You can look for Nicolai’s story (still with no Official title!) in April ’08. And you can see a review of A Notorious Woman here. And I got to see Becoming Jane this morning!

I went in telling myself sternly, “This is not a story about the author Jane Austen who lived from 1775 to 1817. It is just a Regency romance with a heroine named Jane.” And that seemed to help. The movie did seem to have many elements in common with some modern Regency-set romances. So–I didn’t hate it. Neither did I love it. It was quite silly in many ways, and what is worse, was sometimes quite boring. But I enjoyed some of the costumes; most of the acting (Anne Hathaway was better than I expected, though Anna Maxwell Martin, who was so good in the recent Bleak House, was mostly wasted as Cassandra); James McAvoy with his shirt off. And those boots he wore. I got to see a preview for Elizabeth: The Golden Age–Clive Owen, excellent choice to play Walter Raleigh. And the theater was air conditioned, and I got to eat a packet of Sour Patch Kids. Maybe silliness was what I needed today.

How do you pull yourself out of summer laziness? Any advice for me? And what’s your favorite movie snack? (Told you I was feeling silly today…)

Yay on Harlequin buying more of your books!

I saw Becoming Jane too, today. I think I liked it better than you, though I didn’t run out of the theater and phone all my friends to go see it.

I thought it was fun how the screenwriter had taken elements from all (or almost all — not sure about MP) of Austen’s books and put them in the script. 🙂

IMHO, the main flaw I saw was that it sort of jumped in the middle — they went from seeming to dislike and distrust each other to knowing the other one really wanted to marry them…which takes a little bit of dialogue, thank you very much! 🙂

But I really liked James McAvoy, and Maggie Smith, and Julie Walters, and James Cromwell… And I thought they did some things quite well. (Late at night, or I’d remember what they were.) 🙂

I wanted to see Becoming Jane….I’m STILL finishing this #@$&*% book

I wondered about that, too! Maybe he wrote messages in the margins of “Tom Jones” 🙂

My daughter liked seeing Professor McGonagall, Mrs. Weasley, Mr. Tumnus, and the “That’ll do Pig” farmer all in the same film. She wasn’t thrilled with the movie overall though, even at age eleven she wants her HEA.

I liked Becoming Jane pretty well…I understand what Myretta was ranting about, as far as some of the remarks about Jane equaling a “masculine author.” But it didn’t by any means ruin the movie for me. The steel-nibbed pens bothered me not at all, though I agree that even at a somewhat later time, when steel-nibbed pens were more common, it would be most unlikely for her to buy an expensive pen when quills were running around outside for free.

But for the most part, I found the movie very enjoyable, and much of it quite beautiful. I’ve liked Anne Hathaway in the past, so I wasn’t surprised that she did a good job. And James McAvoy was excellent. Maggie Smith was excellent, too, though I daresay she could have done that role in her sleep.

It’s a little weird seeing a movie about real historical people which is 95% fictional. But once one gets past that, I thought it was fun.

Congratulations on the new contract!!

My favorite movie snack is popcorn, but the advancing years/declining metabolism make that a no-go. Carrots. Carrots are a good choice.

And for me, I find a book I am really, really excited about to pull me out of the summer slump–right now I am reading a Lee Child, and I LOOOOOVVVVEEEEE him.

Amanda, congrats on the new contract!

I still haven’t seen Becoming Jane. It’s supposed to be at all theaters by now but quite often that doesn’t include my area.

Woo Hoo, Ammanda, on the new contract!! Lucky us readers!

Popcorn… Yum! If I go out to dinner first (gosh, can’t remember the last time we did that), I eat less and skip dessert, so I can have some popcorn.

Summer’s cold up here in the north. Temps in the 50s and 60s and cloud cover.

You know, all that protein and fiber???

Well, if you’re bored I could lend you my kids! On a more practical note, how about end of season shopping? I recently found a great blazer on a 70% off rack. 🙂

Congratulations Amanda on the new contract! I’m so happy for you. As for me, staying cool with some nice Passion Fruit Green Bubble Tea and sushi, plus a good book equals summer fun. I just finished Janet’s book, and it was fabu for the summer.

“As for me, staying cool with some nice Passion Fruit Green Bubble Tea and sushi, plus a good book equals summer fun.”

That sounds like the perfect summer meal. 🙂 I also love popcorn, but it doesn’t agree with me anymore. How do you eat the carrots in the movie without annoying your neighbors with the crunching, Megan? LOL! I stick with candy, which is probably far less good for me than the popcorn was.

Elena, I think your kids would be bored out of their minds at my house! Unless they like to read. I have plenty of reading material. Or maybe they’d go see Disney Princesses on Ice with me…

That would definitely be a movie worth seeing! 🙂

Oh, one other good thing about the movie is that I went with my cousin’s 15-year-old daughter, and it really opened her eyes to a lot of historical realities of women’s lives. Afterward, we had a long talk about all the must-marry-for-security stuff (plus the truth of JA’s life against the movie version), and she was appalled to realize that she would not have been a budding marine biologist at her age but husband-hunting.

Plus she borrowed some of my copies of Austen. Hope she likes them. 🙂

Oh yeah, love popcorn, though we never get it the rare times we go to the movie theater because it’s too pricey. LOL

First of all, huge congrats on the contract, Amanda.

Popcorn seems to be the snack of choice! I admit to scarfing down a bucket while watching a flick. Regarding “Jane”, I haven’t run out and seen it yet. The comments here are interesting . . . I think I’ll like the photography and costumes, and will be lukewarm about the storyline.

As for breaking the summer doldrums, a good book always transports me out of the heat, humidity and daily grind. It’s no wonder that all of us here treasure the magic of good writing. It really is even better than chocolate! (Though chocolate runs a close second.)

Okay, I thought of a couple more things I liked about the movie.

I liked the scenes that had lots of Jane’s family there. I think movies often get large families wrong, but I felt the dynamics there felt right.

I liked that the first stage coach was not a glass coach, but looked right (though I think the second one may have been a glass coach — too quick for me to be sure.) And the carriage that Maggie Smith was in near the end — was that a landau? In any case, I’m very glad the coaches weren’t limited to the typical glass coaches and faux-barouches (that ghastly thing you see in tourist areas, which is NOT a Regency carriage at all…)

Okay, yeah, my prejudices are showing. 🙂

And I’ve danced some of the dances they did, which is always fun.

Amanda, my kids love to read and they’d adore you if you took them to see princesses on ice. I’m buying airline tickets as we speak. 🙂

Seriously, congrats on the book contract!

And hurray because I have a sitter lined up and will see Becoming Jame today (with a bucketful of popcorn).

That would definitely be a movie worth seeing! 🙂

J: They warned me about you! They said you were mad, bad, and dangerous to know! But I didn’t listen. Oh, Lord Byron…

B: Call me George Gordon.

J: …whatever, let’s fly away from here! To a tiny cottage in the country where we can be together!