Huge Announcement: Pomroy’s Story (What I affectionately call the book, because my editor and I –and my best title supplier, Julie Halperson–have been unable to come up with a title) is done!

Some Titles that have been in consideration:

The Scandal Season
An Illicit Liaison (guaranteed to be misspelled)
A Proper Scandal
One Notorious Night
An Innocent Scandal
The Notorious Lady W (akin to The Mysterious Miss M!!)
A Wanton Woman

I’m not going to say too much about this story yet. Too much of it is tied to the next book, The Vanishing Viscountess (Hmmm. New title idea: The Licentious Lady….) , but I know my title examples will have you guessing!

I finished the book at about 6:00 am this morning, which is why my blog is coming in a little late and why my title ideas are deteriorating. It was due July 31 and I hate to be late. 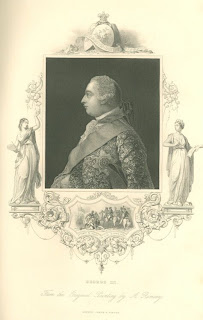 The harder I chased the deadline, the worse it got. With about one week to go to my deadline, I discovered that I had set the end of the book to take place during the Season of 1820 (Hence the title idea The Scandal Season). One problem. Not only did Prince Edward Augustus, the father of Queen Victoria, die that January, but a few days later, the mad king himself, George III, died, and the Prince Regent was very ill. My characters were supposed to enter a lively social season that spring? I didn’t think so. I went back to the beginning of the book and rearranged things to fit a new time frame. 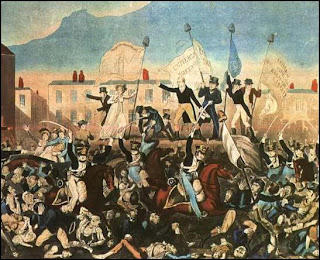 Luckily (although not lucky for the poor victims), the Peterloo Massacre happened the previous August, making that autumn an important time for Parliament. The Peterloo Massacre was an event that took place in Manchester, August 1819. A crowd of people gathered in St. Peter’s Field to listen to the great orator, Henry Hunt, speak against the Corn Laws and other social issues. The city officials became worried about the huge numbers and called in the Cavalry, who (drunk, they say) rode through the crowd swinging their sabres. Eleven were killed and hundreds wounded. That autumn, in fear that there would be other such protest demonstrations, Parliament passed laws restricting public gatherings and suppressing radical newspapers.

I figured London that autumn would be pretty busy, making it what Heyer called “The Little Season.” It would be credible that my characters interacted socially in this Little Season.

It was now September, 1819, in the book. I decided to send my characters to the theatre, although I did not know if the London theatres were dark or not in September. An internet search found a citation that a Mr. Webb performed at King’s Theatre within days of the day I needed. That was all I needed. I wrote the scene, pulling out the research books I’d purchased when I wrote Innocence and Impropriety, which featured King’s Theatre and gave more authentic detail. 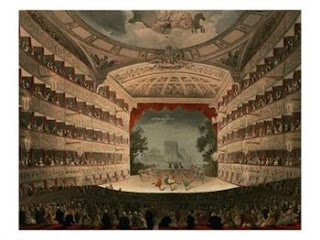 Something nagged at me, though. King’s Theatre did opera and Mr. Webb was an Irish humorist and vocalist. I did more digging and discovered that Mr. Webb had performed in the King’s Theatre in Richmond, a few miles outside London.

I had to rewrite the scene. I’d spent a whole day researching and writing the original scene. Sigh!

These are just a few examples of the bumps in the road that made writing this book more…ah…turbulent than I would have desired. From now on, I vow I will manage my time more efficiently and meet my deadlines with enough time to spare for reading over the book and polishing it to a fine shine.

I’ll let you all hold me to my vow.

What research roadblocks have you discovered in trying to finish your books? Surely I am not the only one….

I realize you have no idea what the book is about, but do you have any title ideas?

Next Monday! A report of my Williamsburg, VA/Jamestown vacation with Amanda, with special appearances by fellow Harlequin Historical authors, Deb Marlowe and Michelle Willingham.

One of the set-backs during the writing of this book was all the work that went into my new website. Please take a look and tell me it was worth it!

As for titles, actually, I really like THE SCANDAL SEASON. Some of the others in the list are titles one feel one has seen many times before (and one may have!) Though I also like THE NOTORIOUS LADY W…

Congratulations on finishing your story!!!

I also hope you and Amanda have alot of fun on your Williamsburg, Jamestown VA, vacation!

I agree with Cara on the titles. I also like The Scandal Season, and The Notorious Lady W. Oh, and Pomroy’s Story too. 🙂

I also vote for 1) The Scandal Season and 2) The Notorious Lady W. 🙂

Yay for Diane!!! I’m setting off some leftover New Year’s noisemakers for you!

A big clap on the back! Whew! What’re you gonna do to celebrate?

As for titles, the two the others mentioned are okay.
You could move around THE SCANDAL SEASON to be A SEASON FOR SCANDAL.

Have fun in Williamsburg. I’ve always wanted to go, but at Christmas. *G*

Good for you!! It isn’t too horribly late, especially when you consider what else you were involved with, what with the Dallas conference and all.

I rather like An Innocent Scandal; such a delicious paradox. It also ties it back to Innocence and Impropriety, which is where Pomroy is first hinted at.

As far as the research goes, thank goodness for the internet, and yet I worry I’ll miss something obvious (which is all too likely). I had to do some serious fiddling when I discovered that 1816 was a Leap Year, with Leap Day following Ash Wednesday.

Did you know that The Vanishing Viscountess is available for pre-order at Amazon? 🙂

The Scandal Season is a great title–one of Julie’s. Of course, the hero and heroine are never together in a real London Season…

I am soooo sleepy!

The Scandal Season sounds like the one you’re leaning toward. Do you make the final decision or does someone else?

Congrats! I like “The Scandal Season”, “An Illicit Liaison”, and “The Notorious Lady W”. Research problems causing rewrites seems inevitable. In “Dark Angel”, an historical I wrote with my mom as Anna Grant, we had to totally rework a sequence aboard a British naval ship (going from Lisbon to England) when we actually researched ships and realized there was *no way* the hero and heroine would have the privacy for a love scene…

I am so happy for you! This is fabulous news! I’d help you pick a title but I’m not very good at it, so I’ll trust your instincts…when you’ve had some sleep!!

Judy T, the author generally doesn’t have final say on the title, but we do get to suggest.
And I didn’t know The Vanishing Viscountess is on Amazon for pre-order!

Mallory, Santa, and Janegeorge, it is just so nice that you stop by and comment and wish me well.

I like The Scandal Season, too, except it no longer fits. Wah!!!!

Tracy, don’t you just hate it when you find these historical things AFTER you wrote the scene???

On the topic of research, I totally sympathize! I blogged a while back on the research monster my current wip has become. Why can’t I stick to what I know just once????!!!!

On titles, I like The Notorious Lady W best, but I’m sure your editor will have ideas. For now, get some sleep and then celebrate!

I think I like — A Proper Scandal
and An Innocent Scandal myself. . .

And so that’s what the ever famous boxes look like!!!! I’ve always wondered, everytime I read a book where they go to the theater or the opera or something, they always have boxes, but it just never clicked on what they looked like. Okay, okay, I probably should have had a clue being a fan of Phantom, but still, I’m clueless and they didn’t look like that, not that many. Thank you for that pic!! 🙂

Many congratulations, Diane! And after so many setbacks and vicissitudes. I’m always impressed that you authors finish books at all, let alone make them so good! 🙂

It’s a bit of a handicap, picking a title without knowing what the book is about. 🙂 The Scandal Season is good, as several have pointed out. And I like An Illicit Liaison, too, in spite of the spelling hazard.

But perhaps you’d like to consider a few of these titles, which I present for your delectation:

The Scandal Seasoning (It is a scandal what saffron costs.)

And the pièce de résistance:

Peterloo, and Pomroy, Too!

Todd!
Thank you so much for the title suggestions. You’ve nailed it with Peterloo and Pomroy, too. Can hardly wait to see that on the book cover!

(and thank you for the laugh!)

Lois, before I found this image I agonized about boxes too

Hooray on finishing! It was great to see both of you. 🙂