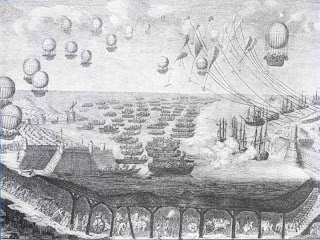 Janet reminded me that it was Napoleon’s birthday today. My first reaction was not to blog about Napoleon because I didn’t have time for research not related to mess-in-progress and most of what I know about him comes from my reading about the English. The ones who called him the Corsican monster and lived with a not unfounded fear of invasion (despite the cartoon at left depicting an imaginary balloon-and-Chunnel attack).
My one more objective source on Napoleon is The Age of Napoleon, by J. Christopher Herold. It’s a good higher level history of the period, yet I still don’t see much to admire in Napoleon himself. There’s a line in the concluding chapter: “his historical role was that of an unconscious tool of destruction, clearing the way for a modern age that little resembled the age he thought he was creating”. I suspect Herold meant clearing the way politically but my first reaction was: Were there just too many able-bodied young men in England and Europe standing in the way of progress? When I think about the mothers, wives, sisters and sweethearts who lost their loved ones I just can’t see any glory in it. 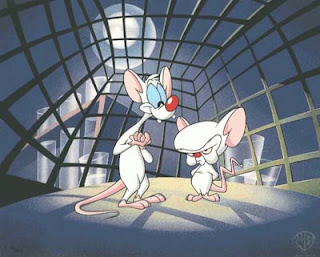 I used to not get the whole world domination thing. Too Pinky and the Brain for me. More recently I’ve thought about it in light of controlling people I know and I’ve realized the impulse comes from fear. People who need to dominate every situation are afraid that if they’re not on top A) everyone will attack them and/or B) that nothing can get done right. It’s pretty delusional and again I see no glory in it.
So what do you think? Anything to say in Boney’s defense? Do you find villains intent on domination of some world, greater or lesser, over the top or believable? 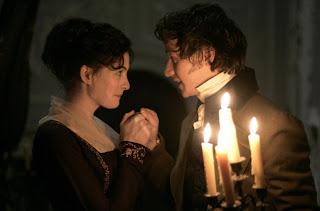 And in case the subject of Napoleon doesn’t fire you up, I have to mention that I just saw Becoming Jane and (don’t eat me!) enjoyed it. Of course I did not take it as serious biography but thought it worked well as a story in itself.

It occurred to me that if one set out to make a movie of Jane’s life, the known facts add up to an interesting but not a dramatic story. There’s much we don’t know. Cassandra destroyed a portion of her letters and I can’t help suspecting they held more insights into Jane’s inner life than we will ever have. I’m not saying that the events depicted in the movie really could have happened, only that I can understand why the creators of Becoming Jane chose to embroider in the gray areas. If the result will cause some of those teenaged girls I saw in the theatre to go out and read even one of her books, that can’t be a bad thing.

So my apologies for this long post and I look forward to hearing what you all think!

I don’t exactly like Napoleon, but I do find him fascinating. His restless intelligence and ambition leap off the pages of history, the military historian in me admires his talents, and he obviously had the charisma to pull any number of great men in his wake. France was ripe for takeover by a strongman when he came along, and they (and the world) could’ve done a lot worse. I don’t think he was evil–I tend to get huffy on his behalf whenever I see him compared to Hitler–just overwhelmingly ambitious.

I often wonder what would’ve become of him if he’d come of age in a stable system where taking absolute power and going on a rampage of conquest weren’t options. Maybe I’m wrong, maybe I’m crazy, but I can imagine someone with his talents and personality making a brilliant American president or British prime minister if that was the summit of power available to him.

Susan, I understand your point about Napoleon being less purely evil as Hitler. The Age of Napoleon describes his idea of government and as I recall it wasn’t totally awful. But–and this may be my lack of specific study of Napoleon–I have not read that he ever wept over the lives wasted during the wars that bear his name. I am uneasy at the thought of anyone so single-mindedly ambitious in charge of anything.

Napoleon’s armies were certainly very hard on the civilians in the areas they conquered — though I don’t know how much of that is directly attributable to Napoleon.

I think humans do have a drive to win, to conquer, to be the top dog — perhaps folks like Napoleon just have that part of the brain too big or something. 🙂

But–and this may be my lack of specific study of Napoleon–I have not read that he ever wept over the lives wasted during the wars that bear his name.

Neither have I, and I’ve recently begun studying him as part of the research for my WIP. Of course, sad as it is to say, he was hardly the first or the last general or political leader to lack that sort of compassion. And, really, I *don’t* like him. I just think he gets a bit over-demonized because we, naturally enough, tend to view his wars from the English POV.

People can be strange. Wellington was on several occasions visibly and publicly moved by the consequences of battle–but some of his comments about the Irish, ordinary soldiers/”the lower orders” make me want to go back in time and wring his neck. (But I do like Wellington. I would wring his neck friendly-like, just to convince him of the error of his ways.)

I meant to include an “etc.” here. I blame sleep deprivation.

I admire Napoleon’s abilities. And some of the reforms he made were admirable, though I think they have less to do with his personal convictions than with the fact that he was clawing his way to the top in the aftermath of a Revolution. And I don’t admire many of the regimes that opposed him–many of them autocratic, some downright medieval, all of them systems rooted in inherited privilege. The fact that some of those regimes were served by men of superior ability and rectitude–and I count Wellington in that list, BTW–does not excuse their faults.

But I can’t admire Napoleon himself, or what he did to France and to Europe. His actions were driven by personal ambition, and forwarded by a ruthlessness that counted it nothing but good strategy to sweep up two generations of French youth into an army that chewed them up and spit them out. He propped up his empire by the systematic looting of other countries, at a tremendous cost in lives and destruction. And the same ambition that brought him to his peak defeated him in the end. If he’d been willing to stop at the height of his power, he could have kept most of what he conquered; but if he’d been willing to do that, he wouldn’t have been Napoleon.

I read a short biography of Napoleon years ago, that contained a quote that I thought summed him up perfectly. Unfortunately, I don’t remember the original source of the quote, or the exact words, but the gist of it was this: “Over the years, many madmen have thought they were Napoleon. The difference with Napoleon is that he actually was.”

Most of the time I’m wondering what books to get first but lately I’m wondering if I should go to the movies what with Becoming Jane and Stardust. Hmmm…..

I absolutely agree about Fear, deep-seated, even unconscious fear, being the root cause here. But then, I see Fear as driving most corporations today and even capitalism itself, as in, there’s not enough pie to go around, so get your slice now! That, and fear of death being behind blind consumerism. Just look what fear’s done for the stock market lately. The stock market doesn’t function on objective rationality. But I digress, rough couple of weeks at the day job…

Oh, and I LOVED Stardust. It was such lighthearted fun. I came out of the theater truly happy. In case you Riskies think I like every movie I see, such is not the case. I loathed Evening. ;-j

I am with you, Jane, in thinking that fear is the driver behind extremist isms of any sort. The insidious thing is how these movements manage to glamorize themselves.