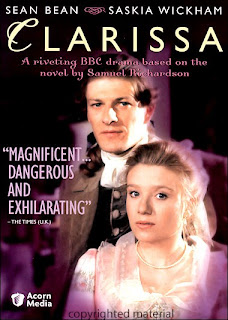 I will warn everyone in advance: I do not know where I am going with this post.

And then I will say: Cara, avert your eyes. I’m talking Richardson.

Awhile ago, I got a copy of the BBC production of Clarissa, starring Sean Bean and Saskia Wickham.

When I was a teenager, I read and re-read Samuel Richardson‘s Clarissa; it is a tortured, compelling story of an honorable woman stuck between a rock (her family’s insistence she marry an awful man) and a hard place (Lovelace, a rake who falls violently in love with her). Honestly, I love this story. Each time I read it, I hoped Lovelace would reform earlier, or Clarissa’s family would relent, and each time I cried at the end.

I started watching the other day (my reward while ironing a random dozen of my husband’s shirts), and the televised version puts in an uncomfortable plot point: Clarissa’s sister and brother are dabbling in incest.

I was miffed that they would choose to make that a plot point because the book makes it clear why her siblings are being so terrible to her, but then I thought again that it might’ve happened more often back then.

Think about it: After a certain age, the sons were sent off to school while the daughters remained safely at home. They were separated so they didn’t have that sibling contempt (as in ‘familiarity breeds . . . ‘), but when they were together, they lived in the same house, so they had access to people of the opposite sex. And being teenagers, they probably were interested in sexual experimentation, and found the easiest solution: Their siblings.

We’ve all read with horror–and some salacious interest–of Byron’s suspected affair with his half-sister, Augusta Leigh. They were raised separately, and began keeping company again when they were adults. 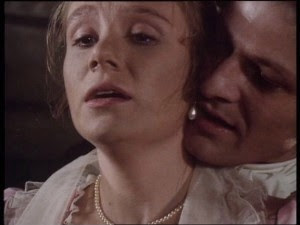 But back to Clarissa. One thing that made the book so compelling for me is that although Clarissa is a virtuous girl, she is indeed intrigued by Lovelace; certainly, he is far more appealing than the suitor her family has chosen, whom Lovelace warns her will be the cause of her early death. And who wouldn’t be fascinated by him? He has a shocking reputation as a rake, he is handsome, charming, and persuasive (that he is played by Sean Bean in the miniseries certainly does no damage in my eyes, either).

But since she is so pure of heart, and of motive, she decides against Lovelace, but circumstances ultimately force her to him. Which, in turn, forces her to her eventual demise.

If Clarissa were a romance novel, she would have reformed her rake early enough to achieve her happy ending. But Richardson wasn’t writing romance, he was writing virtue, so while Lovelace and Clarissa’s siblings get what they deserve, Clarissa herself does not.

I don’t think I would actually like Clarissa if I met her, whereas I would definitely have a great time with Jane Eyre or Elizabeth Bennet.

Let’s see: I’ve brought up incest, sexual taboos, great (or not) works of literature, non-romance novels, unhappy endings, just rewards, and which heroine you’d get along with. Pick any or all and discuss, if you like. Thanks for following along with my train of thought, which has gotten very, very derailed.

Megan
To sign up for our newsletter, send an email to riskies@yahoo.com.

FWIW, I was interested to learn that studies have showed the incest taboo is apparently not just societal, but (at least somewhat) biological. Apparently, if a boy and a girl live in the same household before the age of three, they’re much less attracted to each other. Which might imply that Clarissa’s siblings are not hugely likely to go for each other (though your other points, such as lack of access to anyone else, may outweigh that!)

Anyway…I decided not to avert my eyes from The Richardson Talk after all, because the more I learn about Clarissa, the more I can pretend I *have* read it, and therefore won’t ever have to actually do so! :-p

I remember watching this back when it was first on Masterpiece Theater and being horribly annoyed with Clarissa for turning down Sean Bean. And then dying after giving in. I thought Virtue, smirtue, who cares? It’s Sean Bean! I don’t remember the incest part, but Phillipa Gregory in her book Wideacre has her character Beatrice seduce her brother as a way of controlling him, and through him the family estate Wideacre which she is obssessed with.

(That’s all I’ve got. It’s Friday. I can be shallow over Sean Bean.)

Cara, I haven’t read Richardson either, though I did see this adaptation. I liked it (among other things it has Sean Bean :-). Definitely the dark side of a common romance plot. Interesting comments on brother-sister incest. There’s also the fact that the boys were sent away to school quite young which might have made it easierr for brothers and sisters not to see eac other as siblings. And (though it wouldn’t apply to Clarissa’s brother and sister) given the love affairs and children not biologically fathered by their supposed fathers among a certain set of eighteenth century aristocrats, it’s entirely likely that some brothers and sisters fell in love not knowing they were brother and sister.

Who knew that a post about Clarissa Explains it All?

“Apparently, if a boy and a girl live in the same household before the age of three, they’re much less attracted to each other.” – Well, of course! They’re under the age of 3, for heaven’s sake! Who’s attracted to anyone at that age? Man, they’re giving grants for the strangest studies nowadays.

LOL, Rob! Leave it to you to set me straight. 🙂

They’re under the age of 3, for heaven’s sake! Who’s attracted to anyone at that age?

Haven’t you ever read Annabel Lee? But then, Poe was pretty warped…

I haven’t read the book, but I did see the mini-series with Sean Bean. I found it very disturbing for a number of reasons. It was years ago that I saw it so I say this with the impatience of youth and not the greatest of memory, but I was very angry with Clarissa that she would just will herself to death. Yes, Lovelace was absolutely horrid to her, but I was very frustrated that she just seemed to let him get away with it.
I was also most upset that Lovelace never did seem to be at all repentant at how he had destroyed her life.
Plus that was my first exposure to the loveliness that is Sean Bean and I was kind of upset that such a magnetic kind of person could be so truly evil.

She is so ‘good’ she cannot ever love truly – nobody comes up to her standard.

She is also totally asexual – and cold and far too analytical.

Lovelace is far more of a tragic figure than she is.

What a pity he didn’t meet Moll Flanders or Sophie Western!