The term “beach reads” is a bit of a misnomer as torrential rain early in the week and then record-high temperatures later in the week limited beach activities during my vacation last week. And if anyone thinks rain means more time indoors and more time to read hasn’t been on vacation with 3 kids between the ages of 4 and 11. To avoid too much cabin fever at the cottage we made excursions to local caverns and children’s museums instead–fun places but not conducive to reading. 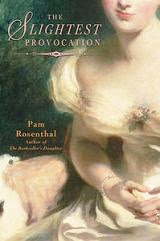 So I read only about half as much as last year but thoroughly enjoyed what I did get to. I am desperately trying to catch up with my fellow Riskies’ new releases. Though I couldn’t get a copy of Amanda’s A Notorious Woman (had to order it) I did bring along Janet’s The Rules of Gentility. A delightful spoof of a Regency (IMHO the best spoofs also show love for the subject) and had me laughing out loud a number of times. I couldn’t explain it all to my children, of course, but now they want to read it when they’re old enough. đź™‚

Next I picked up Pam Rosenthal’s The Slightest Provocation. I’m not surprised it finaled in the RITAs. The characterizations are deep and true, the sex is earthy and more real for not being perfect. Sorry, Pam, I know I’m not doing the book justice here but my brain is too fried to come up with better descriptions. Anyway, I recommend this to anyone who hasn’t read it yet.

On the last day I picked up Loretta Chase’s lastest release, NOT QUITE A LADY. In the flurry of unpacking and such I still haven’t finished it but so far it’s got the classic Chase mix of angst and humor. I can’t wait for things to settle down so I can enjoy finishing it!

As to other vacation activities, I can’t resist talking about roller coasters. Tuesday we had the perfect day to visit Cedar Point: overcast and late in the season, lines were short to nonexistant. It was great fun riding the coasters I rode as a teenager–the Blue Streak, the Wildcat, the Gemini–and taking my kids on them for the first time. Because we had to deal with a lot of different ages in our party I wasn’t able to try some of the new, scarier coasters–like the Top Thrill Dragster, pictured right. I’m told the G forces are amazing. Maybe next year. Maybe.

Bringing this post back to relevance, I couldn’t resist checking out the history of roller coasters. I was delighted to learn that there even were two roller coasters built in France in 1817: the Les Montagues Russes a Belleville (the Russian Mountains of Belleville) and Promenades Aeriennes (The Aerial Walk). You can read more about them at www.ultimaterollercoaster.com. 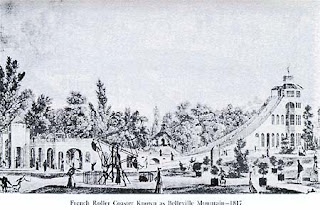 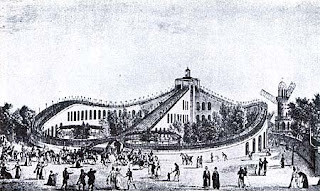 I suspect it would not have been considered ladylike (particularly for an English heroine) to ride one of these French coasters but wouldn’t it be fun to work it into a story?

So before it’s completely over, what were your best reads and rides of the summer?