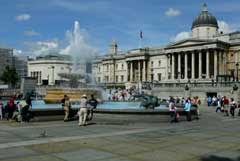 Ah, lovely Trafalgar Square. When I first lived in England, you had to cross an extremely busy street to get from the main part of the square to the National Gallery. Today, that street is a pedestrian-only zone.

Now that I have pointed out that I am able to see that some changes are good, let me just say that, in general, change disturbs me. Not on an intellectual level, but on an emotional level.

When I go to London with Todd, there’s quite a bit of “Oh, that’s where that great Vietnamese Restaurant used to be” — “oh, and here’s where the Dillons used to be that got the windows broken in that football riot” — “oh no, that cool little shop in the tube station where I could always find a Diet Tango is gone” — “you’re kidding, they moved the Tourist Information AGAIN?” 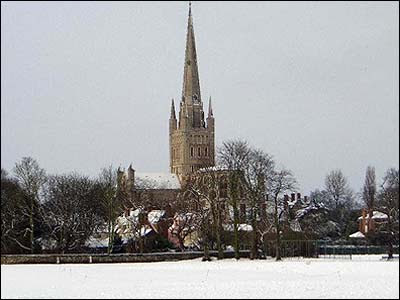 And then we go to Norwich, where’s there’s now a MALL on Castle Hill, and the library’s in a gigantic glass building which also has a museum and a Pizza Express.

Okay, yes, these aren’t all bad changes. The old Norwich library (which burned down) was one of those ugly 1960’s type buildings — no great loss.

But part of me wants the world to stay the same. Seeing bits disappear when I’m not looking is like glancing down at my feet to find part of the floor has disappeared.

Which has me thinking.

The Regency was a time of great change, in so many areas. Stunning, staggering change. 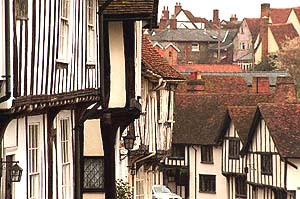 How must Regency folk have felt about this? Because, however they felt, they surely noticed it. Did they hate it? Love it? Vary in opinion?

What do you think? Did London folk get upset when buildings were knocked down and streets torn up to make Regent Street and Regent Park? Did older folks complain that fast roads were ruining both the countryside and young men’s morals?

And do you get bothered when things change?

Cara
Cara King, author of MY LADY GAMESTER and mourner of the tastiest Vietnamese restaurant in London

Elena Greene grew up reading anything she could lay her hands on, including her mother's Georgette Heyer novels. She also enjoyed writing but decided to pursue a more practical career in software engineering. Fate intervened when she was sent on a three year international assignment to England, where she was inspired to start writing romances set in the Regency. Her books have won the National Readers' Choice Award, the Desert Rose Golden Quill and the Colorado Romance Writers' Award of Excellence. Her Super Regency, LADY DEARING'S MASQUERADE, won RT Book Club's award for Best Regency Romance of 2005 and made the Kindle Top 100 list in 2011. When not writing, Elena enjoys swimming, cooking, meditation, playing the piano, volunteer work and craft projects. She lives in upstate New York with her two daughters and more yarn, wire and beads than she would like to admit.
View all posts by Elena Greene →
This entry was posted in Uncategorized and tagged Uncategorized. Bookmark the permalink.
0 0 votes
Article Rating
Subscribe
Login

I don’t mind a bit of change, though it does bother me when they tear something down that I’ve known forever or was a “fixture” in a certain area. It’s kind of sad to see something I consider “historic” be torn down. *sigh*

Cara, I so understand where you’re coming from. I almost died when I saw a Starbucks in Heathrow Airport when I went back to London for the first time in years. And also when Spud-u-like disappeared near the Notting Hill tube station (we used to eat there all the time in college). However, I do love what they’ve done with Trafalgar Square and Covent Garden.

It took me a few days upon first visiting London to understand what a wonderfully unsentimental city it is, building and rebuilding itself in layers. And always has been, I think. I try to use the building of Regent Street in my writing — the displacements of families and such — along with the Enclosure Acts — hmmm, displacement of families and such.

I don’t mind it when they change things that I hate, but otherwise I’m against it. đź™‚ OK, maybe not quite. I like it when they add really cool things. I like the footbridge across the Thames. I’m glad they put in trains at some point, so we don’t have to go everywhere by stagecoach. And I will go on the record: if they decide to tear down Centre Point, I’m all for it. It’s amazingly ugly.

So, OK, I guess I do like change, at least in moderation. But I don’t like it when things I love are ruined or eliminated.

I tend to be attached to things the way they are–favorite restaurants, shops, buildings. New things can be fun, but I’m always sad to see favorites go away. Very good point about the changes to Regency London. Major difficulties like displaced families, but also just the disruption caused by major construction, changes to traffic patterns. etc… Need to make a note to do more with that in future books…

I think more people dislike change than the other way around. I know I’m getting old when I see buildings being torn down that I saw built – and not that long ago. So many things aren’t here to stay any more. Wouldn’t it be horrible if there were no castles left to see.

We’re just glad to have you here, catslady! đź™‚

“I tend to be attached to things the way they are–favorite restaurants, shops, buildings.”

Me, too! Not long ago they tore down a 24-hour coffee shop that I used to go study in when I was in college. So sad! Starbucks just doesn’t let you hang out for hours like that old place did…

When change is good, it’s called an Improvement, right? But then again, didn’t some Regency folks see Improvements as abominations? It’d be fun to know what the Regency equivalent to indignation over another Starbucks would be. “Oh, not yet another Grecian folly!” Just kidding.

I don’t fight change too much, but I do wish that infamous signed and graffiti-ed wall at CBGB’s in New York would have been put in the rock and roll museum when torn down. A slice of an era, that was.

It’d be fun to know what the Regency equivalent to indignation over another Starbucks would be. “Oh, not yet another Grecian folly!” Just kidding.

But we do see this kind of thing, or we can. Richard Owen Cambridge (poet and satirical author) said something about wanting to die before Capability Brown so that he could “see heaven before it was ‘improved'”. And I’ve read quite a few quips about various architects of the age (not everyone liked the Adams).

Most people living in towns with a significant history attached to it get upset when anything changes: tearing down buildings, “different” people moving in, change in crowdsI/traffic, and on and on. I get attached to places I like, and they live on unchanged in my memories, so I’m always shocked when I return to the remembered place and it’s changed completely.

Then again, sometimes, my head tends to be buried in the misty clouds of historical facts. Just ask my brother about our trip to Northern England, where I was trying to navigate with a medieval map and being astonished because places were called different things or had simply vanished.

Starbucks has now become the new McDonalds, the company everyone loves to hate. I like the comfort of knowing that no matter where I go, I can have a cup of coffee or a chicken sandwich and have it taste approx the same–the comforts of the familiar.

I’m with Todd..well, figuratively, that is. I don’t mind when they change things I don’t like.

I used to be in the business of helping people change and it was always ironic that privately I used to joke, “Change is bad!”

Change is good if it makes something better!

Oh, I imagine they hated change just as much as we do. LOL But history-wise, so much stuff started to change so quickly in the 1800s only to explode in the 1900s that it was probably tough.

I just hope my favorite bookstores will always stay there where they are. đź™‚ Well, as long as I’m here. We’re moving someplace in the near future (where, who knows) so after that they can go away. đź™‚

The Rings of Time

Cara: Want to really escape and have a few things explained that were till now inexplicable – like deju vu and clarvoyance? Read a good sci fi story..when you have time, check out my blog:

and let me know what you thinkâ€¦.thanks!