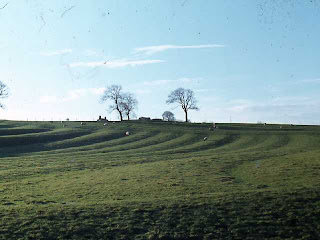 Sorry this is such a late blog.

What was enclosure and why was it such a big issue in the Regency? Cara’s post on the changing face of London reminded me of the great changes that took place in agriculture in our period.

If you’ve ever taken a train ride in England you may have noticed gentle swells in the land, the rig and furrows of medieval farming. (They’re easier to spot from trains than roads, I find, because you’re higher.) Generally they’re visible on pasture land, because modern ploughing will destroy them, although they could be up to three feet high. Crops grew on the rig (ridge) and the furrow provided drainage. Each rig represented one day of ploughing. Typically the land consisted of these cultivated strips, and the unplanted areas, although technically belonging to the lord or landowner, were designated common land, for the use of tenants and workers. There’s only place left in England that still has the Open Field system, the village of Laxton in Nottinghamshire, I found a picture of the Laxton fields, but it doesn’t really look like much–flat land, no hedges–more like a prairie.

The first great wave of enclosures came in the sixteenth and seventeenth centuries, when land was enclosed for grazing as the wool industry grew. By the Regency period, it was again big business and enclosure had a profound impact on country life. The common land was a source of fuel, grazing and foraging for animals, and even food for farmworkers. They eked out their wages, and the equally small wages women made from traditional cottage industries such as hand spinning, button- or lacemaking, and straw plaiting (for hats), with the resources of the common land. Once the land was enclosed, they lost their livelihood.

So began the migration of displaced countrydwellers to the cities, and it also explains why the servant population became dominated by women in this time period.

My question (grasping wildly at straws)–what books have you read that capture the feel of the English countryside? I recommend Lark Rise to Candleford by Flora Thompson, which is about country life in 1880s Oxfordshire. She mentions the old people of her village who remembered the land before enclosure.

Janet, I have absolutely nothing to say on this, except that I’ve read a little on what happened in Scotland.

It is a profound change, isn’t it?

Gosh, Janet. i had not thought about this at all. All the books I’ve read and research I’ve done has been about titled lords owning entailed farmlands. So there’s susbsistence farming with everyone living in situ. Domestic help seems to come in from the “village” that’s attached to the estate. Was there resentment from the villagers towards the tenant farmers? No clue. How did the estate make money from the tenant farmers? Again that whole relationship isn’t explored.

The Highland clearances were for different reasons other than grazing land for sheep. It was mainly to eradicate the ties to the land, culture, language, etc. Even just thinking about it causes the bile to rise up in my throat.

If this extends to regency romances, I think that Carla Kelly captured the feel of the countryside and a working farm in The Lady’s Companion. The hero was a bailiff.

When I wrote about enclosures in Almost a Gentleman, of course I made my good landowner an enemy of all such things. As though it would have been so easy.

My beloved reading group, the Unreadables, is doing a little Blake these days (my choice) — and Blake of course know perfectly well about enclosures. I didn’t know the poem “Jerusalem” before now, though my fellow Unreadables tell me it’s been adopted as a Church of England hymn — how very strange, Blake must be plotzing in his grave.

Anyway, I kept hearing the last verse as I read your post.

I will not cease from mental fight,
Nor shall my sword sleep in my hand,
Till we have built Jerusalem
In England’s green and pleasant land.