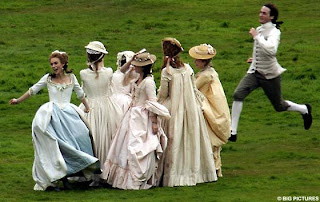 BTW, I’m starting this post with something totally unrelated to my topic, but I wanted to share this pic! I found it on a film costuming blog I sometimes visit, and it’s the first glimpse of the Keira Knightley film The Duchess! Even though I wish they had cast someone else as Georgiana, I’m always excited about a chance to look at 18th century costumes.

And now for my regularly scheduled post! A few weeks ago I read a fun book by Maureen B. Adams, Shaggy Muses: The Dogs Who Inspired Elizabeth Barrett Browning, Emily Bronte, Emily Dickinson, Edith Wharton, and Virginia Woolfe. While not exactly deep. ground-breaking scholarship, I loved the way it illuminated this aspect of the writers’ lives, their very different relationships to their pets, and how their dogs provided not just companionship and distraction, but grounding during times of intense creativity and psychological upheaval. 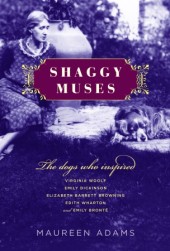 Elizabeth Barrett Browning’s spaniel Flush seemed to be a sort of conduit for her own emotions when she was confined to home as an “invalid”; in letters she often ascribed her own feelings to Flush, and thus made them safe to express. But he also made her feel more empowered when he was kidnapped by a band of evil dognappers and she went out herself and got him back! (I HATED those dognappers). Luckily for Flush, he got to end his life in Italy, running around the piazza with all the wild Italian dogs.

Emily Bronte’s mastiff, Keeper, was weird dog for a fascinatingly weird person. He was enormous and often bad-tempered, fighting with the village dogs and such. But he wandered the moors with Emily at all hours, and was sweet as a kitten when she subdued him by beating him up when he got on the parsonage furniture. (Her sister Anne had a small spaniel, Flossy, who it seems was allowed to get on the furniture with impunity…) Keeper stayed close to Emily as she was dying, followed her funeral cortege to the church, and then spent the rest of his life lying outside her empty bedroom door.

Emily Dickinson also possessed a very large dog (“as big as myself,” she wrote in a letter), a Newfoundland named Carlo that her father bought her for protection. He was too gentle for that, but he proved an excellent, laid-back, affectionate companion for the Very Intense poet. In my Google searches, I found that the Emily Dickinson House in Amherst even has Carlo Look-Alike Contests once a year!

Edith Wharton, on the other hand, had a pack of very tiny dogs, Papillons and Chihuhuas and Pekinese. Link was the last one, and he often sent invitations and letters in his own name to Edith’s friends and guests. They traveled everywhere with her, a little, dancing, yapping pack.

Virginia Woolfe’s attitude toward dogs seems to have been more prosaic than Wharton’s! They weren’t like her “babies,” they often ran off or got into trouble, but they were still an important part of her life. Most of them seem to have been large hounds or mutts, but there was one expensive spaniel, a gift of her lover Vita Sackville-West. Woolfe even wrote Flush: A Biography about Barrett Browning’s dog!

So, if you love pets and poetry as I do, this is a fun book! I showed some of the illustrations to my own dogs (Victoria the Pug, and Abigail the poodle) and they enjoyed it immensely. Though they now want to travel all over Europe with me, as Wharton’s dogs did. đź™‚ I suppose I can’t say my dogs are my “muses”–I’ve never written a story about a bluestocking poodle falling in love with a French poodle comte, for instance. But they ARE a huge comfort when I’m blocked in a story and feel like I Will Never Write Again, or when I’ve gotten a bad review and am feeling down. They sit on my lap and give me kisses, assuring me that they love me and think I am a great writer and fabulous mommy no matter what that nasty reviewer says. I couldn’t do without them.

Do you have your own pets? Or know any good Pets In History stories (I always love those!)?

Happy Saturday! Take your dogs for a nice long walk (maybe not your cats, though–my cats would never let me put a leash on them, but they are excellent companions and comforts, too)