Janet: Jane, welcome to the Riskies. I feel as though I know you already! Tell us about the book.

Jane: Forbidden Shores is about three people who each fall in love with the one person of the three who cannot love them back. I think I tend to see love as a catalyst, a powerful force that can be destructive as well as healing. Generally everything I write starts off with people who are quite happy as they are until they fall in love. Then they kick and scream as everything changes. It’s set against the background of the abolitionist movement and takes place mostly on a Caribbean island; Clarissa, the heroine, actually quotes from The Tempest at one point, and Hero #2 (March) is the enigmatic, powerful ruler of the island, a sort of Prospero figure. And if you were really going to explore the analogy, Allen, Hero #1, is Caliban. (Oh, and by the way, it’s much more explicit than the cover or back cover blurb suggests.)

Janet: What was your inspiration? 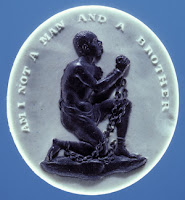 Jane: A brilliant book called Bury the Chains by Adam Hochschild about the British abolitionist movement. Abolition was a hot, polarizing issue in Georgian England and full of conflict and sacrifice and passion, and I knew I wanted to write about abolitionists after I read it. I originally intended to set the book in England but my editor thought Quakers collecting signatures for petitions in the rain not nearly as sexy as sex on the beach of a Caribbean island.

Janet: So you had to deal with the issue of slavery in the book.

Jane: It was very painful and difficult to write about. Slaves working on sugar plantations were treated inhumanly and shamefully. I certainly didn’t want to go into lurid details, but I didn’t want to tone it down, and neither did I want to idealize the slaves who appear as secondary characters.

Jane: After diligent research–[unseemly snorts of laughter]–I didn’t want to make it too slick and multi-earth-moving. It’s part crazy lust but it also represents the desperation of all three not getting what they really want and knowing that this is as close as they can get. So there’s a fair amount of clumsiness and reluctance, but the heroine, whose idea it is, has the best time (my editor’s suggestion).

Jane: I think you could have phrased that a little better. Really, finding other things for your characters to do; making them believable as people.

Janet: Is there any sort of sexual practice you’d feel uncomfortable writing about?

Jane: In this book, with its context, any sort of master/slave sex play. I guess I’m expected to say “no non-consensual sex” but I think once your characters are experimenting and exploring they may well do things they don’t want to do–or think they didn’t want to do.

Janet: Did you do any special research?

Jane: Not as much as I would have liked. For the sea voyage, I re-read a wonderful book by Eric Newby, The Last Grain Race, that gives an incredible portrait of life below decks on a sailing ship. Newby, who died last year, was the travel writer for the Observer in England, and in 1939 he sailed on a grain ship from Dublin to Australia on a ship that’s now a restaurant in Philadelphia, the Moshulu. I also re-read The Wide Sargasso Sea, a book I find unsatisfying because both voices are Jean Rhys’s (even though she has a wonderful voice). As well as some books on the history of the Caribbean, I found a couple of great websites: the Antigua & Barbuda Museum and Brycchan Carey’s Links and Web Resources for Slavery, Abolition and Emancipation. I visited Bristol, now my favorite English city, and its wonderful (free!) museums. And I borrowed the wording for a manumission from Olaudah Equiano’s Interesting Narrative.

Janet: What’s your favorite part of the book?

Jane: The chapter where Allen does his own laundry (a big no-no for a Georgian gentleman) and then climbs the mast of a ship (talk about phallic symbolism!).

This entry was posted in Uncategorized and tagged Abolitionists, Forbidden Shores, Jane Lockwood. Bookmark the permalink.

33 Responses to Conversation with Jane Lockwood