Thanks to Naomi for the idea for today’s post. She wrote to us:

I have been reading a fabulous book by Alison Light who wrote about Virginia Woolf and her complex relationship with her servants (Mrs Woolf and the Servants). Virginia Woolf in her fiction and diaries thought and fumed about her difficulties with servants. She couldn’t live with them and she couldn’t do her work without them. If we assume that our beloved ‘historical romance’ heroines are reflective of our own idea of desired qualities then often they are written as being firm but fair employers, efficient and amiable house managers, and who often have some retainer or ex-nanny who is fiercely loyal and loved by her mistress and who loves her mistress like a daughter/mother/friend etc. These stereotypes are rather revealing in our own prejudice towards humane treatment of all regardless of their social standing, yet given how essential it was for the aristocracy to be seen to have servants to do the cleaning, cooking, heavy work, and the relative separation of the classes, exactly how much of the idea of good will between the classes is wishful thinking. I wonder if this is a line of enquiry that would be interesting to pursue for your readers?

The truth was that for the Bloomsbury crowd, particularly after the first world war, their servants didn’t really want to be in the profession and had options elsewhere. Being a servant no longer had the prestige or the benefits of former times. And that’s exactly what the position was with servants/employers from the late eighteenth century through the Regency.

The Georgian servant population was mostly young (early 20s), transient, and planning and saving to get out of service. Visitors from abroad as well as employers complained bitterly about English servants’ rudeness, laziness, and greed. 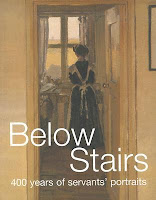 Yet at the same time there was a fashion in the late eighteenth century for employers to commission portraits of servants–out of nostalgia for the “good old days,” maybe? There was a terrific exhibit at the National Portrait Gallery in London a few years ago that brought together many of these portraits, and the book of the exhibit is well worth having–many great illustrations and thoughtful essays.

Most of the portraits were painted by local artists (unless of course the servant was background for a portrait of the family) and many of them have a “primitive” quality to them. Here are a couple of some of the most famous of the genre from Erddig, one of the most popular National Trust properties in England because of its servant history. 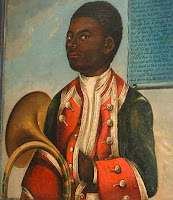 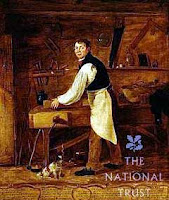 To me, one of the most striking things about these portraits is that the servants don’t look happy. Maybe they were ill at ease. The estate carpenter in particular looks as though he wants the artist to just go away so he can get on with his work. The Yorkes, the masters of Erddig, regarded their servants with great affection, wrote some rather bad poetry about them, and created at least one sinecure position, cobweb duster, for an elderly employee.

One major clue about master-servant relations in the Regency-Georgian period is the appearance in print of warnings to servants not to ape their betters, to behave respectfully, and to dress appropriately–and that suggests that servants needed this advice. This is rather ironic since for many positions, including those of lady’s maid and valet, one of the “perks” of the position was the employer’s discarded clothes.

Would you want this saucy minx washing your undies? Quite honestly, she looks like a real trouble-maker.

Back to Naomi’s letter. Which writers can you think of who show “realistic” relationships between servants and their employers? And if you’re a writer, how do you portray servants?

If you’d like to see the Riskies write about a specific topic, email us at riskies@yahoo.com. We always like to hear from you!

This doesn’t exactly address what you’re talking about, but I just wanted to say that I think modern Americans are very weird about servants.

Many of them seem to think it’s more or less immoral to hire someone to come into their house and wash their dishes (or clean their toilet), and that it’s necessarily “demeaning” to the person hired. And yet they’ll go out to restaurants without a qualm, though if you think about it they’re still paying people to wash their dishes and clean the toilet they use.

I do think it’s basically a weird taboo.

One of the country houses we saw on the last Romantic Road North tour was one in which the tour guides told us an early tenant had built a series of back staircases, tunnels, doors, etc, so that he never had to set eyes on the servants. My friend Julie will remember which house.

I like to include servants in my stories and I like to think of them as almost members of the family, people toward whom the employers feel a sense of responsibility. So I guess I write with those cliches you mentioned!

Diane, I know what house you mean. Bill Bryson mentions it in “Notes from a Small Island.” The owner was a notable eccentric (a euphemism for if he hadn’t been rich and/or titled they would have locked him up).

Cara, I think the oddest thing about contemporary domestic help is people like me who wouldn’t get it even if they could afford it b/c I’d have to clean first.

Did anyone see Manor House on PBS a few years ago, when the servants rebelled? I thought it was brilliant, and from what you’re saying totally true to the times. They just couldn’t take it anymore. I would love to read a book, where everything wasn’t so lovey-dovey between the servants and their employers. I think it would add another layer to the story. I remember reading that George Curzon didn’t trust his wife Mary to be able to deal with the servants and did everything which ended up leaving her powerless in the household, since the servants knew that he wasn’t the authority in the house, not her.

Ross Poldark’s servants, Judd and Prudy, were a hoot in the old Masterpiece Theater mini-series. I need to watch that again.

Most of my friends locally have housecleaners come in at least once a week. I don’t, it’s just not a high enough priority to make room for in the budget. LOL

It’s really funny that whenever something goes missing, every single one of my friends blames the housekeepers. Not as in stealing, but as in tidying up and not finding anything. It’s a suburban malady, I tell ya.

I do think think the US has a weird push-me-pull-you culture between our strong Puritan heritage and the desire to rise to the upper classes.omlpdoq

Elizabeth, I found the servant revolt fascinating, too. But what I found surprising was that the volunteers had no idea of how hard they’d have to work, particularly the scullery maid. I think they got through about three scullery maids in a week!

I have to confess I’ve done the fairly typical loyal retainer thing. The thing is, especially when writing the short traditional Regencies, there’s really not much room to develop more complex master/servant relationships. Unless it somehow supports or enhances the plot it could just be distracting.

I also honestly believe that good masters were likely to have happier and more loyal servants.

Another book that addresses the master/servant relationship is A TESTIMONY OF HER TIMES: Based on Penelope Hind’s Diaries and Correspondence 1787-1838. Penelope was the wife of a clergyman. She wrote about some of her servants and was especially fond of their children, perhaps more so because she never had abt of her own. It was clear however that the children were being brought up to be good servants. A bit disturbing to a modern mindset but still she and her husband did seem genuinely concerned about their servants’ welfare.

I saw Manor House and I agree, it was brilliant. The relationship between the butler and the lord seemed to illustrate the unique position of servants. The butler felt that he had given his all to the lord and was genuinely hurt when the lord didn’t appreciate it (I can’t remember the exact reason why). I think a butler or any other servant would probably have been more jaded after a few years in service, just like some people are jaded by work today. Servants back then may not have liked being a servant but they still needed money. As a result, they had to get up every day and go to work, just like us.

It’s really funny that whenever something goes missing, every single one of my friends blames the housekeepers. Not as in stealing, but as in tidying up and not finding anything. It’s a suburban malady, I tell ya.

That is funny. I’ve been thinking about hiring someone to clean a couple of times a month–but since I’m quite capable of misplacing things even without help, I’m not sure I dare!

I live in the UK and I remember that my grandmother’s neighbour had been ‘in service’ as they called it, as a young woman, before the second world war. She was fiercely loyal of the family she had worked for and she quite genuinely believed that they were her ‘betters’. I found it rather creepy as a young girl.

I’m sure there were lots of servants of who bitterly resented their lot in life and others who, while they may have accepted it, didn’t even respect their employers. However, I think it is entirely probable that there were such things as ‘loyal family retainers’.

I’m so glad you know about the Woolf book, Janet, I’ve been meaning to tell you about it and get hold of it myself.

I loved writing from the servants’ pov in The Bookseller’s Daughter.

And your post made me remember something I hadn’t thought of for years — a touching story a friend once told me, maybe 20-25 years ago. My friend had a good education, including a degree from the London School of Economics, and was later to go back to professional school.

But this was a hippie period — travel, meditation, music, whatever — she was earning a small living cleaning houses and trying to make herself believe she was enjoying her marginal life. Until one day she had to put something (probably socks) into her very wealthy employer’s sock drawer. And I remember how passionately she described just how beautiful all the very many pairs of socks looked to her, how neatly they were arranged, what a rainbow, a cornucopia of wonderful socks of every variety. And she felt so awful and envious that even though she didn’t need it she stole a pair of socks. And was soon to quit the job and go back to school.

First of all, thanks to to Naomi for bringing this up. Hats off to you, Janet, for this fabulous article.

Diane wrote, “…who wouldn’t get it even if they could afford it b/c I’d have to clean first.“
You always make me laugh…