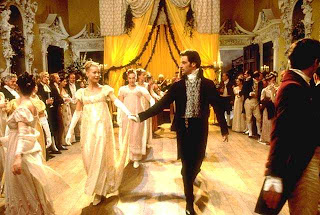 Or at least smile a lot and try not to tread on our partners while trying to remember What Comes Next?

I’ve danced English country dances just twice in the past, during the Beau Monde’s evening events at RWA conferences. It’s been fun but not as easy as it looks in some of the Jane Austen films. The figures may seem fairly simple when you’re just watching but when you’re in the thick of the action it’s easy to get confused. Add a dose of jet lag and a glass or two of wine and you have the makings of a proper train wreck. I’ve been in (and probably caused) a few. đź™‚

Anyway, I’ve always envied people who have the opportunity to take proper English country dance lessons and participate in events like the Jane Austen ball Cara blogged about. So did I feel stupid when I finally learned about Binghamton Community Dance’s English Country Dance classes via the UU church bulletin board!

Despite our insane schedule my husband and I have started the current set of classes. I’m still not the swiftest person there but at least the jet lag and wine aren’t factors! Most of the other people have been at it for a while, but they’ve been remarkably welcoming to us newcomers. The callers are patient and–here’s an amazing treat!–they have live music. A group called Fine Companions provide the music which includes cello, violin, piano and flute for what feels like a truly authentic and delightful experience. 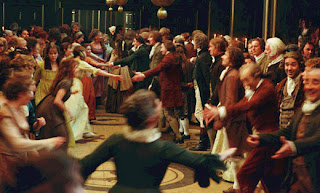 So far, I’ve made a few mistakes but with so many more experienced dancers around, I haven’t managed to cause a train wreck. Yet. :)And it’s been a blast. A psychic at a conference once told me that historical romance authors are reliving past lives. If so, I probably truly enjoyed dancing during the Regency even if, like now, I was more vigorous than graceful.

I do wonder what some of those balls were really like. People probably did dance the same dances for years so perhaps they danced as smoothly as those pictured in the film adaptation of Emma (at the top). On the other hand, I’ll bet they did imbibe quite a bit of wine or punch during those balls. Maybe some of the performances were a bit more ragged, like the Meriton assembly in the recent P&P.

What do you think? What has been your experience of English Country dance?

Elena Greene grew up reading anything she could lay her hands on, including her mother's Georgette Heyer novels. She also enjoyed writing but decided to pursue a more practical career in software engineering. Fate intervened when she was sent on a three year international assignment to England, where she was inspired to start writing romances set in the Regency. Her books have won the National Readers' Choice Award, the Desert Rose Golden Quill and the Colorado Romance Writers' Award of Excellence. Her Super Regency, LADY DEARING'S MASQUERADE, won RT Book Club's award for Best Regency Romance of 2005 and made the Kindle Top 100 list in 2011. When not writing, Elena enjoys swimming, cooking, meditation, playing the piano, volunteer work and craft projects. She lives in upstate New York with her two daughters and more yarn, wire and beads than she would like to admit.
View all posts by Elena Greene →
This entry was posted in Uncategorized and tagged balls, English country dance. Bookmark the permalink.

22 Responses to Shall we dance?