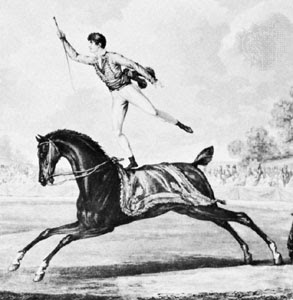 … the smell of the crowd…and other things

Today is the birthday of Philip Astley (1770-1814), founder of the famed Astley’s Amphitheatre, one of the hot spots of Regency London. He’s now seen as the father of the modern circus, and in fact established the standard circus ring size of 42 ft. diameter.

He began his career in the army where he fought in the Seven Years War and distinguished himself with his horsemanship and then left to become a riding instructor and performer. He rejoined the army again in 1793 when England and France were at war, taking emergency leave when his Amphitheatre caught fire. 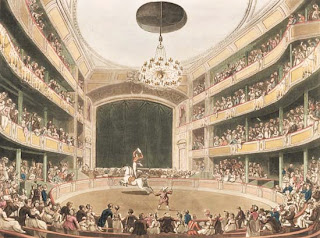 Tracy Chevalier has a terrific page on her site about Astley, who appears in Burning Bright, her novel about William Blake. And now it seems I’m going to talk about Burning Bright, which I enjoyed–sort of–I actually liked the circus stuff best, and admired the way she wrote about artisans. There’s a family who makes chairs and another character who makes Dorset buttons, something of which I was woefully ignorant; buttons were made of thread, woven together in intricate patterns, so all my characters whose buttons made a “pinging” sound as they hit the floor are about twenty years ahead of their time. 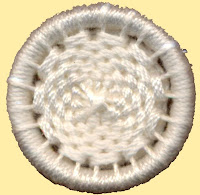 This illustration, of a Dorset basket weave, is one borrowed from the site of the British Button Society (yes, there is actually such a thing). What I didn’t get from the book is a clear sense of Blake and that was disappointing, but her depiction of Blake’s London was vivid and exciting.

There are any number of directions I could go from here, but I also wanted to add that I had a blast in NJ last weekend, signing as two people and giving readers the choice of the dirty book or the funny one; I finally got to meet Santa and a lot of other cool people; and Smartbitches are talking about Jane today.

So: have you been to the circus or read a good book recently?

Sign up for the Riskies newsletter at riskies@yahoo.com with NEWSLETTER in the subject line and learn to make buttons while standing one-footed on a horse!

Ah well, does life count as going to the circus, because there, yep. LOL 🙂 Thanks lots for this one — I think I’ve seen mentions of Astley’s, but never looked beyond that. 🙂

Yes, I’m reading a great book now called Forbidden Shores by someone named Jane Lockwood, who will doing a reading in New York on the 18th.

Haven’t been to the circus though since I was a teenager. Does Cirque de Soleil count?

Hi Lois and Elizabeth–gosh, I seem to have heard of that book somewhere…

My life feels like a circus sometimes, too–as a huge amount of people get off the metro and you start looking for red noses, for instance!

I hate the circus.
My son shares the same opinion: “Nobody likes a clown,” he said when he was about five.

I have read some good books lately, and more importantly, met up with some good friends! Yay NJ-RWA!

I read (most of) Burning Bright and feel the smarter for it. TC really made the reader feel immersed in the time period, and the fact that I have actually stayed in Piddletrenthide was pretty thrilling to me! I am currently reading Retro Housewife, full of actual ads from the 50s where everyone is deliriously polishing the refrigerator handle.

I love the pictures you find, Janet!

I’m not thrilled with circuses, but the smaller they are the better. No three ring circus for me.

I enjoyed hanging with Jane Lockwood and Janet Mullany at NJ. And with Santa! and meeting Elizabeth. Didn’t get to hang with Megan much. Sniff.

I read Burning Bright and the atmosphere you are suspended in when you read it is definitely worth the read. Loved this post, my dear! Great research type info as usual. I like the small family circuses as well. There was a small one in town several years ago when I was working as a vet tech for a local vet. I also volunteered at the zoo. The zoo vet called me one night and asked me to meet him at the circus. There was a Siberian tiger with a belly ache. I got to touch a Siberian tiger!!! Of course he was out cold, but that is beside the point! The cause of the tummy ache? Someone had thrown a bunch of caramel apples in his travel enclosure. He ate them sticks and all. We had to pump his stomach and then go in and take the sticks out. The most moving thing was that EVERYONE in this small circus sat outside the room where we did the surgery. They were all so upset and so concerned. The owner said, “I don’t care what it costs, please save him.” The tiger was 15 and had been with them since he was a cub. They cheered when we came out and said he would be fine. They stayed in town until it was okay for him to travel. And I got free tickets to the circus!! I had not thought about that in so long. Thanks for allowing me to relive that memory!

“My son shares the same opinion: “Nobody likes a clown,” he said when he was about five.”

Your son is wise, Megan. I’ve always found clowns to be strangely scary, too (and not just the Stephen King variety!) But I did cherish a hope when I was about five of finding a career on the trapeze. Until I discovered I was scared of heights as well as clowns. Oh well. 🙂

The pleasure was all mine, Dame Jane…er Janet.

Great books I’ve read recently? Why your ‘Rules of Gentility’ (fascinatingly good), Elizabeth Boyle’s ‘Letters from a Duke’ (fabulous) and Maya Rodale’s debut Regency ‘The Heir and the Spare’ (she’s one to watch friends).

Next on the TBR: ‘Forbidden Shores’ by that new name Jane Lockwood.

NJRWA was fabuloso! Hanging with Diane Gaston, Janet Mullany, Megan Frampton, Kristina Cook, Elizabeth Boyle and so many more. I didn’t get to meet Elizabeth but MAN can she dance!

I also got to meet some great some aspiring authors who just floored me!

I love circuses–went to quite a few. But with the loss of the Big Top and addition of three rings, my interest in circuses diminished. I find that sitting in a stadium with all that activity takes away the excitement of being part of the activity. The fun as a child was having the clowns interacting with the

I really don’t consider Cirque du Soleil as a circus. I’ve watched five of them and been awed by them all, but they’re Vegas shows, not circus shows. Without animals and clowns and slapstick… where’s the fun? Cotton candy, popcorn, clapping, screaming, laughing, scared, and oohing-aahing children… now, that’s a circus.

Janet, I’ve been following the Jane controversy with interest and a large dose of bemusement.

Doglady: You have the most fascinating annecdotes. What an exciting life!!!!

No buttons made of horn, Janet? And certainly there are brass buttons on gentleman’s coats, no? I shall hie me to the button society soon enough.

Re circuses — I was lucky enough to be able to send my son to a wonderful circus and performing arts summer camp, Camp Winnarainbow in northern California, run by 60s icon, hippiedom’s “clown prince” Wavy Gravy (also of ice cream fame) and his brilliant, fabulous wife, Jahanara. And I credit Winnarainbow for a big part of making my kid the terrific person he is. (Check out the Winnarainbow web site, Megan, and especially the video — it’s clowns and circus turbocharged with human goodness and supersmartness)

Pam, the circus camp looks fabulous. I think live-in camps for short durations should be part of growing up. I’ve added it to my list of interesting summer activities. However, I couldn’t find the minimum and maximum ages for kids. Do you know what those are? Thanks!

It’s on the dates and rates page, Kiera (go figure). A heap more pricey, I see, than when Jesse went (he’s a grownup now). But they do have a wonderful scholarship fund — the kids range from offspring of rock royalty to those of homeless people. And the accreditation board calls it a model of interracial harmony. (the Winnarainbow Scholarship Fund is probably the only cause I’d never miss a year of donating to, because when my kid was on staff he told me about some of the amazing ways kids’ lives were changed and the kids given opportunities they’d never have any other way).

Sorry to jabber on like this — but because my own kid has gotten so much from it, it’s hard not to.

The camp does seem like fun, Pam. I love the sound of the diversity, too, which is one of my favorite parts about living in Brooklyn.

My only circus memory is from when I was quite young…and pretty much all I remember was not knowing where to look (too much going on), and the toy someone bought me (which lit up when you spun it around.) 🙂

Pam, thanks a ton. We’re definitely going to be doing this in a few years when we, er, qualify. 🙂 (Nothing like being prepared in advance, right?) It sounds so very cool!

keira, I never really thought about it before, but it has been a “long strange journey” LOL I have been very fortunate to be in the right place at the right time on more than one occasion. Or maybe the wrong place at the … well, you get the picture. Many of my interesting jobs were to ones I took after my hubby died and i was just sort or wandering through life. I was just lucky enough to be paying attention. One of my voice teachers used to say “The great majority of people go through life virtually asleep. It is a pity. The few who stay awake are in a state of constant amazement.” So here I am, just trying to stay awake. Never know what you might miss!

See, doglady, that’s what I mean. Those anecdotes! 🙂 I’m looking forward to reading you in print!h

Well, there’s Circus Cirus in Las Vegas…but before that it’s been many years.

When I was a kid and my mother took me to the circus, I was surprised and how scared she got during things like the tight rope walk without a net. I think I had a child’s confidence that they wouldn’t do it if anything could go wrong; my mother knew better.

NOt only have I been to the circus, but I worked for one for almost a year. A one ring circus in NYC.

Met my husband there too.