AUSTEN TREK: Once Upon a Rec Room

Hidden in the Federation Archives is this never-before-seen account of Yeoman Rand’s first days on the Enterprise: 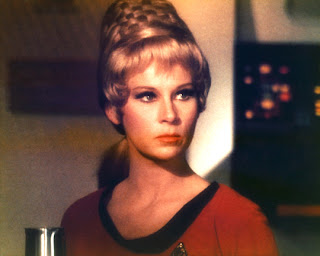 Every stardate now brought its regular duties;–Captain Kirk’s orders were to be recorded; some new part of the ship to be discovered; and the Bridge to be attended, where officers spent hours staring at whirling lights and, on occasion, falling out of their chairs.

Yeoman Rand, however, knew no one and, consequently, spoke to no one, and no one spoke to her. The wish of a numerous acquaintance on the ship was uppermost on her mind, and her heart wished it anew after every fresh proof, which every stardate brought, of her knowing nobody at all.

She made her appearance in the Rec Room; and here fortune was more favourable to our heroine. Captain Kirk, the only inhabitant of the ship with whom she had as yet exchanged more than half-a-dozen words, was present; he, with infinite condescension, engaged her in conversation. 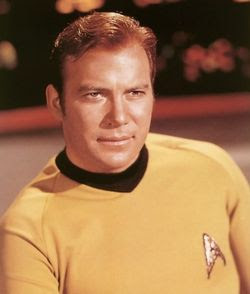 The captain seemed to be about four or five and thirty, was of middling height, had a pleasing countenace, a very intelligent and lively eye, and, if not quite handsome, was very near it. He talked with fluency and spirit–and there was an archness and pleasantry in his manner which interested, though it was hardly understood by her–or, if truth be told, by himself.

Forming his features into a set smile, and affectedly softening his voice, he said, with a simpering air, “Have you been long on the Enterprise, Yeoman?”

“About a week, sir,” replied Rand, trying not to laugh.

“Why should you be surprized, Captain?”

“Why, indeed!” said he, in his natural tone. “Were you never here before, Yeoman?”

“Indeed! Have you yet honoured the Sick Bay?” 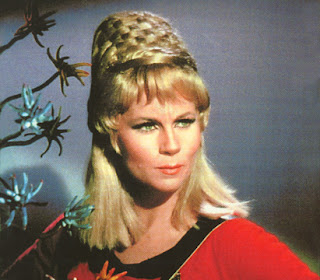 “Have you climbed in a Jeffries tube?”

“Yes, sir, I was in a Jeffries tube on Tuesday.”

“And are you altogether pleased with the ship?”

“Now I must give one smirk, and then we may be rational again.”

Rand turned away her head, not knowing whether she might venture to laugh.

“I see what you must think of me,” said he gravely– “I shall make but a poor figure in your log tomorrow.”

“Yes, I know exactly what you will say: Friday, went to the Rec Room; wore my red dress with the three-inch skirt–long black boots–appeared to much advantage, particularly in the gap between the aforesaid items; but was strangely harassed by a queer, half-witted man, who would make me talk with him, and distressed me by noticing my legs.”

“Indeed I shall say no such thing. I had much rather you notice my legs now, on the ship, than wait until we are on a planet, when there are certain to be bizarre blue growths on them.”

And don’t forget — on the first Tuesday of November, we’ll be discussing the Colin Firth/Jennifer Ehle Pride and Prejudice!

Cara
Cara King, who would far rather climb in a Jeffries Tube than wear a miniskirt

Cara, you have a strange and wonderful mind!

I’m home sick today, and your strange blue growths in the morning have cheered me right up!

I could never write this kind of mash-up–kudos, Cara!

Thanks for the kind words, Janet and Megan! And Jane — sorry you’re sick, but so glad I could cheer you up at all… (Hope you feel better soon!)

Cara, I’m with you on the Jeffries Tube. You wouldn’t catch me dead in a mini skirt. I might cause a ton of swooning if I swaned about in a three-inch (eye-roll) handkerchief.

hahahaha! I have some friends who need to see this!

I have some friends who need to see this!

Glad you enjoyed it, Jessica! BTW, if you’re interested, you can click on the link “austen trek” at the bottom of the post, and that will give you all my previous installments of Austen Trek. (Most of which are better than this one, I think!)

Cara, I emailed this to my girls! Now I need to read the rest!

Another FABO episode Cara!! I have told my BFf she HAS to hop over here and read the entire saga. And honey I would rather kiss a Klingon in a Jeffries tube than wear a mini skirt!!

Cara – you are a genius! And doglady, kissing a Klingon who looks like Worf would seal the deal for me as well!

Cara, Todd, and dear Bertie: How are you guys doing with SoCal up in flames? I hope you’re safe as is your property.

Cara, Todd, and dear Bertie: How are you guys doing with SoCal up in flames?

We’re all doing fine, Keira, thanks! The three of us are very citified folks (blame Bertie, who likes going out on the town, but doesn’t know how to drive) and so we don’t live near any hills or forests or anything else that might go up in a wildfire.

The sky was rather orange today, though…

Inspired by Star Trek, I have been waiting much of my life for that future to arrive in which all the women dress in miniskirts. Eventually I reached the conclusion that that future has come and gone–it was called “The Sixties.”

Cara, Todd, and dear Bertie: How are you guys doing with SoCal up in flames? I hope you’re safe as is your property.

Thanks for your concern, Keira! We’re all fine; the flames are not very close to where we live. There have been fires in the past that were a lot closer to here, but we’re not really in the path of danger; if we go up, so does have the city. (Which is not a happy thought, now that I come to think it.)

Glad to know that you three are just dandy, well, that is, one dandy and two very fine, er refined folk.

Cara, loved this as I did the others. I don’t know that it’s not as good–I need to install a spewed-coffee-meter on my keyboard to figure out exactly how funny each one is. I recommend them all!

And I would never wear a miniskirt but would definitely kiss Worf. What a sexy voice the man has, too!