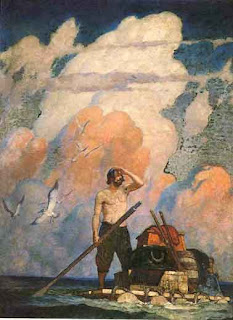 In last week’s experiment with Gender Genie 4 out of 6 Jane Austen heroes tested out as girls based on their dialogue. Thinking this might reflect the gender of the author, I decided to try some heroes from period novels by men. I ran Sir Walter Scott’s Waverley and Guy Mannering and found they squeaked out as males, though not by a lot. Going back a bit earlier, I checked out Robinson Crusoe. According to Gender Genie, this macho survivor is overwhelmingly a girl. (Wonder what this means for his Man Friday?)

I boldly took the next step: putting some of my own heroes’ dialogue through the thing. Ack! My last two heroes, Verwood of SAVING LORD VERWOOD and Jeremy from LADY DEARING’S MASQUERADE both tested about as girly as Mr. Knightley and Captain Wentworth. Though I put it down to period dialogue, it still scared me. Though both these books did well, perhaps readers prefer heroes in modern historical romance to speak a bit more like modern men (none of the words used by Gender Genie to differentiate between male and female are anachronistic to the Regency).

So I ran dialogue for several popular (and RITA winning) historical romance heroes through the tool. And to my great relief, Rothgar from Jo Beverley’s Malloren series and Reggie Davenport from Mary Jo Putney’s THE RAKE AND THE REFORMER both tested out in a similar range.

I feel vindicated. Readers are smart enough to recognize a character’s masculinity despite period dialogue. Whew! 🙂

Just for giggles (and you thought we were done–ha!) I decided to run a contemporary romance hero through the tool. I chose Ken from Suzanne Brockmann’s OUT OF CONTROL. I figured a modern Navy SEAL ought to test out male. He did, with the most masculine score of all the heroes I ran through the tool. So maybe Gender Genie has some validity for those writing contemps.

Anyway, I’m done worrying about Gender Genie. I will just have to find something else to obsess about now. 🙂

Is there anything you get OC about? Re works-in-progress or anything else? Do you dive into these things or wisely avoid the temptation?

The thing is, something like the Genie, one can’t be sure you can trust it. . . never know how it was created and all that stuff. 🙂

Oh me, I obsess on plenty. But I also am plenty lazy. LOL Depends on the mood or what it is, I guess. LOL 🙂

It’s so easy to obsess about things, particularly when I have an incentive to procrastinate :-). I have to remind myself of the motto my mom had taped to her typewriter–“don’t get it right, just get it written”. As to gender genie, I ran a bunch of my characters through and both the men and the women tested male sometimes, female others depending on which excerpt I used.

I was very tempted to visit this site, Elena, but so far I’ve resisted! I would be so upset if my heroes were girls. 🙂

Tracy, I like your mom’s motto. I’m going to have to remember that…

Elena, this site is endlessly fascinating thanks to your experiments. As Lois said, depending upon the benchmark list of words (assuming it’s a straight glossary kind of thing and not grammar), Shakespeare’s and even Dante’s characters are going to come out wimpy gammas, instead of macho alphas. Then there are the modern-day heroes from different cultures, even English-speaking cultures, who are going be beta-ish compared with Navy Seals and JR Ward’s Brothers.

I get obsessive over everything. (Surprise, surprise.) 🙂

Hey, I wonder if Bertie’s secretly a girl…

Cara! Poor Bertie. You’ll give him a megrim.

I just stayed up all night finishing revisions that took a remarkably long time. I had to obsess about dates, specific dates. What a nightmare that was.

First let me say I love your books. Where do you get your ideas for these great stories? I also wish I had a reedar so I could read all of your books. Are you going to be releasing anymore in print?

I obsess about loads of things–getting books I will probably wait years to read, Deadwood (sniff!), The Wire, Clive, cooking Indian food . . . whatever I am into, I am usually obsessing over.

I have not visited the Genie either, don’t wanna know Alasdair (current hero) is girly. He’s not, but, you never know.

Need you even ask? Of course I am male. Very much so. (If you don’t believe me, ask Milady Soleore!)

But as there are some of you (who shall nameless remain) who apparently require proof, I have now had my valet run several of my posts through the Gender Djinni.

My actual score was 2605 male, and 2317 female. Which, I am assured by my valet (who is a lowly fellow, and therefore can do arithmetic), results in a maleness score of 53%, the ideal number for a cultured gentleman.

I daresay that prizefighters and bootblacks and plowhorses score higher on the male scale, but who in the world would wish to read what they wrote?

I hear you on that one, Megan! When will we ever know what happens???

Of course darling Bertie is male, a very cultured, well-dressed male, but male nonetheless! I never doubted you Bertie. I ran some of my scenes through the Gender Genie and was lucky enough for Marcus to come out male most of the time or close. I am not going to obsess over it because the typical Regency period male may not translate. I do, however, obsess about everything else when it comes to my writing. I research endlessly and I drive myself nuts saying “Does that sound right? Would he say that?” I’ll be looking for the men in the white coats about the time I finish my novel!

Bertie said, “If you don’t believe me, ask Milady Soleore!”

Bertie dear, hush now. Surely you didn’t have to put it in quite those words, did you??

Bertie dear, hush now. Surely you didn’t have to put it in quite those words, did you??

Indeed, Bertie, I’m shocked at you! A gentleman doesn’t kiss and tell, after all.

Do I obsess about things? Gosh, that’s an excellent question…do I, or don’t I? How can I be sure? Is thinking about something a lot the same as obsessing?!! Does it have to do with the degree of intensity??!! Or how emotional it makes you??!!!!

Aaarrghh!! How can I know? Now I’ll be doomed to wonder about it for days!!!!

My elegant cheeks are now quite red! (How fortunate I am that I look quite handsome in that shade!)

My dear Mlle. Soleore, a thousand pardons! It never crossed my mind that my statement might have the implications that it now appears it has!

“don’t get it right, just get it written”.

I should tape this to my keyboard too, Tracy! Thanks for the reminder. It’s especially hard right now because I’m working on 3rd draft and thinking every word should be perfect, when in reality I’m still making big changes like deleting and adding scenes.

Bertie, I never doubted you though somehow I was not surprised you scored high in both ranges. 🙂