Last week I went down to Dallas to see an exhibit called “Star Struck: Hollywood Costumes and Designers, 1934-2006.” It was a smallish exhibit (18 gowns plus a collection of sketches), but it was very comprehensive and had some great stuff. If you visit here very often, you know how excited I get about movie costumes! You can see an article about the exhibit here.

A few of the highlights were:

Replicas of the green and white organdy barbecue gown from Gone With the Wind and the Royal Ascot gown and hat from My Fair Lady (because the originals either no longer exist or can’t be found). I’ve long had a lust for that hat (I LOVE hats!)

All the other costumes were originals, and included the red satin gown Nicole Kidman wore in Moulin Rouge

A couple of kimonos from Memoirs of a Geisha (not the ones in this pic, but similar)

The blue velvet suit from Titanic

And my very favorite, the wedding gown from Marie Antoinette! Photos weren’t allowed in the exhibit, but this gown was in a case that could be walked all around, so I could examine the elaborate silver trim, the cut of the satin, the lacings up the back. It was gorgeous. Someday, if I ever get up the courage to get married, I’ve decided on an eighteenth century theme, with a gown like this one. đź™‚

We’re also coming up on my Very Favorite holiday–Halloween! I’m going to a party tonight, and this is my costume, based around a great hat I found at Target and some fabulous chiffon fabric for the sleeves. 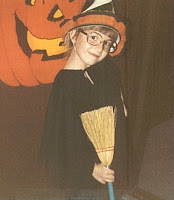 Last time I was a witch it looked like this: 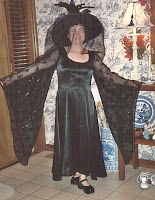 And Abigail is going as Snow White. Isn’t she just the cutest Disney Princess ever??? (Victoria has a very cute Jack Sparrow costume, but alas won’t wear it. I will try to get pics of her later). 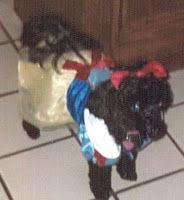 Happy Halloween everyone! What is your costume, either real or fantasy?

Be sure and sign up for the Risky Regencies newsletters at riskies@yahoo.com, with “Newsletter” in the subject line. It’s all treats and no tricks!

Thnaks mucho mucho for the post. Ooh, that Ascot hat! I’d love to see you in those wide panniers and have your groom strutting in on red heels with powdered hair and face, and a beauty patch on the cheek bone. đź™‚ Love your black outfit. From Target?? That’s one fab hat!

We have a party to go to Wednesday night after Ms. Wee has her neighborhood trip and all the kiddies stop by for their candy. I’m as yet undecided what I’m going to go as.

I’m going to a party tonight and will wear my Regency dress. I haven’t worn it since dancing in it at the Assembly Rooms in Bath.

The costumes are fabulous. What fun to see them up close.

And you make an elegant witch. Are you the evil witch to Abigail’s Snow White?

What a great exhibit! And love your costume! I used to Halloween growing up, not for the candy but for the chance to dress up as whoever I wanted to be. I usually go trick-or-treating with a friend and her daughter and I often wear a costume for fun (no I don’t ask for candy :-). Last year I wore a long burbudy and a gold chiffon skirt, a beaded black velvet corset top and a reproduction tiara I got at an art deco exhibit and said I was Tatiana from “Eugene Onegin”.

Well, the last time I dressed up, going back a bit over 10 years now to Junior year of high school, I did wear my Star Trek: The Next Generation red uniform shirt. No lousy captains here, I was an Admiral, thank you very much. đź™‚

As for dressing up now, I have too many ideas of stuff to do. . . just never any place to try them!

Lovely exhibit! Wish I could see it. Thanks for the pics! And Abigail is just darling.

I don’t have a costume — nowhere to wear one — but my stuffed cat does have a Scotty-from-Star-Trek costume. I made it for him for a fan convention, but he can also wear it on Halloween if he likes. đź™‚

Cara (who lives in an alternate reality)

“Love your black outfit. From Target?? That’s one fab hat!”

Well, the hat (plus the broom and a little cauldron) came from Target, I got my mother to make the dress. đź™‚ What is Miss Wee going to be wearing this year?

“And you make an elegant witch. Are you the evil witch to Abigail’s Snow White?”

I envy you going to a party, Amanda! And that exhibit, too.

Ammanda, Miss Wee wanted to be a blue macaw for months. We have a zoo close by that houses macaws, and we’ve been there so many times, that they recognize her. Anyways, so I searched and searched for something. Finally, a friend found the perfect one on eBay. Miss Wee was thrilled with it when it showed up. Then three weeks ago, she decided she wanted to be a princess. Whenever anyone asks her, she says that’s what she’s going to be (fact instead of a figment of her rather active imagination). And now, with three days to go, I’m stuck between pulling parental rank and making her go as a macaw or giving in and whipping up a princess costume. Aiee!

“And now, with three days to go, I’m stuck between pulling parental rank and making her go as a macaw or giving in and whipping up a princess costume.”

Maybe you could tell her she’s Princess of the Macaws. Add a tiara or something. đź™‚

Oh, Amanda, that green and white dress of Scarlet’s is one of my all time favorite dresses. I even bought the Barbie doll and a collector’s plate with Scarlet in that dress. đź™‚