Do you believe in spooks?

The Haunted Homes of England,
How eerily they stand,
While through them flit their ghosts–to wit,
The Monk with the Red Hand,
The Eyeless Girl–an awful spook–
To stop the boldest breath,
The boy that inked his copybook,
And so got ‘wopped’ to death!

from “The Haunted Homes of England” by Andrew Lang
(Read the rest here.) 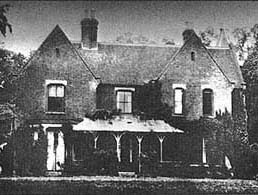 Borley Rectory (shown here) has been called the Most Haunted House in England. Though the house was built after our time and has since burned down, the ghosts must have been around for much longer and reports of their activity continue. 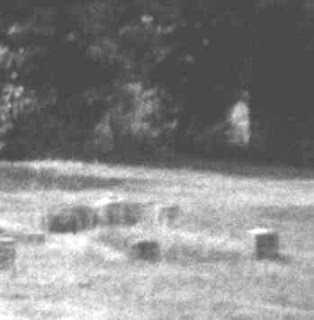 The legend goes that a monk from Borley Monastery had fallen in love with a nun and both were killed when caught trying to elope. Here’s a photo purportedly of a monk walking near a grave on the grounds. Click here to read more about the hauntings at Borley.

The National Trust has just released a list of the 10 most haunted historic houses in England. I’ve been to only one of them–Dunster Castle–but did not see its famous Green Man, alas. 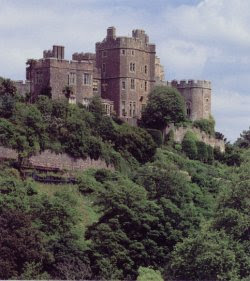 I do love the whole idea of weird phenomena. While touring the area around Loch Ness I kept my eyes peeled–in vain–for the monster. When at stately homes reputed to house ghosts (tour guides often make a point of mentioning them) I kept a lookout but never saw anything. Sigh…

My only possible brush with the paranormal occurred at my first visit to a friend’s Civil War era house in Pennsylvania and it could all just be overactive writerly imagination, since my friend had already boasted of how haunted the house was. I felt shivery the whole time I visited, although I’m hardly ever cold and it was a warm summer day. When touring one of the upstairs bedrooms I got a strong impression of having a young child hanging on my leg. My friend told me one of the most active ghosts in the house was a small boy who often liked to attach himself to motherly visitors. Yes, I was spooked. But that was my first and last ghost encounter and I’m not convinced it wasn’t my imagination.

I still love the idea of ghosts and will probably put one in a story someday. I know there have been a number of Regencies with ghosts in them but have to confess the only one I’ve read was Eileen Putman’s THE PERFECT BRIDE, which I enjoyed very much.

So do you believe in spooks? Have you ever had a haunting experience of any sort? Have you visited any of these famous haunted homes and what did you see? Do you have a favorite romance with a ghost in it?

In any case, Happy Halloween! Don’t eat any more candy than I will! 🙂

Hmm, I can’t say I’ve ever had a ‘spooky’ or ‘ghostly’ experience. Do I believe in them? I think anything is possible. I certainly would never dismiss the possibility that they exist.

Don’t eat any more candy than I will! 🙂

Your word is my command, Elena. However, to comply, I will need to know exactly how much candy you’ll eat. Please respond by return of post.

As to ghost romances — I’ve always loved Barbara Metzger’s AN ANGEL FOR THE EARL… Which, come to think of it, might actually be an angel book rather than a ghost book, but I remember it as a ghost book…

And some of the stories in the Signet anthology REGENCY CHRISTMAS SPIRITS had ghosts… That was a particularly fun anthology, IIRC! Each author interpreted “spirits” as she wished, and sometimes it meant ghosts, and sometimes, alcohol… 🙂

Yes, Elena, please do clarify as to the exact amount of candy you intend to consume. I have had a number of haunting experiences and therefore yes, I do believe in spiritual energy that stays behind and at times communicates with us. My two goats, Romulus and Remus were raised by an Great Pyrenees named Sherlock. Even after he was killed by a freak lightning strike I could smell him in the barn when the goats came in at night. I sometimes sensed him brushing against me when I went to bring the goats in from the pasture. After they passed away I never felt or smelled him again. Then of course we lived in a haunted house in England. My baby brother’s imaginary friend turned out to be the ghost of our landlord’s brother who died in the house.

Omigosh, doglady, that is so….spooky.
I think my mother’s ghost visited me twice right after her death. When I was alone late at night the television suddenly switched stations and the cats were spooked. I wish now I’d talked to her, but I had that “I can’t believe this” feeling and didn’t figure it out until later.

I don’t have any personal ghostly experiences, but I’ve visited Sherrie Holmes’s haunted house. It was investigated by the scientific and psychic team of the Washington State Paranormal Investigations and Research organization which found several spirits there, including a little girl named Holly and an old woman named Opal. All her spirits are friendly, there, say the WSPIR investigators, because they like Sherrie and feel protective of her. Her house has a very peaceful, welcoming atmosphere.

I don’t think I’ve ever seen/felt a ghost myself (though once I was in the ladies’ room at a haunted hotel, where you’re supposed to be able to see the ghost in the mirror–I washed my hands with eyes closed, LOL). I’m open to the possibilities, though. 🙂

I’m not sure how much candy you consumed, Elena, but I probably had more. Ugh.

I’m really confused by this discussion. Surely it’s a matter of fact rather than belief? And while it is true that they can be a bit creepy, and pursue their own unknown purposes beyond human ken, it isn’t reason to disbelieve in them, I hope?

But just to go on the record: yes, I do believe in goats. So I’m with you there, Doglady!

Doglady and Diane, thanks for sharing your experiences. It makes me feel a bit less crazy about my own. And Judith, I would love to visit Sherrie’s house sometime. I remember hearing about the scribblings on her kitchen floor–Holly, I suppose?

I hope everyone had fun last night. My kids and I did a major Harry Potter theme: one was Hermione, the other Hermione’s cat Crookshanks (in a truly awesome costume if I say so myself). I went along as Professor McGonagall, donning a black turtleneck and skirt, an old-fashioned brooch, my reading glasses, a green shawl and a witch hat I decorated with a ribbon and some feathers.

As to the candy, you’ll just have to guess how much I consumed. 🙂

No, thankfully no ghosts here. 🙂 And well, we didn’t have much chocolate here. . . so if anyone has any that they really need to get rid of, I’m always willing to take it off your hands. 🙂

Off hand, I can’t think of any Regency spooks that I’ve read, though I’m sure I caught one or two, but there are Teresa Mederios’s Vampires that I reread last week. 🙂