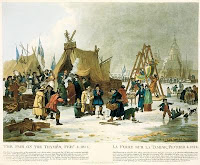 I’m doing research for a new book. I won’t say too much it yet, but part of my research has been about the last frost fair held on the Thames for a few days in February, 1814.

From about the mid 14th century to the early 19th century (the little ice age), the Thames sometimes froze solid in the winter and fairs were held on its ice. The climate was not the only reason the river turned to ice. The Thames was shallower then and the old London Bridge was built in a manner that slowed the flow of water and fostered freezing.

The first recorded frost fair was held in 1608, but the one I wanted to know about was the frost fair of 1814, The Last Frost Fair. 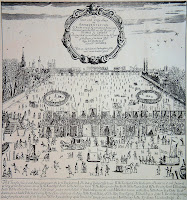 Joy Freeman wrote one of my favorite old Regencies titled The Last Frost Fair, which is where I first heard of the event. It seemed perfect to use in my new story and I knew just where to look for more information–The Annual Register of 1814

I have all the Annual Registers from 1810 to 1820. The Annual Registers are a little like almanacs with all the parliamentary issues, births, deaths, marriages of important people, poetry, and the most interesting news stories from the year. The Annual Register for 1814 is on google books so you can read it for yourself. The account of the fair begins on page 11 of the Chronicles, beginning on February 1 and ending February 7.
Another book with a good description of the Frost Fair is John Ashton’s Social England under the Regency, also on googlebooks.

Ashton describes the frolickers playing skittles, drinking in tents “with females,” dancing reels, more sedate coffee-drinking, and gaming booths. Souvenir cards were printed on printing presses set up on the ice. The Annual Register said the carousing went on until the ice began to break up and then people went scrambling to safety. There was some loss of life and there never again was a freezing of the river sufficient to hold a frost fair.

Have you read any books that show the Last Frost Fair?
Did you read Joy Freeman’s book and what did you think of it?
Are you curious as to what my new book is about? (cuz I’m still not telling)

Come visit my website. I have a new contest this month, continuing my countdown to The Vanishing Viscountess in January.

Having never attended such a fair, I’m very curious about it. The name “Frost Fair” brings to mind a Hans Brinker type crowd, all on roller blades visiting merchant stalls, food stalls, and laughing over silly contests and games, with accompanying musicians somewhere and some country dancing.

Why was 1814 decided as the year the fairs must stop? Something different was going to be done to the Thames? They were experiencing a warming, kind of like what we’re facing now (well, except those of us in the chilly northwest).

I’ve actually been doing some research on a frost fair held in 1565 for a new story! (One inspired by last season’s Dancing With the Stars, LOL). I wonder how the two same events separated by so many years were similar?

If I remember correctly, Elizabeth Mansfield wrote a book that used the last Frost Fair. I’ve always thought they sounded so interesting. Imagine if the Hudson River could do that!

Keira, it was the end of a minor ice age that had begun in medieval times and lasted into the nineteenth century, which is why Dickens’ Christmases are so very cold and snowy.

Diane, when I blogged about this last year I found these snippets of information, probably online somewhere. Altogether it was a triumph of capitalism:

The Frost Fair of 1814 was the last of its kind, and featured an elephant being led across the ice near Blackfriars Bridge (according to one source I found), donkey rides, and the roasting of a whole sheep on the ice. People had to pay to see the sheep roasted and then pay for a portion of “Lapland Sheep.” Nine printing presses churned out souvenir items.

I read a Regency that featured the Frost Fair, too; not sure who wrote it, it was awhile ago I read it, but it sounded amazing.

Plenty of opportunity for ‘must get warm’ snuggling.

See, I’m just the sort of person who’d have said, “a bonfire on the ice? Doesn’t sound safe to me!”

Clearly most Regency folk were more daring than I am… 🙂

Joy Freeman wrote the traditional Regency that I’ve read based around that last frost fair.

Diane, I’m very curious about your book! I’ve always been intrigued by the Frost Fair, though I’ve never used it in a book. Does anyone know if the river partially froze in other years (though there wasn’t enough ice for a fair)?

I’m pretty sure I have read here and there books that mentioned the fairs but I just really can’t think of any — but they weren’t the main focus of the books, just something someone went to. 🙂

Diane, I’m very curious about your book! I’ve always been intrigued by the Frost Fair, though I’ve never used it in a book. Does anyone know if the river partially froze in other years (though there wasn’t enough ice for a fair)?

‘The Further Observations of Lady Whistledown’ is an anthology featuring Julia Quinn, Suzanne Enoch, Karen Hawkins and Mia Ryan. It’s a delightful set of novellas wherein all the stories converge at one point or another at the Frost Faire of 1814.

It’s a fun read that never fails to put a smile to my face. I am also looking forward to going to my UBS (I love that place) for the Regency trads you talk about here.

‘Natch, I am looking forward to more great books from Diane and Amanda featuring the frost faires.

Ack! I forgot that you blogged about the Frost Fair, Janet.

Not only was there a climate change, but the old London Bridge was torn down in 1830 or so and its design did not slow the current like the old Bridge did, so freezing was less likely. After 1814 the Thames never froze again, at least enough for a frost fair.

They are still having frost fairs but ALONG the Thames, not on it.

I don’t believe I’ve read the Elizabeth Mansfield book but Joy Freeman’s The Last Frost Fair was a very emotional story, so much so, I still remember it!
I haven’t read the anthology, Santa, but it does sound like a lovely one.

Keira, the fair does sound like you described it.

I can’t wait to hear about your next book!

Nicola Cornick recently used a Frost Fair–I think it was in Lord of Scandal. There were some marvelous descriptions of the fair.

I can’t believe I missed Mary Blayney’s visit! Can’t wait to get her latest…Danged family events. 🙂

I vividly recall Joy Freeman’s book, and if there was a Mansfield one I’m sure I read it too.

Coincidentally, the Frost Fair of 1683/4 is frequently popping up in research for my historical novel. The following year, I believe, shortly before King Charles II died, the river froze at least partly. Walking on the ice was possible but not the booths and bonfires.

A frost fair and Dancing with the Stars… aha! Ice Dancing, the original version, dated 1565. 🙂

Thanks, Janet. So, global, well, Euro- warming made the frost disappear, and thus, the end of the fairs.

Printing presses churned out promo items. Heh. Heh. What a delicious tidbit. And that poor, poor elephant. First, it had to suffer through an ocean voyage from Asia and then it had to endure an undignified skidding across ice.

Margaret, the black & white engraving on the blog is from the 1683 frost fair.
Wasn’t Joy Freeman’s book memorable!

Hi, Deb! Yesterday was a crazy day. Everyone seemed to be busy during the day and we were not at all certain anyone would comment!!

Keira! you made me smile with your empathy for the elephant!

Oh, and happy Guy Fawkes Day everyone! (Not that that has to do with anything, I just felt like saying it to someone…)

Acck. I could have blogged about Guy Fawkes!

Who else would appreciate you saying Happy Guy Fawkes Day but the Riskies?

I remember a scene in the film Orlando set at a Frost Fair in Elizabethan times. (I am ashamed to admit, I don’t actually remember the book well enough to remember if that scene occurred in the book or was made up for the film.) It was visually very striking.

With the current climate change, there is a chance that in the next century the Gulf Stream could shift; in which case the Thames may start freezing on a regular basis. But let’s hope not. 🙂