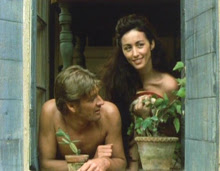 I am apologizing in advance for this very lame blog. Last week I caught a cold and also slipped in the bathroom, jamming my big toe. So I’ve been sniffling and hobbling and generally slow to get things done. I really should have asked on of my fellow Riskies to cover for me today. But it’s too late now, so you’ll have to bear with my ramblings!

Despite the cold I’ve still been trying to partake in National Novel Writing Month. For anyone who hasn’t heard of it, NaNoWriMo poses the challenge of writing at least 50,000 words of a new novel in thirty days. This year about 100,000 people all over the world are participating. I’ve even met some Dutch romance fans who are interested in the Dutch translation of LADY DEARING’S MASQUERADE. Though I’m barely hanging in there with wordcount, I’ve had fun so far and gotten some new ideas.

However, yesterday I took the afternoon off writing to concentrate on research. Yes, heavy duty research. I spent a whole couple of hours curled up in bed watching Sharpe’s Revenge. I’ve been working my way through the series as background for my military hero. How I suffer for my craft! I do adore Sharpe, even though he falls in and out of love too quickly to be an ideal romantic hero. I wonder if this is why some of us are writing (or thinking about writing) our own Peninsular war stories?

I haven’t used them this time round, but some of my other favorite ways of salvaging a sick day are rereading Jane Austen, Georgette Heyer and Loretta Chase. Obviously, I study them in order to understand what makes a good comfort read.

Do you have any favorite ways of “working” while sick? What are your comfort reads? If you’ve seen it, what did you think of Sharpe’s Revenge? Of the romantic elements in the series as a whole?

Elena Greene grew up reading anything she could lay her hands on, including her mother's Georgette Heyer novels. She also enjoyed writing but decided to pursue a more practical career in software engineering. Fate intervened when she was sent on a three year international assignment to England, where she was inspired to start writing romances set in the Regency. Her books have won the National Readers' Choice Award, the Desert Rose Golden Quill and the Colorado Romance Writers' Award of Excellence. Her Super Regency, LADY DEARING'S MASQUERADE, won RT Book Club's award for Best Regency Romance of 2005 and made the Kindle Top 100 list in 2011. When not writing, Elena enjoys swimming, cooking, meditation, playing the piano, volunteer work and craft projects. She lives in upstate New York with her two daughters and more yarn, wire and beads than she would like to admit.
View all posts by Elena Greene →
This entry was posted in Uncategorized and tagged NaNoWriMo, National Novel Writing Month, Richard Sharpe. Bookmark the permalink.

18 Responses to Working while sick