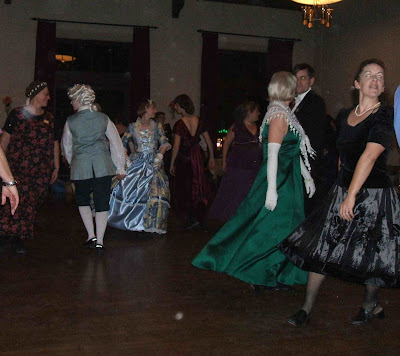 I know a lot of you read my January post on the Jane Austen Ball. (And there’s another Jane Austen Ball coming up in two months! If you plan on going, get your tickets now, because they’re going fast!)

I have now danced at two Playford Balls, and five or so Jane Austen Balls — and there are of course lots of similarities. 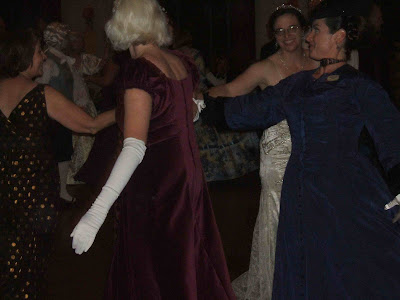 In other words, you can’t lose either way.

The oldest dance we did at this Playford Ball was “Picking of Sticks,” which appears in John Playford’s first (1651) edition of THE ENGLISH DANCING MASTER. In this book, Playford would give the melody line of a dance, and then all the basic steps. 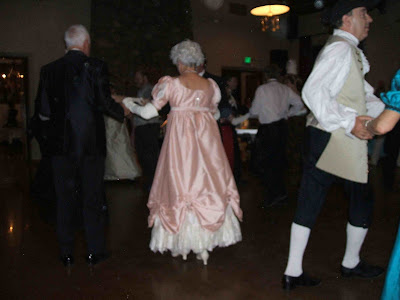 Sometimes his directions are clear:

Leade up all a D. forwards and back. That againe. First man change places with the 2. Wo. then with the last man. Leade up as before, then the Wo. change as the man did, every Cu. doing thus.

Sometimes, however, Playford’s directions are a bit harder to understand: 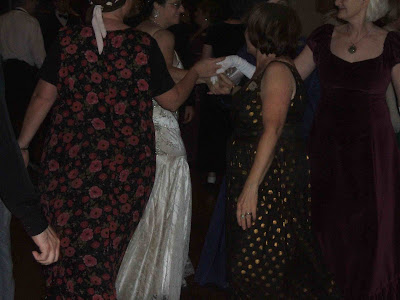 If we go by Jane Austen, folks danced a lot. Which makes perfect sense, really! It warmed you up. It showed off your clothes.

If you were looking for a spouse, it displayed your looks and your health, and gave a chance for flirtation and a bit of touching.

If you already had a spouse, it also gave you a chance for flirtation and a bit of touching — all perfectly proper, dear, I was just doing the dance.

The cotillions were over, the country-dancing beginning, and she saw nothing of the Tilneys. “Do not be frightened, my dear Catherine,” whispered Isabella, “but I am really going to dance with your brother again. I declare positively it is quite shocking.”

And later, of course, Tilney and Catherine have the famous exchange:

“I consider a country-dance as an emblem of marriage. Fidelity and complaisance are the principal duties of both; and those men who do not chuse to dance or marry themselves, have no business with the partners or wives of their neighbours.”

“But they are such very different things!”

“–That you think they cannot be compared together.”

“To be sure not. People that marry can never part, but must go and keep house together. People that dance, only stand opposite each other in a long room for half an hour.”

Ah, our dear Catherine…not the sharpest tack in the room, perhaps…

Someone at the ball implied that, in the day, folks who chose not to dance were likely to be thought physically infirm and unmarriageable… Which of course made me think of Mr. Darcy and Mr. Knightley, two gentleman who weren’t great fans of stepping out.

So, questions for today (answer any or all):

1) Was Mr. Knightley (or Darcy) nursing some infirmity in his old age? Will Emma (or Elizabeth) find her husband sadly arthritic?

2) Was Catherine Moreland really that stupid? If so, why did Tilney marry her?

3) Do you think the English language was prettier when we added random “E”s to things, and liked to “goe foure, turne, leade againe”?

4) What do you think of English Country Dance?

Cara
author of MY LADY GAMESTER, whiche is fulle of lazy folkes who prefer sittinge and playinge cards to leapinge aboute

Cara, is that you in the navy blue gown? And if not, pictures, pictures!!

1. I do think that Mr. Darcy might suffer from a severe crick (sp?) in the neck in old age: a problem with the cervical vertebrae.

2. I like Catherine. While she may not be witty and colorful, she made some rather pointed and accurate remarks.

3. English has never been, nor will it ever be, a pretty language, to look at or to hear. But it’s the best I have, so I make do, with a ton of aggravation, no matter how much spellings change.

1. I think Mr. Darcy and Mr. Knightly may agree with Mr. Tilney about dancing being like marriage. They dance when they find the right partner, though.

2. Perhaps Mr. Tilney did not want a wife who could outsmart him, like a Lizzie Bennett could do.

3. What’s an e here and there, among friends.

4. When Ammanda and I were in England (god, don’t you tire of hearing that?) someone compared the dance to symmetry in design popular in the 18th century. Thinking of dance as creating a pretty pattern suddenly made all the marching around make sense.

1) I don’t think Mr. Darcy or Mr. Knightley suffered from anything but a reluctance to be hunted as husbands. Given that they’re among the most eligible of JA’s heroes it makes sense. I expect they dance enough once happily married.

2) Not stupid, just naive. I remember being shockingly unworldly in my teens.

4) I’m coming to love English country dance. I had to miss the last class because of my banged-up toe. Fortunately it’s better now, so I’ll at least make the last lesson tomorrow. In the spring they hold a ball which I think is similar to the Playford Ball: an eclectic medley of costumes but people who are very into the dancing. We hope to go. Maybe we’ll pretend to be Mr. and Mrs. Darcy twenty years later and prove he still likes to dance even if he gets lost occasionally in the figures. 🙂

“When Ammanda and I were in England (god, don’t you tire of hearing that?)”

I swear, one of these years I am coming to CA for a Jane Austen ball

Cara, is that you in the navy blue gown?

Sorry, Keira! That blue dress was the most amazingly gorgeous and intricate Victorian outfit I’ve ever seen, and I only wish I’d been wearing it!!! I was, once again, in my pink and white flowered Regency gown. (The one with The Hem.)

And if not, pictures, pictures!!

Sorry, but I took all the photos this time, so I’m not in any of them! 🙂 But I looked rather like I do in the Jane Austen Ball picture, except I didn’t bother with my hair…

Speaking of The Hem… Two different people spontaneously came up to me and told me they liked The Hem of my dress. Two!!! And I didn’t have to pay either of them to say it.

The Hem was most flattered.

And Elena, do keep us posted about your adventures with English Country Dance! (I like the idea of you being Mrs. Darcy…)

I swear, one of these years I am coming to CA for a Jane Austen ball

Ah, The Hem. Why do I get the feeling we’re about to be subjected to a long diatribe, er, meaningful discussion of how much The Hem means to a certain some person who comments frequently here?!

Victorian Schmictorian. Nothing compares with The Hem!

One thing I appreciated about the Playford Ball, as compared to the Jane Austen Ball, was that almost everyone there was an experienced dancer, and had practiced the dances beforehand. So even though the difficulty level of the dances was quite high, they all went very smoothly, which is a very exhilirating experience.

Something I appreciate about the Jane Austen Ball, by contrast, is that it’s not all about the dancing. There’s a tea beforehand, and a lecture or other performance, and lots of amazing costumes to admire. And it is more welcoming to beginners, so there are usually lots of fresh faces, and some easy dances aimed at them.

I don’t know if Darcy and Knightley were arthritic; but I do know that after four hours at the Playford Ball, plus two-and-a-half hours of dance practice earlier in the day, I was feeling more than a little arthritic. 🙂

Ah, The Hem. Why do I get the feeling we’re about to be subjected to a long diatribe, er, meaningful discussion of how much The Hem means to a certain some person who comments frequently here?!

Really, I find these cryptic references baffling, Keira. Whatever do you mean?

However, since the subject of the hem has been raised…[significant pause]…I thought it looked delightful, and was worth every moment of soul-torturing agony.

Perhaps Darcy and Knightly suffered from some arthritic affliction BEFORE they got old, thus their reluctance to dance. Hey, it is just a theory. Most Englishmen were looking for “dumb” to marry as it made their lives easier. I love British English so bring on the e’s and the u’s and anything else you want. I am SO jealous, Cara, that you have access to these great research tools like the Playford Ball. I would love to attend something like that and learn English country dance.

1) Was Mr. Knightley (or Darcy) nursing some infirmity in his old age? Will Emma (or Elizabeth) find her husband sadly arthritic? Nah, they lived and danced until they were 100. 🙂

2) Was Catherine Moreland really that stupid? If so, why did Tilney marry her? In a way, but I think she grew up pretty darn fast. 🙂

3) Do you think the English language was prettier when we added random “E”s to things, and liked to “goe foure, turne, leade againe”? Hmm. . . it looks too weird to me, since I’m so very used to no extra e’s. 🙂

4) What do you think of English Country Dance? Too scary to try for myself!!! LOLOLOL

If I remember Northanger Abbey correctly, Tilney says why he married – or at least feel for – Catherine – he thought he was the only reason she ever had a serious thought in her head.

Todd said, “However, since the subject of the hem has been raised…[significant pause]…I thought it looked delightful, and was worth every moment of soul-torturing agony.”

Ordinarily, my dear Keira, I would say no. But I hear that if I behave myself, we are to have peetsa for dinner tonight, and I do love peetsa.

So, O Todd one, consider yourself suitably ovated.

(By the by, I prefer pepper-roni on mine.)

I trust the peetsa was to your satisfaction. You may go back to your usual mode of uninterested (but exquisite) languor.