What an absolutely delightful garden party you throw, my dears! So pleased to be invited.

Oh, er, yes, well. Perhaps we should introduce ourselves. Regina Scott and Marissa Doyle here. We write stories about charming young heroines finding true love and their place in the world with no on-screen sex but plenty of sizzle. Traditional Regencies, you say? Oh, no, darlings!

We write Young Adult romances, affectionately known as YA. 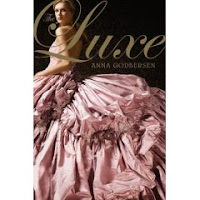 No, truly we do. Believe it or not, teens want to read historical fiction. Libba Bray’s A Great and Terrible Beauty trilogy has been very popular, and Anna Godbersen’s The Luxe, set in 19th century Manhattan, has generated Prinny-sized buzz. The divine Meg Cabot even wrote 2 Regencies for Avon’s now-defunct YA line: Nicola and the Viscount and Victoria and the Rogue.

For teens, historical fiction can have the same allure as fantasy, also hugely popular right now. Both feature exotic settings, intriguing people, and legendary customs. And gorgeous clothes, of course.

Hm. Intrigue, legend, and clothes. Who wouldn’t want to read these books!

To reach out to teens and those of us who nourish our inner teen, we started a blog, Nineteenteen where we have fun talking about many aspects of teen life in the 19th century. Music, clothes, language, roller coasters, it’s all lots of fun. 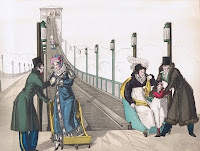 Yes, roller coasters! You simply had to be there.

How did we embark on such a course? Regina took the plunge after realizing all her previous books had the theme of finding one’s place in the world, which translates well to YA. Her first YA, La Petite Four, which will make its debut in July 2008, features 4 friends making their debut in London Society in 1815 and suddenly running afoul of a handsome young lord who just may have more up his sleeve than a well-muscled arm. Marissa didn’t even realize she was writing a YA story until a contest judge told her that her book, A Bewitching Season, would make a great YA. After picking her jaw up off the ground she hasn’t looked back! Bewitching Season is coming from Henry Holt in April 2008. It’s set in 1837, but she hopes Regency purists will be willing to hold their noses and have fun with her twins Persephone and Penelope, who rescue Princess Victoria from an evil scheme to control the Crown.

That’s all part of the fun of writing YA! Adventure and romance mix with history, humor, and all that teenage angst. So, if you were a teen in Regency England, what would you do? Dance at Almack’s? Race a gentleman through Hyde Park? Or play it safe, dress in white, and speak only to the nice young men your charming mother picked out for you???

Be sure and visit Regina and Marissa at nineteenteen, and check here at Risky Regencies in a few months for more on these exciting new books! 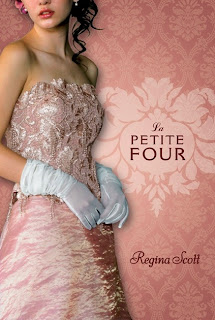 Welcome, Regina and Marissa! and thank you both for grooming our young readers to love Regency Romance!
I gotta run but I’ll be back for a more proper hi.

It’s so great to “see” you both here! I’m looking forward to these books very much, and I MUST find a dress like the one on Regina’s cover for RWA. 🙂

It brings back fond memories of my beloved Sunfire books, which I read when I was a (very early) teen (Victoria, Sabrina, Elizabeth, etc). They were also all about young women finding their way in the world. They helped kindle my love of historical romance, along with Heyer and Cartland, and I’m so glad to see you’re also bringing us new, young readers. 🙂

Woo-hoo! Both those books sound great, and I really like your reasoning for writing YA–I started reading Regencies when I was about 11, right around the same time I discovered Seventeen Magazine, so it makes sense.

So–how do you figure out what writing voice to use so you sound authentic both to the period and to the YA readers?

What a wonderful idea! I especially like the Divine Ms. G’s idea of you two grooming readers to love Regency Romance. I cannot wait to read these.My BFF writes contemporary YA called lad lit because it is from the boys’ point of view. I will send her to your site posthaste!

Regina, a big hello to you from the northwestern part of our state. I loved your RITA dress (hope you got the photos), and I have serious serious cover envy over that pink dress. Ammanda, how utterly gorgeous is that??? My daughter is ooohing and aahing.

Welcome ladies! I’ve enjoyed your Regency trads, Ms. Scott, and can’t wait to read your YA books. My daughter is rabid reader and I am always on the look out for appropriate reading for her as she is almost 11 years old.

Is the transision from Regency trads to YA writing a natural one? Did you find yourself holding back in any of the writing? How bold do you dare go given the ‘sophistication’ of today’s YA reader?

I can’t wait to get my hands on your both your books in the new year.

Santa
Off to mark her calender

Thanks, all, for the warm welcome! Diane, I do hope the young ladies read these and want more! Amanda–I saw the dress first!

Megan, on writing voice, I’ll let Marissa answer for herself. For me, it wasn’t that hard. I’d written a number of secondary characters who were teens, so moving one (or four in my case!) up to center stage wasn’t a stretch. That’s one of the reasons I jumped into YA–when my agent first mentioned it, the light bulb went on. It was a natural fit for me, in theme, in voice, in the fact that I tend to write with a touch of wry humor (she said humbly). I did have to make some word choices such as the decision to use contractions more often, but that was about it.

Phew, long post! I’ll answer the other questions in another.

Doglady, tell your friend to come on down! The more the merrier!

Kiera, baby! Thanks for the pics! I still remember us slurping up that delicious mousse at the RWA National Conference while everyone else was standing in line for carrot cake. Our own personal Room of Requirement, or Dessert of Requirement, as it were. 🙂

Santa, thanks so much for your kind words! Yes, the transition was natural to me, as I mentioned to Megan. I’ve always been one to close the bedroom door (after leading you there panting, of course), so knowing my publisher didn’t expect or want on-camera lovescenes was a huge relief. And my hero and heroine have some big class differences to overcome (she’s the daughter of a duke, he’s the youngest of the Bow Street Runners), so it wouldn’t have been natural to pile on the romance anyway. The only thing that surprised me was that my publisher didn’t want anything less than pretty. In one dark scene in a pretty bad part of town, I mentioned my heroine noticing sewage in the gutter. My editor asked me to cut the sewage. In other places, my heroine (who’s a bit of a Goth girl or the Regency equivalent) used less-than-flattering comparisons, and those had to go too. On the other hand, there’s a mystery underlying this romp that’s a bit dark, and they were all for that! Go figure!

Anyway, writing the book was a blast, and I hope my readers have an even better time reading it!

Hi, Regina,
How interesting that your editor cut the sewage! I would think teenagers would love that detail.

I’m so glad you found a happy fit in YA. I peeked at the blog and loved it.

The dress is bound to attract readers as well as those who would fight over it.

The Luxe book was in a big NYTimes Book Review ad last week–it’s going to be HUGE!!

And your books are too, Regina and Marissa! I can’t wait to read them.

Hi Riskies! Thank you so much for inviting us to play here! 🙂

Re voice–My choice was to go for a melange as far as being “period” and being YA friendly–breezier, more colloquial grammatical structures (without overt modernisms, however) in dialogue but period-correct vocabulary. It was actually a pretty comfortable voice to write in, and one that has translated well to a YA with a fantasy setting that I’m currently working on.

Santa (or is that Mrs. Santa? 🙂 ),
“Holding back” when writing YA is punishable by having your book thrown across the room by a disgusted teen reader. Madeleine L’Engle said something brilliant that applies here: “You have to write the book that wants to be written. And if the book will be too difficult for grown-ups, then you write it for children.” YA readers are amazing, wonderful, fearless readers, and holding back in anything is doing them a huge disservice.

Sarah–My ARCs arrive tomorrow at long last! I expect I’ll start to blubber like a baby when the FedEx truck pulls up my driveway. And we hope The Luxe is a huge hit–it’ll prove that young adult readers can love historicals too!

Marissa, even though I’m wed to the Regency I think your Bewitching Season sounds wonderful. I can just imagine your young heroines helping an equally young Victoria. What a great idea!

Hi Regina–don’t know if you remember me from the RWA conferences in Washington and NYC. There as Cara’s stalwart helpmeet, or something like that. 🙂 (Though now that I think about it, perhaps it was not you, but an uncannily similar man, Sir Reginald, that I met.) And Marissa, another welcome from a frequent commenter on Risky Regencies.

Your books sound delightful–I still read YA books from time to time. After all, I am an adult, and I plan to remain young until approximately retirement age.

As I’ve said elsewhere, Regina, I LOVE your cover! (It bears repeating, so I am!)

If I were a Regency teen, I’d be a rabid bluestocking. I’d give puffed up gentleman stinging setdowns and show up their shoddy Greek and Latin. Then young, handsome peers who just happen to be Shakespearean/Ovid scholars would all fall at my dainty feet. 🙂

So glad you and Regina are here, and I will see you next Spring in NE!

Thanks for talking to us, Regina and Marissa and like everyone else here, I applaud what you’re doing. I know several young readers who I think will love your books. 🙂

Todd–yes indeed I remember you! I don’t think any of us who saw you and Cara waltz will ever forget it. What a treat! Then of course there was that interesting business about the OP riots!

And Sir Reginald says hello as well. Always delighted to chat with a dapper chap such as yourself.

Hi, Elena!!! Hope to see you at an RWA conference again soon!

I love YA and can’t wait to see it mixed with the regency. Should be fun!

Todd–yes indeed I remember you! I don’t think any of us who saw you and Cara waltz will ever forget it. What a treat! Then of course there was that interesting business about the OP riots!

I’m so glad you remember the waltz! As I recall, my thoughts at the time were something like: “Don’t trip…don’t step on Cara’s foot…don’t trip…what’s the next figure?!”

And to Sir Reginald…your obt. svt.