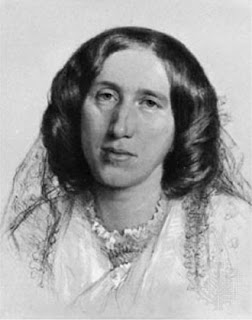 Yes, it’s Thanksgiving and it’s also the birthday of George Eliot (born 1819), to whom I would like to give thanks today. Highly literate and educated despite being born into the sort of provincial society she depicts in her novels, she left England at the age of thirty after the death of her parents and traveled in Europe, returning to become a writer for the Westminster Review. Her life was unconventional (she lived out of wedlock with a married man, George Henry Lewes, for years–as she grew in fame and fortune Victorian society accepted the liaison. After Lewes’ death she married a man twenty years her junior; go, girl. And she earned a living as a writer, “coming out” as George Eliot, a name she adopted early in her career.). Interestingly Eliot’s books rarely turn up on lists of “my favorite romance novels” in the company of Pride and Prejudice and Jane Eyre.

Why? Here’s a reason, in her own words:

Marriage, which has been the bourne of so many narratives, is still a great beginning, as it was to Adam and Eve, who kept their honeymoon in Eden, but had their first little one among the thorns and thistles of the wilderness. It is still the beginning of the home epic – the gradual conquest or irremediable loss of that complete union which makes the advancing years as a climax, and age the harvest of sweet memories in common. 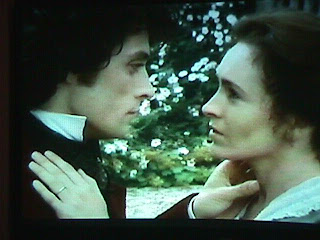 Consider Middlemarch, possibly her greatest work, where the emphasis is on the community itself and the burgeoning romances are only part of the big picture. She subverts the marriage of true minds–Lydgate and Dorothea, two peas in a pod of innocence and idealism–and instead pairs them with partners who, in Lydgate’s case, are far their inferior. And Dorothea and Rufus Sewell, oops, Will Ladislaw–well, I can only conclude that he’s great in the sack and has the right sort of politics, certainly nothing to turn up one’s nose at, yet I digress–I’m left feeling that she sacrifices herself to romance. And I certainly think Mary Garth could have done better than Fred Vincy. Of course Eliot was smart enough to know that if she paired up Lydgate and Dorothea, there would be no book; that the troubling and imperfect relationships and their uncertain outcomes makes the book a brilliant masterpiece. 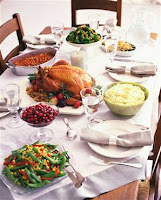 Now I love Daniel Deronda for similar reasons–the relationships aren’t what you think they’re going to be–and there’s no overt happy ending but a huge amount of interwoven complexity. She took the risk of trying to write about a truly good hero–Daniel, making a journey of discovery into his origins, forging his own destiny–and even she couldn’t quite do it. Daniel is really only interesting when he’s suffering, upon rare occasions, some sort of negative feelings–when he acknowledges his own snobbishness in becoming associated with a family of Jewish shopkeepers (oh, the vulgarity! How embarrassingly materialistic they are!). So Daniel is the turkey at the Thanksgiving dinner, handsome to look at, but a bit bland and occasionally dry. The rest of the book–the gravy and yams and cranberries and the rest of the delicious accompaniments, the fabulous secondary characters and their love interests and concerns–is Eliot’s unconventional triumph.

Have a great Thanksgiving, everyone.

Give thanks every month when you receive the Riskies newsletter. Sign up now at riskies@yahoo.com