Confession: for the last two days, I’ve been sitting around eating turkey and pie, not getting any exercise, and watching Deadwood DVDs. So, for this Saturday’s post I knew I had to find something where I could use lots of pictures. Something that wouldn’t take much brain-power, since I lost that a few slices of apple pie a la mode ago. Something that grows out of last week’s post. Something with–corsets! Yes! That’s what I need after mashed potatoes and gravy. Elizabethan Costuming 101.

The Smock A basic garment, worn by all classes to help protect outer clothing. There are various styles–some are cut close to the body with a low, square neck and close-fitting, ungathered sleeves. Some have puffed sleeves gathered to cuffs. Generally made of linen.

Partlet A rectangular fill-in for the open-necked bodice. If a smock with a low, square neck is worn, this can go over it. It’s cut with a straight, standing collar, and can have a small ruff attached, or have a larger ruff pinned or basted to it.

Stockings These came to just above the knee, could be made of wool or fine silk yarn, tied by a ribbon garter.

Corset (or Stays, or Pair of Bodies) The Elizabethan corset, unlike the Victorian, is not designed to squeeze the waist to Scarlett O’Hara proportions, but to smooth the line of the torso into a cone shape and flatten the bosom into a high, mounded bustline. Made of heavy boning, generally with back lacing. Extant examples are very rare; this pic is a German corset from around 1598.

Farthingales There are 2 popular varieties: Spanish and French. The Spanish is the most flattering, a straight A-line angle from waist to hem. The French, or drum farthingale, is a large, crescent-shaped pad or rigid framework worn around the waist. This was the fashion later in the 16th century.

Bum roll A crescent-shaped pad worn around the waist, supporting most of the weight of the skirt.

Drawers Not generally worn by Englishwomen. Queen Elizabeth had a few Italian pairs, but they were a shocking, racy rarity.

Underskirt (or kirtle) with a decorated forepart A plain skirt, gored or pleated to fit over hoops, bum rolls, etc. The forepart is decorated, embroidered or made from fancy fabric, and it lies flat in a gentle, downward arc. Over this goes the overskirt, attached to the bodice to form the gown. The overskirt is split up the front. Two common styles of bodice are the square-necked variety and the doublet (with standing collar, fastened down the front center. See the portrait of Mary Queen of Scots on the right).

Sleeves detachable, could match the bodice fabric or could be contrasting (sleeves were often used as a fairly easy way to try out new looks)

Surcoats were a popular loose, coat-like garment, either worn over the bodice and skirt for warmth or on their own over the undergarments. (See the portrait of Christina, Duchess of Milan, in black).

Queen Elizabeth’s Wardrobe Unlocked by Janet Arnold (this book is one of the great Prides of my book collection! One of the most valuable both in terms of money and information. Also check out her two volumes of Patterns of Fashion)

The Tudor Tailor by Ninya Mikhaila

And a few pics of my own costumes (match to the inspiration! The silver gown isn’t actually mine, though I wish it was–it belongs to the Folger Shakespeare Library) 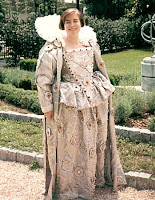 I hope everyone had a great holiday! I think it may be time for me to get up off the couch before I need a corset and bum roll, too…

I cannot imagine wearing clothes like that! (which is why I write in the Regency era, perhaps).

Amanda, your costumes are wonderful. But how in the world did you wind up wearing a costume from the Folger?

I have a friend who used to work at the Folger, and we spent a wonderful afternoon a few years ago digging through their costume and prop stores! The photo in the black gown (which is my own dress) was also taken at the Folger, when I got to play “lady in waiting to the Queen” for Shakespeare’s Birthday. 🙂

Ammanda you sure are cute in your outfits. I had no idea you had so much hands-on experience even with this time period.

So: Regency clothes or Tudor? 🙂

Kalen Hughes tells me that corsets are very comfortable and supportive. Anything compresses my chest and squashes my stomach would not fall under “comfortable,” but I’ll defer to experts, such as you Ammanda and Kalen.

No, I don’t anticipate a need for a bum roll in this life. Hopefully, the next one. 🙂

I got tired just reading about all that stuff, I can’t imagine having to wear it all. I mean when do start getting dressed for an event – 2pm?

You look marvelous in your costumes. You know how to have a good time!

Wow, what a lot of information! And thanks for posting the photos of yourself in the different costumes–they are fantastic!

I never went in that much for Elizabethan costume…the ruffs, and the pumpkin breeches, and all that, just looked very uncomfortable. 🙂

“So: Regency clothes or Tudor?”

Well, the Regency gowns are certainly more comfortable and easier to move in! I wear Empire waists quite a bit in everyday life. But since I’m short and a bit, er, round, with short legs, I like the shape an early Elizabethan or 18th century, pre-Regency gown can give. 🙂