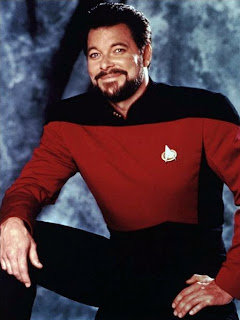 As had happened before, Mr. Data attempted to amuse his fellow officers on the bridge with what he took to be a well-timed joke.

And, as had also happened before, and too many times to count (unless one has a positronic brain), Commander Riker grinned in a way which seemed to say, he was not so much amused by Mr. Data’s wit, as he was by his epigrammatic clumsiness.

“I see what you think of me,” Data told Riker gravely–“I shall make but a poor figure in your log to-morrow. I know exactly what you will say: Commander’s Log, Star Date 47457.1; Mr. Data embarked upon another jocular assay, to little effect.”

“Indeed I shall say no such thing.”

“My dear sir,” said Data, “I am not so ignorant of the ways of human beings as you wish to believe me; it is the human habit of recording such unimportant and clearly 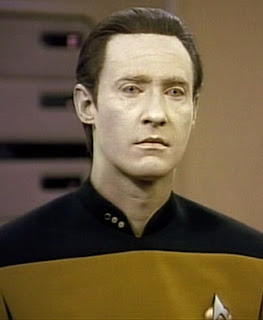 biased information in Starfleet logs which accounts for the easy style of speaking for which your species are so generally celebrated.”

Mr. Riker shrugged his shoulders with a modest grin. “I should not think the superiority was always on our side.”

“As far as I have had the opportunity of judging, Mr. Riker, it appears to me that your own style of speech is faultless, except in three areas.”

“And what are they?”

“A general deficiency of subject, a total inattention to sense, and a very frequent ignorance of grammar.”

“Upon my word! I need not have been afraid of disclaiming the compliment. You do not think too highly of me in that way. Very well, now that you are in a mood to tell me my flaws, do not hold yourself back: how do you feel about my appearance?” And his grin seemed to say that, whatever faults Mr. Data might find in his speech, in the matter of comeliness, even the most emotionless android must concede William Riker’s superiority.

“It is very clear to me,” said Data, gravely examining Mr. Riker’s face, upon which a beard had abruptly appeared the day before, “that I am but a poor judge of such quintessentially human matters. Else I might declare that your chin resembles nothing so much as a well-used breeding ground for tribbles.”

For earlier installments of Austen Trek (which NBC would have cancelled after season two, had they known of it), just click on the link below which says “austen trek”…

And be sure to join us next Tuesday, December 4, when our Jane Austen Movie Club discusses the most recent version of Pride and Prejudice, a.k.a. the one with Keira Knightley and Matthew Macfadyen.

Cara
Cara King, who finds Data’s inability to use contractions to be as baffling as Catherine Tilney’s complete cluelessness

well used breeding ground for tribbles — Ah, Data was so right, but centuries removed. THose Vikings and other medieval men should had wild life in their unkempt hair and beads.

You always have something vastly beyond my imagination in this section. Very cool!!

Ooh, I loved it! And we get a great big picture of Commander Riker too!!! 🙂 Double the pleasure and all that stuff!

Lois, who know has a craving for gum. 😉

Cara, you are an amazing talent! I’m in awe.

Diane (who can recite part of the Trouble with Tribbles episode–“Who put the Tribbles in the quadratriticaylie?” –or however you spell it!)

Lois, great joke about the gum. I can still those green-n-white twins.

I love you Jane Austen Star Trek. I’m such a nerd, I think the Data picture is hunkier.

I’m such a nerd, I think the Data picture is hunkier.

I guess that proves that tastes really do vary, Georgie! I’d love to have Data over for dinner, and I wouldn’t mind him living in my attic, but if I were to date someone, I’d prefer Picard or Riker. 🙂

Are you a Spock fancier too, by any chance?

I’d love to have Data over for dinner, and I wouldn’t mind him living in my attic, but if I were to date someone, I’d prefer Picard or Riker. 🙂

Oh! Does that mean it’s OK for me to start using contractions again?

BTW, I’m not sure it’s a good idea to have Data live in the attic–he’d have to share with Bertie, and that could easily get out of hand. And he might turn evil and take over the house…

Todd asked, “Does that mean it’s OK for me to start using contractions again?”

I DO NOT ever want to have contractions again. Conniptions, yes, contractions, no. Y’know? 🙂