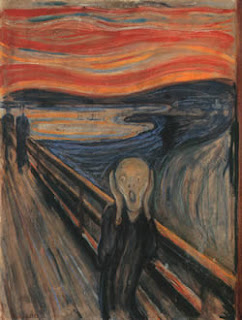 Murphy’s Law is playing havoc with me this month. Besides the head cold and the bunged up toe I mentioned earlier, I now now have another injury. On Thanksgiving Day I waged battle with a maple sapling that had the temerity to spring up 6 inches from the house and hyperextended my elbow. Ouch! On the National Novel Writing Month front, I have 39,000 words, so if I want to reach the goal, I need to write 11,000 more by Friday night. And holiday activities are ramping up. Sigh…

I am so fried that only my trusty To Do List saved me from missing my Wednesday blog post. I don’t know what I’d do without my list. I started doing really elaborate day-by-day To Do Lists a few years ago when I realized my short term memory, never particularly good, was totally GONE. 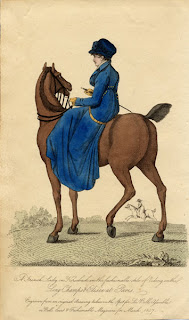 My To Do List is depressingly mundane, including such exciting items as “buy fish food” and “clean vaporizers”. Occasionally I try to add something more interesting, like “try out Shrimp Pad Thai recipe”. Still lame, I know!

I’d rather think about what my To Do List would be like if I were a Regency heroine in her HEA.

It might include “Ride through the countryside on my well-bred hack.” 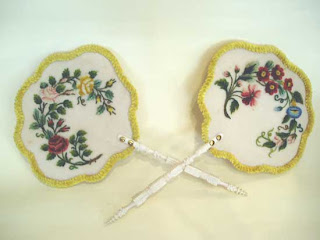 If the weather was not cooperating, maybe it would be “embroider some pretty face screens”. (I wouldn’t be one of those heroines who despise needlework–I truly do enjoy it.) 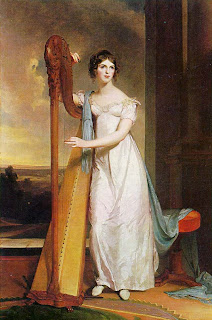 Or maybe “practice the harp”. (OK, I don’t know how to play the harp but I definitely would if I lived during the Regency. While we’re fantasizing, I’d also be as slim as the lady depicted here.) 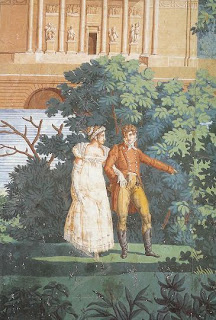 Or perhaps, “walk with my husband on our extensive grounds”. (‘Walk’ being a euphemism for benefit of any servant who might catch sight of my list. Not that the servants wouldn’t guess but they would be so very well-trained as to never, ever intrude.)

So before we head back to harsh reality…

Have you ever had a Calamity Jane month?

Is there anything interesting on your To Do List?

What would be on there if you lived in the Regency?

And do you think I have a prayer of reaching 50,000 words by midnight Friday???

I have just had one of those days you describe: I’ve been staying up too late, so I lay down for a wee nap. Set the alarm, and everything. Kept hitting snooze, and here I am, an hour and a half later, having wasted precious no-son time on sleep.

I would def. be one of those ‘hate needlework’ ladies. I would have lists of letters to write, ribbons to buy, and people to give the cut direct.

Yes, Elena, I’m sure you can make it! You will get a surge of determination which will carry you through… The force is with you… I’ll send Bertie over to help run errands while you write…

(Okay, maybe that last one isn’t a good idea… Bertie is like a five-year-old helping out: it would be quicker to do it yourself.)

I have every confidence! After all, writing 50,000 words is really no different than writing a single word, except repeated 50,000 times.

I wouldn’t say this month has been totally terrible, but I got sick on Monday which has made the last couple of days pretty unpleasant. First time I’ve had to miss work due to illness in five years…

and during the Regency period, I imagine I would have waaaaaaaaaaaay more time to read than I do now! (although I wouldn’t have to books that I have to read, but that’s besides the point.) 😉

Thanks for the vote of confidence, everyone. I reached nearly 43,000 today so maybe I’ll pull it off. I don’t know why it’s so important to me–just pride, I guess!

Thanks for the offer of Bertie, Cara. But I think I’ll manage. 🙂

I have every confidence! After all, writing 50,000 words is really no different than writing a single word, except repeated 50,000 times.

LOL, Todd! Maybe I’ll try that. It could be a whole new literary form. 🙂

Lois, they do count the small words. In standard manuscript format you get about 250 per page so 50,000 words translates to about 200 pages.

Love everyone’s Regency To Do Lists!

Run, Elena, run (There was a German movie that was hugely popular in Seattle in the 90s called Run Lola Run.

Ammanda, add Target on your To Do list, because right now, they’re showcasing a ton of Hello Kitty cute stuff.

On my Regency to-do list would have books to read, correspodence, morning calls, circulation library and bookshop trips (while the women visit the modist/milliner/mantuamaker). This would be in addition to some sort of daily “job.” Haven’t figured out what that would be yet.

Since I would be a lady of leisure during the Regency period, I would have a very short list. Wake up at noon, nuncheon, receive callers, purchase that brooch I saw last week on Bond Street and put it on my husband’s account, get ready for the ball, attend the ball, wake up at noon the next day.

I think I’ll to take a nap before I get ready for that ball.

Sure you can, jus’ wri’ mo! Don’t give editing or tangents a thought. Good luck! And remember to give your wrists a break on Saturday.

I love your Regency to-do list, especially number one!

I’m glad my November is almost over. I had to polish my GH entry and, erherm, finish the last 80 pages of manuscript before mailing.

I’m on a fundraising committee.

We got 4 new clients at my day job, I’m super-busy-overloaded, and I keep getting the feeling my manager wants to get rid of me. Oh, and I cooked turkey dinner for my husband’s tribe. AND it was my son’s 16th birthday last weekend.

Everyone at the day job is ill. Now I’m working on not catching it!