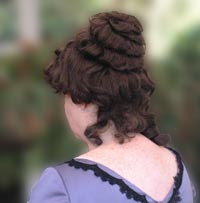 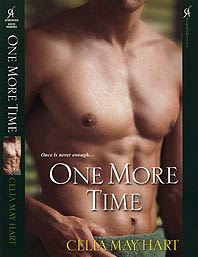 Welcome, Celia May! Tell us about One More Time. What inspired this book? And was it an easy or a difficult book to write?

One More Time is about a modern-day heroine, Abby, who is flying herself to her new job as a hotel manager in the English countryside. She ends up landing in Regency-era England instead. She meets our hero, Myles, who is looking for a fabled statue that will get him entrance into the Dilettanti Society. Given that they have no clue how to get back to her own time, she helps him look for the statue, and shares the goodies she brought with her from the future (specifically, sex toys)

As for inspiration, I was pitching ideas for my next contract and nothing was grabbing my editor so I started getting outlandish. I sent off the idea of a time traveling heroine who hooks up with a charming adventurer and oh, by the way, a Greek god comes to life, and sent it off, thinking she’d never go for it.

She went for it. So I had to figure out in a little more detail how it was going to work. I had the beginning sorted out (I usually do) but figuring out what to do with Greek god was the hardest thing about this book to write. It ended up being a hard book to write, despite the easy start!

What advantages did writing a modern heroine in Regency times give you, as an author? And what new things did it let you play with?

I love time travel. I love the whole fish out of water aspect. And for the majority of the book, Abby has to conceal her true self in order to fit in. Although, she’s not particularly good at it. I loved doing the mix of modern and Regency-speak, and I think one of my favorite scenes is early on when Myles is trying to figure out the zipper.

What do you think is the greatest creative risk you’ve taken in this book?

Throwing in so many different elements. I spent most of the time writing the book calling it “The Kitchen Sink” because it seemed to me it had everything but the kitchen sink in there. And it was the first time I’d done more than a simple time travel story. This has some big paranormal elements in it, and working them in and describing them without, you know, data dumping, was a challenge.

One More Time includes an appearance by some characters from one of your earlier books. Did you find it easy to blend them into the new story? Or did you find that some scolding was necessary? 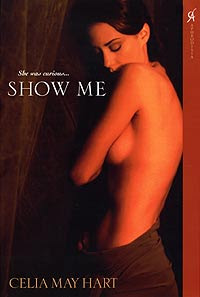 They wanted to come to the party. I checked with my editor if that was okay, and it was, so I let them loose and we had a lot of fun. I gained a better understanding of the Duke too. The Wintertons first appear in Show Me, and this is set after that.

Is there anything you wanted to include in the book that you (or your CPs or editor) felt was too controversial and left out?

Nope. Did I mention it was the Kitchen Sink book? Aphrodisia has some guidelines (similar to those of Ellora’s Cave), but other than that, we can do whatever we want.

Is there anything that any of the above wanted you to cut, that you decided to keep instead?

I don’t have a critique group and I never heard bo-peep from my editor when she got the book. I did restore some things from the copy-editor, but that’s par for the course and is minor stuff. (And actually, I think the copy-editor might’ve been right about something… Too late now!)

What is it about the Regency that makes it such a great setting?

It’s a time of transition — between racy Georgian to repressed Victorians; everybody looked good in their clothing (well, at least until the 1820’s) and there’s just this sense of adventure — a sense I picked up from Georgette Heyer and the characters of Horatio Hornblower and Sharpe. 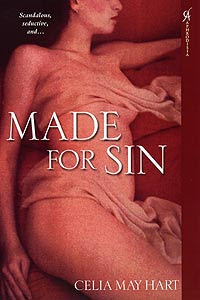 Did you come across anything new or interesting when you were researching the book?

My editor recommended that I read “The Pleasure of the Imagination: English Culture in the Eighteenth Century” by John Brewer, and it’s a fascinating read. I learned about the Dilettanti Society in there, but I also learned how folks viewed art of all kinds. A mention of the Dilettanti Society got into the book. The rest, well, I love history, so it’s currently living in my subconscious somewhere, I’m sure.

Is there anything else you’d like the Risky Regencies readers to know about you?

I am doing a booksigning this Friday (December 7). If anyone’s in the SoCal area,
you’re more than welcome to come visit! (click here for info)

Thanks for having me!

Be sure to comment for a chance to win a copy of Celia’s earlier release, Show Me!

Hey, Celia! What a great interview. It sounds like you write a little bit of everything. Your latest book must be fascinating. A Greek god? Where do I sign up?!! *g*

I’m dying to know how Abby explains her plane to Regency folk! Like you, I love time travel because it takes a person comfortable with their life and plunges them into an alien society, and then we get to watch them go through denial, then horror, then acceptance, and finally, trying to fit in. I can only imagine what Abby must have gone through when she lands her plane and realizes she’s traveled back in time approximately 200 years!

Time travel with sex toys sounds about right. Someone should start a modern Dilettanti Society. Hope we’re all qualified to be members.

This sounds like a perfect read. I too have a kitchen sink book sitting on an editor’s desk, and hope your success will carry over to me! I’ve written a couple of “histemporal” things which have been a lot of fun.

Thanks for a great interview! The Regency-era never stops to fascinate me.I mostly read paranormals, and to link time travelling with Regency is just great!!
Excuse me for asking but what is a “kitchen sink book”?

Hello, Celia! You have some great covers. I especially like the one on One More Time. Neat idea for a story and a hero with a rock hard body. Yum! It sounds great!

OMG, time travel, regency, sex toys And a Greek god?!!!!!
That sounds like a wonderful story! I just gotta have it!!!

Hey, I happen to like the kitchen sink! At least when it comes to books. When it comes to actually using it to do dishes – fuggetaboutit! As I am a huge fan of the Regency period and I am all for a good paranormal this sounds like a great read. I love that you couldn’t please your editor so you just went a little nuts and came up with this. Sometimes I think that is how the best ideas are born.

Thanks for joining us!

What sex toys were extant during the Regency?

What sex toys were extant during the Regency?

I think the point was that the heroine brought some back with her! Though for all I know, she discovers Regency ones too… 🙂

Welcome, Celia May! So, what do you think of your covers? (I love talking about covers, and I love finding out what authors think about their covers.)

No, i know she brought them, I was just wondering if there were any the hero was already familiar with.

Good question? What sex toys were around during the Regency period?
What especially caught my attention beyond the coming-to-life god, was the zipper — yeah, how do you explain that one? It’s not like you can unlace, unhook or unbutton the durn thing.

No, i know she brought them, I was just wondering if there were any the hero was already familiar with.

Celia,
This sounds like such a fun book! I love time travel stories, too. It feeds my fantasy about magically traveling back to the Regency.
Wouldn’t hurt to encounter a hero like on your cover, either.

Sherrie — well, you have to read the book to find out what happens to the plane…

Cara — love my covers? I mean, how could you not? ONE MORE TIME is just plain *hot* and the others have this beautiful sensual quality. Cannot complain!

Savanna — for the zipper scene — well, you’ll just have to read ONE MORE TIME!

I’ve had a love of science fiction and erotica genres, but I never thought I’d have the opportunity to combine the two. Brilliant!

I cracked up when I read the part about the hero being fascinated with battery operated toys. TOO funny. Men in any age are intrigued by gadgets! I never really thought about how odd a zipper would be to someone who has never seen one. I had a parrot who was fascinated by them. I even made a toy for him that was basically a cushion with various zippers sewn to it. Kept him happy for hours.

Sorry to be so late to the blog! I,for one, will be standing in line for this one. What’s not to love about a heroine who travels with sex toys! It looks like there’s a lovely bit of backlist to go through, too.

Congrats on making the transition from trads to erotica.

What was your pen name when you were writing trads?