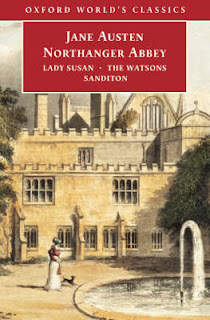 I first read this novel in college. The only Austen I’d read before was Pride and Prejudice, and I’d found it wonderfully romantic. So I picked up Northanger Abbey one day. I was expecting an emotional, swoon-worthy, and delightfully short book. (I’ve always liked short books. Does that mean I’m lazy?)

The novel wasn’t quite what I was expecting. In fact, I was initially quite disappointed. I’d wanted a smart heroine (like Lizzy Bennet) and a powerful, yummy hero (such as Darcy). 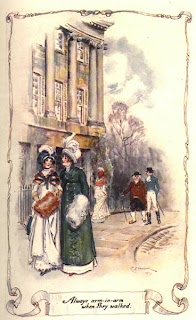 Instead, I got a staggeringly naive heroine. And, sure, naive heroines (particularly young ones) may transform themselves into impressive women, but it seemed to me that would require strength and intelligence, or at least industriousness. Catherine had no great claim to any of the three. No, her best quality was that she was, you know, nice. Pleasant. Friendly.

Tilney was a bit more attractive to my eighteen-year-old reading self, once I figured out that pretty much everything he said was a joke. But Austen refused to let me get romantic about Tilney, no matter how much I wanted to. Instead, she kept pointing out that one of the reasons he was falling for Catherine was that she quoted his opinions on art back to him:

…though to the larger and more trifling part of the [male] sex, 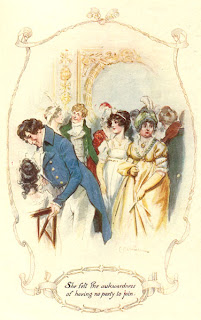 imbecility in females is a great enhancement of their personal charms, there is a portion of them too reasonable and too well informed themselves to desire any thing more in woman than ignorance.

…she soon began to see beauty in every thing admired by him, and her attention was so earnest, that he became perfectly satisfied of her having a great deal of natural taste.

And that wasn’t what I was looking for in a guy, either in literature or real life.

And yet, when The Official Risky Decision was made to blog about Austen’s novels this week, my hand went up with an “oh, can I have Northanger Abbey, please please please?”

It’s definitely one of my three favorite Austens (along with P&P and Persuasion.) And I’m pretty sure I lean toward it more than the average Austen fan. 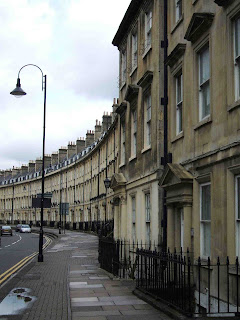 So…what changed? Why do I love it now, when I was so disappointed at the outset?

I think one of the reasons is that I (extensively) revised my expectations. I no longer pick up the novel to have a wonderful romantic adventure, or admire a heroine or swoon over a hero.

I love the humor. The bright, sparkling, silly fun of the first half of the book is just great comedy. John Thorpe, always boasting… Isabella, so transparent in how she chases men… Mrs. Allen, who wishes she had some acquaintance in Bath… Mr. Tilney, who knows to what use ladies put nine-shillings-a-yard muslin.

And, really, what a lovely existence, in that first half of the book! The worst problems are rain and a bit of boredom, but Mrs. Radcliffe can always cure that. We have country dances and country walks, carriages and cravats, flirtation and quizzes — and no work at all. Ah, yes — that’s the life I want. (Does that mean I’m lazy?) 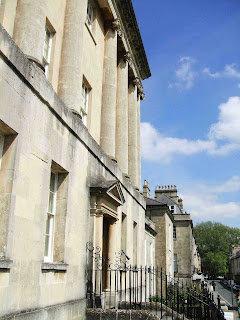 I confess, I don’t care for the second half of the book nearly as well. Sunshiny, dynamic Bath turns into dark, dreary Northanger Abbey, and most of the comic characters are gone. Tilney lectures Catherine a lot, and the ending is one of Austen’s “I’ll tell you what happened, but I won’t give it to you in a scene” resolutions, like in Mansfield Park, which I always find less than satisfying.

But for me, nothing can equal the first half of the book. I want to be in Bath with the Tilneys and Thorpes and Allens, reading Gothic novels with Catherine and promenading in the Pump Room, with the comic spirit of Sheridan and the Eighteenth Century wits infusing everyone around me.

So…how about you? What do you think of Northanger Abbey?

(And remember, on Tuesday, January 1, we’re going to discuss the BBC TV adaptation of Northanger Abbey — so be sure to stop by!)

Cara
Cara King, author of My Lady Gamester, the story of a heroine who is so industrious that she makes me want to take a nap…then again, you all know how lazy I am…

I was in my early twenties when I read Northanger Abbey for a class. The critiques and discussions that followed in the class simply furthered my belief that one part of Austen’s genius was to show that lasting love can occur in various forms: passionate (P&P), sensible and kind (S&S), and with defined gender roles and social moes (NA).

I find that Loretta Chase and Judith Ivory in particular are able to show us these different kinds rather well.

I was in for a big surpise when I read Northanger Abbey since I had read Emma and Pride and Prejudice. I found Northanger Abbey an entertaining and interesting novel filled with great satire on Gothic literature. Catherine was an innocent young woman who was endearing throughout and this serious commentary on love and marriage made for a nice change.

I read this one in my late twenties after reading most of her other works. Like you, I enjoyed the description of Bath but didn’t care for the ending. I didn’t enjoy this one as much as I did her other works.

Very interesting discussion; I have not read this book.

Oh, this is my second favorite. . . as I said in the entry of S&S, I didn’t write much down when reading them, so trying to remember. . . I loved the humor, Mr Tilney, the lightness, Mr Tilney, the parody of Gothics, Mr Tilney. . . did I mention Mr Tilney? 😉

I have always imagined that I could see Jane Austen smiling as she wrote the opening pages of Northanger Abbey. I know the opening sentence of P&P is far better known, but I love the first line of NA too. “No one who had ever seen Catherine Morland in her infancy would have supposed her born to be an heroine.” I love all the details that follow to show Catherine as an “anti-heroine.” I particularly love the narrator’s observation “But from fifteen to seventeen she was in training for a heroine; she read all such works as heroines must read to supply their memories with those quotations which are so serviceable and so soothing in the vicissitudes of their eventful lives” and the catalog of quotations from Pope, Gray, Thompson, and Shakespeare that follow these words. Even though Catherine’s journey to a knowledge of self and of life is fundamentally serious, the reader’s journey through Austen’s parody is sheer delight. Maybe NA resonates especially for those who were young readers during the golden age of Gothic romance.

I am so ashamed. I have to admit that I’ve only read NA once, long ago. You make me want to read it again, Cara!

You make me want to read it again, Cara!

I’m afraid I haven’t read that one either but it does sound very interesting.

And hey, Cara, what’s with the tag line? Bertie will vow on a stack of King James bibles (or Ackermann’s prints) that laziness and you cannot possibly occur in the same sentence together.

I have always seen this novel for what it is – a sweet tale of a girl who on the surface appears to have married somewhat up, but who in truth has rescued him from himself. I think I just see Catherine as knowing far more than we think she does and deciding what kind of marriage will work for her and making it. It might not be what someone like Lizzie or even I would choose, but it suits Catherine.

And hey, Cara, what’s with the tag line?

Well, Keira, if I like short books, and want to live a life of leisure in Bath, doesn’t that make me lazy? 🙂

Bertie will vow on a stack of King James bibles (or Ackermann’s prints) that laziness and you cannot possibly occur in the same sentence together.

Yes, but he’ll also swear that:

1) his valet is a hedgehog;

2) his great-aunt Lavinia Sophia Eugenia Kumquat sent a notice to “In Touch Weekly” announcing his engagement to Keira Knightley; and

3) William Elliott is the hero of Persuasion.

but who in truth has rescued him from himself.

How interesting! In what way, doglady?

Someone like Tilney would not have done well with someone like say Lizzie or an of a dozen similar romance novel heroines. I think he needed someone to appreciate him for what he was. Marriage, especially in the Regency could be such a “crap shoot” and I think he got lucky. She just strikes me as the type of wife who will support and admire him, smile indulgently and cosset him with her genuine sweetness. Imagine him with someone NOT like that.

I did love Catherine’s imagination!

Northhanger Abbey is one of my favorite Jane Austen books. Austen’s introduction to Catherine compelled me to read on because I kept thinking that there has to be more her than meets the eye and there was. It has a delightful cast of characters and I do like the gothic feel of the abbey and I really felt like I was walking through Bath and socializing in the Pump Room.

I am very fond of this book; I think it’s one of Jane Austen’s funniest novels, right up there with Pride and Prejudice. It’s also her most light-hearted novel, though parts of the second half (as Cara points out) are not so happy nor so funny. I like Catherine. She may not be the sharpest tool in the shed–though I think that impression stems more from ignorance of the world than lack of brains–but I do like a woman who reads. And much is excused by the fact that she is, and seems, very young.

Another reason I like Northanger Abbey is that I visited Bath not long after reading it for the first time, and saw a lot of the same places Catherine saw. I love the novel Persuasion, but I’d much rather visit the Bath of Catherine than the Bath of Anne. So some of my fondness for the novel is tied to my fondness for Bath–one of my favorite cities in all the world.

It’s a middling book for me–that is to say, in the middle of JA’s canon–but still delightful.

Ohhh…Mr. Tilney. The first metrosexual hero. A man with whom you can discuss fabrics and laundry…what’s not to love?

I LOVED Northanger Abbey. I did read it on a flight from London to the states after seeing Bath for the first time – in fact, I bought it at the Jane Austen Center in Bath – but I would have enjoyed it anywhere. It is so amazingly funny and full of amusing satire. My favorite line is still when Mr. Tilney thinks he is the only reason why Catherine ever had a serious thought. How deliciously honest. I encourage anyone who has not read NA to run out and do so. It’s my third favorite J.A. novel.

Hmm…yes. Lucy Steele or Mary Crawford would have been very bad for him…though one hopes he’d be smart enough to avoid that sort. (I’d hope! He’s my kind of guy.) 🙂

Ohhh…Mr. Tilney. The first metrosexual hero. A man with whom you can discuss fabrics and laundry…what’s not to love?

LOL, Janet! Though if one views NA as Austen’s most 18th century book (which I do), then perhaps gentlemen knowing nice fabrics doesn’t seem so surprising… 🙂

Ooh, perfect, Michelle! Whenever I’ve stayed in Bath for several days, I’ve brought along a copy to read… It is *such* a Bath book!