You heard it here. Mansfield Park is the Austen equivalent of big girl panties. 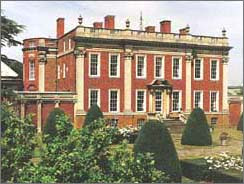 I chose Mansfield Park because I was afraid no one else would want it, and I was interested in seeing what I thought of the book decades after my last attempt at reading it. Briefly, it is the story of Fanny Price, who is raised by her wealthy relatives the Bertrams in their luxurious home Mansfield Park (thought to be based on Cottesbrooke Hall), where [i]f tenderness could ever be supposed wanting, good sense and good breeding supplied its place.

I read the Oxford University Press edition–not my first choice but the local library didn’t have a copy and I couldn’t find my collected Austen. No helpful notes or introduction, and so I was left to my own interpretation. First, I had trouble figuring out what is the book really about–it’s unlike Austen’s other works in that it covers so much ground and so many themes, and the point of view shifts frequently; I believe it’s the only one of the novels that uses multiple points of view. It’s the only one of the novels that is concerned in a major way with fashionable mores of the ton and has more titled characters, at least mentioned in passing, than you can shake a stick at.

Is it a comedy? Sort of. Mrs. Norris, the only truly funny character, isn’t that funny after a time as you realize how mean-spirited she is and as you see her fall out of favor with the powerful Sir Thomas Bertram. There’s also the stagestruck Mr. Yates who really really likes his blue dress (no, not that sort of dress) and pink satin cloak.

Is it a love story? Sort of. Edmund and Fanny slide into marriage–and the one thing I do remember from earlier readings is that these two are well matched in vapidity and longwindedness. The moral of the book?–that if you wait, all things will come to you?–Fanny must have a horse, a fire in her room, and ultimately a husband (the cousin marrying thing was not nearly as icky as you might think). That virtue is rewarded, certainly; Miss Prism (The Importance of Being Earnest), whose definition of fiction was that the good end happily and the bad unhappily, probably enjoyed Mansfield Park.

Fanny develops from the poor, sickly relative into an attractive and well read young woman, although shy and given to longwinded rhapsodies on the beauties of nature etc. (this is a book of voluble characters. Edmund, bless him, goes on for pages and pages). She and her Bertram cousins are befriended by the worldly and ambitious brother and sister Henry and Mary Crawford, and Henry becomes involved with both of Fanny’s female cousins, playing them off against each other, even though one of them is engaged. And Fanny finds herself befriending Mary, even though she isn’t really sure she likes her or approves of her, and feels pretty much the same way about Henry. 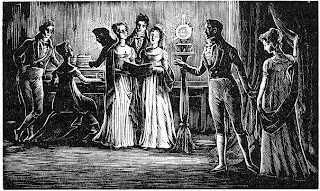 One of the early crises of the book–ending with a splendid cliffhanger at the end of Volume I–is the amateur staging of a very naughty play, Lovers’ Vows. Fanny refuses to take part; poor Edmund, in a crisis of conscience, decides it is his moral duty to take a part in the play. (I think, but I’m not sure, that you are meant to laugh here.) Much later you find out that Edmund very much enjoyed rehearsing with the fascinating Miss Crawford, with whom he’s fallen in love, even though he suspects her moral code does not match up to his. And, yes, she really does say “What gentleman among you am I to have the pleasure of making love to?”

And then Henry Crawford tells his sister that his next challenge is to make Fanny fall in love with him. 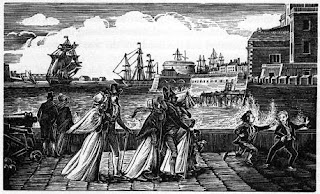 Is Austen writing her version of Les Liaisons Dangereuses? Certainly Crawford, short, dark, flirty, and keen on farming as well as women, is no Valmont. Henry arranges for a promotion for Fanny’s midshipman brother and even wrenches good behavior out of her uncouth family in Portsmouth. But Fanny holds firm–she won’t marry a man she doesn’t love, however persuasive he, his sister, and her own relatives are in gently blackmailing her to accept him, even if Henry does seem to be genuinely in love with her. Her instincts prove to be right.

Mansfield Park is possibly Austen’s sexiest book, and I think this may be one reason–other than the yawn-inducing Fanny and Edmund–why it’s her least favorite. I suspect it may be beyond many readers’ comfort zones–it doesn’t sound like dear Jane. There’s a tremendously strong physical awareness between her characters:

… she gradually slackened in the needle-work, which, at the beginning, seemed to occupy her totally; how it fell from her hand while she sat motionless over itâ€”and at last, how the eyes which had appeared so studiously to avoid him throughout the day, were turned and fixed on Crawford, fixed on him for minutes, fixed on him in short till the attraction drew Crawford’s upon her, and the book was closed, and the charm was broken.

And the most blatant expression of physical desire of all of Austen’s books:

…Maria, still feeling her hand pressed to Henry Crawford’s heart, and caring little for anything else.

The characters are equally conscious of their physical presence indoors and outside. The book is full of references to space, horizons, the landscape improvements of Repton and others that open up vistas; and their movements around the house are like stage entrances and exits. There’s an extraordinary scene, elaborately choreographed, involving a locked gate, when the Bertrams, Fanny, and the Crawfords visit the estate of Miss Bertram’s fiance. When Fanny visits her family in Portsmouth you almost expect her to whip out a tape measure, so shocked is she by the humble dimensions of the rooms.

Enough from me. Have you read Mansfield Park? If not, why not? If you have, what do you think of it?

This entry was posted in Jane Austen and tagged Jane Austen, Mansfield Park. Bookmark the permalink.