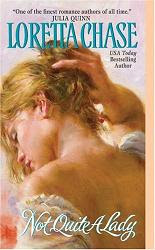 There are fewer romance novels on my list this year than usual. I’ve been writing very intensively and have trouble reading and writing romance at the same time. I read romance only in brief binges between drafts and during vacation. I did get to enjoy a few of the Riskies’ recent releases, but some are still on my TBR pile. 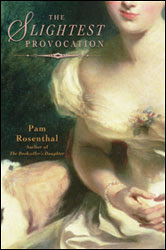 I won’t mortify myself any further by telling which ones or trying to pick favorites! Anyway, the best non-Risky romances I read during this year’s vacation were NOT QUITE A LADY by Loretta Chase and THE SLIGHTEST PROVOCATION by Pam Rosenthal, both highly recommended.

I have managed to do a lot of reading out of genre, since it’s my second year with a book discussion group. My favorites among this year’s selections included: 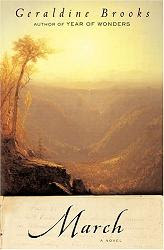 ORDINARY HEROES by Scott Turow, DIGGING TO AMERICA by Anne Tyler, THE BIRTH HOUSE, by Ami McKay and WATER FOR ELEPHANTS by Sara Gruen. Probably of most interest to Riskies and friends was MARCH by Geraldine Brooks, the story of what the father of Louisa May Alcott’s LITTLE WOMEN experienced during the year he was away from his family. I love Brooks’s use of period language and detail. I also found the portrayal of the adult Marches very illuminating: not idealized as seen through their daughters’ eyes but with human imperfections revealed but still consistent with the world Alcott created. Having rather recently become a Unitarian Universalist, I also found it interesting and inspiring to read about these early Unitarians and their concern for social justice and the abolition of slavery. 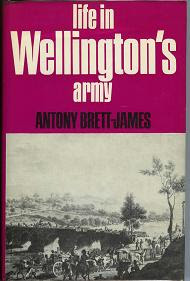 This year I’ve probably read more research books than most, because this current mess-in-progress is a veritable research hydra. Sometimes I wonder if I’m a masochist to come up with a hero who’s an army brat turned balloonist. But I love him. I digress. Back to the books.

My favorite new reference is LIFE IN WELLINGTON’S ARMY by Antony Brett-James. It’s chock-full of wonderful details on all those aspects of military life that are glossed over in the big histories: how they camped, ate, marched, what they did for fun. It’s so vivid the theme music from the Sharpe series kept playing in my head as I read.
Have you read any of these books? What did you think of them?

Elena, I loved “March” and “The Slightest Provocation” too. I’ve heard great things about “Water for Elephants” which I now realize I forgot to put on my Amazon wish list.

I too enjoyed “March”. I like books that take familiar stories and show them to us from a different POV (Jean Rhys’ “Wide Sargasso Sea” and Gregory Harrison’s “Wicked” come to mind).

I haven’t read “March,” but it does sound interesting. I’m an LM Alcott fan of old; I haven’t re-read anything of hers in years, I confess, but I’ve read everything “normal” by her many times, and I still collect her rarer books (Aunt Jo’s Scrap-Bag, etc). I read at least one biography of the Alcott family, and I do recall that things were a lot weirder in the Alcott family than in the March family (e.g. anti-sex and anti-milk communes, etc.)

Anyway, Elena, I’m encouraged by the fact that you say it’s “still consistent with the world Alcott created” — as I mentioned when talking about Joan Aiken’s JANE FAIRFAX, it does annoy me when someone basically ignores, distorts, or “reveals to be a lie” the source material… 🙂

(And I blushingly confess I’ve not yet read the Pam Rosenthal or the Loretta Chase, though I mean to!!! I will!!! Honest!!!)

I also really liked “March”! And I think I have that Wellington book somewhere around here…

I read “Not Quite a Lady” and enjoyed it very much. The heroine was different and I liked that.

I loved the Loretta Chase and Pam Rosenthal books!!! Actually, they could write grocery lists, and I’d read them. The same goes for both books by Lisa Kleypas (hist and contemp).

I loved March as well — for telling us what Mr. March’s priggish little homecoming speech was hiding, and for the portrait of Marmee (one or two lines from Little Women spun out so beautifully and touchingly…)

Like Amanda, I’ve got the Wellington book around here somewhere — I read enough of it to learn how detail-oriented Wellington was, so I gave Kit Stansell a passion for detail, learned under Wellington…

And thanks for the nice words about The Slightest Provocation.

I read NQAL, which I liked, but didn’t like as much as some of LC’s other books (which is to say, a whole heckuva lot).

I loved the Slightest P, too. That Wellington book sounds cool.

You ladies are going to break me! Now I have to go out and buy the Wellington book. Sounds great! Loved The Slightest Provocation and Not Quite a Lady. Water for Elephants is on my TBR pile at this point. Haven’t read March, but I do love Louisa May Alcott’s books.

Haven’t read March, but I do love Louisa May Alcott’s books.

The thing to remember about MARCH is that it’s the adult perspective and explores the parents’ flaws as well as their strengths. As I said I found it consistent with LITTLE WOMEN in terms of the story but does not provide the same sort of experience. Some ardent Alcott fans might be put off by it. It’s not a cozy read.

Oh, groan, Elena. You know I won’t be able to resist buying Life in Wellington’s Army!

I have a book called Redcoats which does the same thing-discusses what it was like to be in Wellington’s army.

But now I need another one!

I read, and enjoyed, Mozart’s Women. Since Loretta Chase’s previous book, Lord Perfect, was my absolutely most favorite romance of the past several years I was a bit disappointed with Not Quite a Lady. Not terrible, but not her best. But her best is incredibly good. I was a big fan of her trads. Sandlewood Princess, anyone?

I hadn’t read March but I ought to. My very first writing sale, back in 1978, was an article I sold to American Heritage about Louisa May Alcott’s childhood. I focussed on her father, Bronson, whom I’d adored. Alas, everyone who read it told me what a great job I’d done of showing what a jerk Bronson was. Even then, my taste in men was not mainstream.

American Heritage paid me on acceptance, a huge amount, enough to buy a new sofa for my living room and have money left over. Then the acquiring editor died, the magazine’s format changed, and my article never saw publication. In retrospect, it amazes me that they paid on acceptance. And how much!

Can any young person nowadays imagine a world in which it was possible to pay the rent freelancing?

Can any young person nowadays imagine a world in which it was possible to pay the rent freelancing?

Heaven! Yes, the days when one could have a career writing science fiction short stories, or random articles, or the like…

Since Loretta Chase’s previous book, Lord Perfect, was my absolutely most favorite romance of the past several years I was a bit disappointed with Not Quite a Lady. Not terrible, but not her best. But her best is incredibly good.

Funny, I felt the opposite way. I enjoyed LORD PERFECT but felt the romantic conflict wasn’t as strong as in her other books. I love her traditional Regencies but love some of her longer books even more. LORD OF SCOUNDRELS and MR IMPOSSIBLE are my favorites.

But using a simile we often resort to here at RR, comparing Loretta Chase romances is rather like comparing different kinds of chocolate–there are no bad choices. 🙂