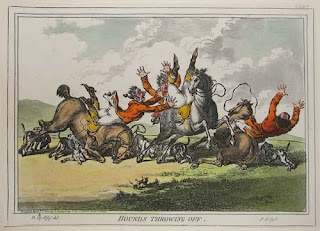 Of course, I’d heard about Boxing Day before but since I never needed it for a story, I had only a vague idea that it had to do with giving presents. In boxes, of course. So exactly what is Boxing Day and what are the associated traditions? I googled and found a delightful explanation on the website of the Woodlands Junior School in Tonbridge, Kent. Boxing Day is a time of charity. During the Regency, people would give gifts to their servants and to the poor. According to the website, an “‘Alms Box’ was placed in every church on Christmas Day, into which worshippers placed a gift for the poor of the parish. These boxes were always opened the day after Christmas, which is why that day became know as Boxing Day.”

Other traditional Boxing Day activities include fox hunting, indoor games or appropriate wintry outdoor pursuits. There is also a custom of hunting the wren, a bird one was not allowed to hunt any other day (though why one would wish to hunt wrens is beyond me). 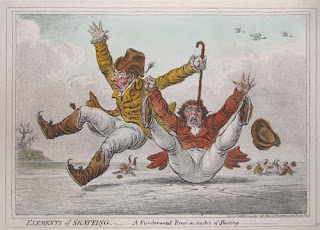 Today, I will not be foxhunting, nor ice skating, nor hunting wrens. Instead, I’ll be on a family outing organized by my parents to see a dinner theatre performance of “White Christmas”. The group will include all 5 grandchildren ranging in ages from 5 to 11. I don’t know if my parents know what they are letting themselves in for! My own children are among the older ones and they will behave (or risk, as Dumbledore put it, “a very painful death”). But as for the others–all bets are off. Plan A: pretend we don’t know them. Plan B: drink heavily.

So what are you doing to celebrate Boxing Day?

If you are looking for something to do, why not send a postcard to the Woodlands Junior School? (Here’s the address.)

Elena Greene grew up reading anything she could lay her hands on, including her mother's Georgette Heyer novels. She also enjoyed writing but decided to pursue a more practical career in software engineering. Fate intervened when she was sent on a three year international assignment to England, where she was inspired to start writing romances set in the Regency. Her books have won the National Readers' Choice Award, the Desert Rose Golden Quill and the Colorado Romance Writers' Award of Excellence. Her Super Regency, LADY DEARING'S MASQUERADE, won RT Book Club's award for Best Regency Romance of 2005 and made the Kindle Top 100 list in 2011. When not writing, Elena enjoys swimming, cooking, meditation, playing the piano, volunteer work and craft projects. She lives in upstate New York with her two daughters and more yarn, wire and beads than she would like to admit.
View all posts by Elena Greene →
This entry was posted in Uncategorized and tagged Boxing Day, Christmas. Bookmark the permalink.
0 0 votes
Article Rating
Subscribe
Login

They are traditions still in practice too – Most hunts have a Boxing Day Meet (although they are no longer permitted to hunt foxes) and people still give gifts to tradesmen – although often it can’t happen ON the day. I have a box of biccies for the Bin Men, but they don’t come till Friday.

Too funny…I posted to my blog before reading others, and also linked to the Junior School in Kent. (I’ve since changed out the link to something else!)

For us, Boxing Day is almost as celebratory as Christmas Eve and Day. It’s also the day I do my charitable donations for the year.

Great blog, Elena! How funny that you mention Tonbridge in Kent. In 1980 my college choir did a concert tour of the UK. We stayed with families in the towns in which we sang. I got to stay with a lovely family in Tonbridge with whom I still correspond. They took me to Ightam Mote, a wonderful stately home. I will have to send the school a postcard from the wilds of Wetumpka, Alabama. Happy Boxing Day, everyone!

LOL Margaret! But no wonder actually, the Junior School has a very nice website. My kids are looking forward to writing them.

And the dinner theatre went more smoothly than expected. Just a one-Shiraz event, no more than I would have had anyway. ðŸ™‚

I celebrated Boxing Day by having Mexican food. Not the traditional Regency Boxing Day meal, perhaps. But crunchy.

Happy Boxing Day to all! I celebrated by reading some of my Christmas presents. (I prefer the kind of presents that you can read. Though the kind you can eat are also nice. ðŸ™‚

Actually for a long time when I was younger I always thought boxing day had something to do with boxing. You know, the sport. LOL Although I guess you can get a regency connection to that since they did box, but anyway, I just proved even after all these years I’m nuts. ðŸ˜‰

Nice blog, Elena!
I spent Boxing Day driving in the rain to Williamsburg, VA, where my in laws live. Me and my daughter (husband and son drove separately)and a million other cars on the road.
But my new GPS made it a bit more amusing than it might have been; we got off the highway and on to Rt. 1. And didn’t get lost!

Actually for a long time when I was younger I always thought boxing day had something to do with boxing. You know, the sport. LOL Although I guess you can get a regency connection to that since they did box, but anyway, I just proved even after all these years I’m nuts. ðŸ˜‰

Let’s form a club then! I used to wonder the same thing when I was a teen reading my first Regencies. ðŸ™‚