I recently read that about 50% of Americans make New Year’s Resolutions but only about 15% of those manage to keep them. I’m not surprised. Each year in January our local YMCA gets crowded but by February the swim lanes free up and there’s room in the exercise classes again.

Anyway, I’m not much into New Year’s resolutions but this year I’m making one that’s humble and painless. I’m going to trim my other responsibilities just a little and make more time to read. I’m going to make a real dent in my TBR list, which I actually put on paper yesterday. Here are some of the books–I may not get to them all, of course, but I hope to at least read a few in each category.

Firstly I want to catch up on my fellow Riskies’ books. I also will treat myself to another Laura Kinsale. There are just 2 of her backlist I haven’t read yet. I’m savoring them in the hopes that by the time I’m done she’ll have a new one out. I also want to read more of Judith Ivory’s backlist. She’s another who writes beautiful and different romance. I also want to try something by Anne Stuart–maybe titles mentioned by Janet and Megan in our Best Reads of 2007 Week.

Through my book group, I’ve read more mainstream and literary fiction than I used to but of course reading begets more reading. So now I have a number of solid book group recommendations including titles like The English Patient, The Secret Life of Bees, Far Pavilions.

This year I’d like to start repairing a great gap in my education as a historical romance author. I’m well-read in Austen, the Brontes and Sir Walter Scott but want to delve more into period fiction. That section of my TBR list includes boooks like Pamela and Evelina and Elizabeth Gaskell’s Wives and Daughters.

It’s been too long since I’ve read any fantasy besides Harry Potter. Based on everyone’s recommendations, I know I’d love the Temeraire series by Naomi Novik. My oldest child raved about Cornelia Funke’s Inkheart books; I must try those too. I’m also curious to read The Golden Compass. The controversy about its treatment of religion intrigues me as much as everything else. Maybe I can get to this by the time the movie is making its second rounds.

I want to continue Cornwell’s Sharpe series. If I have time, I’d also like to delve into Horatio Hornblower and the Patrick O’Brian books.

I like to try at least one new book on the craft of writing each year. I recently finished Stephen King’s On Writing (another blog on that) so the next on my list is Joseph Campbell’s Hero with a

Thousand Faces. Critics of Vogler’s The Writer’s Journey claim Vogler just ripped off Campbell. I like The Writer’s Journey a lot and suspect Vogler added to Campbell’s ideas and made them easier to work with. Still, I expect the original to yield up some new treasures. 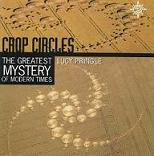 And just for fun, I want to read something about crop circles, just because I find them interesting.

So these are my New Year’s Reading Resolutions. What do you think? Are there any books I should add, remove, replace?

Do you have any New Year’s Reading Resolutions? What are they?

And how can anyone ever complain that there’s nothing interesting to read????

Ah well, I don’t have any of those near me. . . LOL 🙂 So I can’t really help. But I just hope to read as much as possible through the year. 😉

My reading resolution, as it is pretty much every year, is to read at least 100 books. (I read really fast.) I have a list of books I really should’ve read by now, topped by War and Peace, but I don’t resolve to read specific books. And I doubt this will be the year I get to W&P because if I can’t read a novel in a few days, I tend to lose focus. So books much over 400-500 pages don’t fit into my full-time job, mother of a 3-year-old, trying to write my own novels lifestyle.

I loved Amanda Foreman’s “Georgiana: Duchess of Devonshire” and Vogler’s “The Writer’s Journey”. Another good book is “The Joseph Campbell Companion: Reflections on the Art of Living” by Dian Osbon.

My resolution is to trim my TBR pile to a reasonable size, but I know I’ll get distracted by new (or at least new-to-me) books — it happens every year. I did read the Foreman book and saw a preview of the movie, which stars Keira Knightly, when I saw “Atonement”.

One good thing I did last year was to read a lot more. I am still way behind on everything I mean to read — I guess my increase was in “unplanned” books 🙂 — but surely this year I’ll chip away at the TBR monument!

I have LOTS of resolutions!
1.Reading more is one of them.
2.Organizing my time better.
3.Cleaning my book room and cataloguing the research books (ha!)
4.Go to Curves at least 3 times a week
5.And the usual…lose 30 pounds.

Elena, I LOVED The Far Pavillions. And Sharpe, too, of course.

Great book choices, Elena. I too cannot figure out how someone can say there is nothing out there to read. I taught a high school course on Campbell’s Hero With a Thousand Faces. The kids loved it. I just want to keep my TBR pile at a non Eiffel Tower level! My resolutions, if you want to call them that are to (1)Write more. (2)Get published. (hey a girl can dream, can’t she?) (3)Organize my house. (4)Catalogue all of my books on LibraryThing. (5)Continue to build my research library. (6)Get more of my five acres under control by increasing my gardens.

Great post, Elena! Reading more–there’s a sentiment that I can get behind. Even if I quit my job, though, I’m not sure I could get my TBR pile any shorter…it grows faster than I can read! Prompted by Susan Wilbanks, I just totted up my book list for 2007, and I didn’t break 100 books. 🙁 But it was still a respectable total. I’m embarrassed that I didn’t read more romance, though. Oo! Sounds like a New Year’s Resolution to me!

When I finished my draft and sent it to my editor 3 weeks ago, I had a clear set of priorities about what I was going to read and in what order. But so far I’ve only opened #’s 2 and 4 on the list, finished one other, started two others I care about and another I might get to sometime. Oh, and then there’s one for my book group at the end of the month.

Because jeez, there are just so many sleepers and dark horses out there — not to mention the serendipitous (occasionally brilliant) suggestions from my near and dear.

The techies among you will understand about push and pop logic — which is what keeps happening to my TBRs: all that wonderful read-it-NOW stuff getting popped on top of the stack, like on cafeteria trays.

Susan, there is a new translation of W&P out now which is supposed to be great. I have a copy from the library, but sadly it’s too heavy for the commute.

Elena, I hope you love Wives & Daughters! It’s one of my favorite books.

Ah, New Year’s Resolutions. Could never keep one worth a damn, so I stopped making them years ago. However, I do have some goals in mind. Chief among them is to get published this year. I am resolute in this. So, from this keyboard to the powers that be both temporal and celestial and in the words of the great Yul Brenner: So let it be written, so let it be done.

Hey, and I don’t feel nauseous. No, wait. I spoke to soon!

Santa,
The Wet Noodle Posse are doing a year of blogs aimed at helping at all aspects of writing. I hope you’ll visit us. January we are tackling “Getting Started” Next month is “Character”