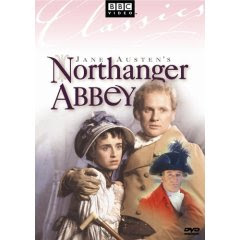 Welcome to the Jane Austen Movie Club! On the first Tuesday of each month, we at Risky Regencies discuss a different Jane Austen adaptation.

This month: the 1986 BBC version of Northanger Abbey!

As I mentioned last month during our Jane Austen Novel discussions, Northanger Abbey is one of my favorite Austens. The wit, the liveliness, the Bath background — I love to read it again and again.

(That is, I love to read the first half of the novel. Sometimes I stop there. Sometimes I go on. I do like the second half, but for me, it comes nowhere near the exuberantly silly Bath bits.)

So… Have you ever seen this adaptation?

If so, what did you think?

To aid the discussion, here’s the cast (etc) info on the movie, courtesy imdb, plus a few interesting cast tidbits (in green):

Jonathan Coy played the Prince of Wales in the Richard E. Grant versions of the Scarlet Pimpernel, and was also in one of the Gruffudd Horatio Hornblowers. 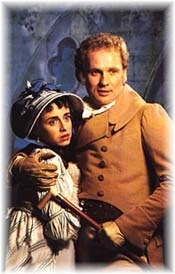 Two notes: first, I will be out most of today; I’m seeing the Rose Parade this morning (first time ever!), and in the evening I’ll be attending a going away dinner for my mother, who’s setting off on a round-the-world cruise. But I’ll check in whenever I get a moment!

Note 2: In the US, PBS will start showing the new Jane Austen adaptations this month. And on the Tuesday following each of these new Austens, we’ll have an extra Jane Austen Movie Club here, to talk about it! So the January schedule will be:

So… What did you think of the 1986 Northanger Abbey?

Cara
Cara King, who thinks this will be a very exciting January

Happy new year, everyone!
Oh, I LOVED this version. Loved the scene in the baths where the women walking around with trays of refreshments hung around their neck, Catherine’s cheesy horror movie fantasies, the little pageboy turning cartwheels in the garden (oops, I’ve just borrowed that in the partial I’m writing).

Also when Catherine goes for the drive with John Thorpe, they go past the house my aunts used to own on Lansdowne Place West and onto Lansdowne Crescent, which is very beautiful and still has a field for grazing in front of it.

I’d heard mixed reviews of this movie but asked for it for Christmas anyway. I enjoyed it more than I expected. Like Janet I enjoyed the Bath scenes and the gothic horror fantasies though I wonder if all viewers could see how funny they were.

I liked Katharine Schlesinger in the role–she was not too pretty and a bit goofy but quite endearing in her way.

Peter Firth I had more mixed feelings about. It’s been too long since I’ve read the book but he seemed old for the role. I always imagined him to be just a bit older and more sophisticated than Catherine–which doesn’t take much! And there were moments when his accent sounded odd. Did anyone else notice that? But aside from all that he grew on me.

Another niggle–the Thorpes were so blatantly awful I wondered if even a very naive girl from the country should have seen through them.

But anyway I enjoyed the film and now I really want to reread the book!

I actually haven’t seen this one so I will have to find it and give it a look. Northanger Abbey is one of my favorites. I am off work today so I can watch the Rose Bowl Parade on television. Wave at us!!

Okay, pretend I waved at you, Doglady! 🙂

I’m back from the parade, and proud to have survived it. One of the most fascinating things is seeing what the city and local businesses do in order to protect themselves, and sometimes profit, from the parade…which is a force of nature. Or so it often seems.

I admit I am pretty changeable in my opinions about this version of NA. The first time I watched it (having read the book a couple times), I loved it. Second time, several years later, I hated it. Watched it again last week, and I liked it much better than time #2! But less than #1. 🙂

Got to run and bake a pie, but I’ll be back soon, when I can make a more detailed and intelligent comment here!

Okay, here are a few of the thoughts I had upon this rewatching:

2) I agree with Elena about the Thorpes, especially Isabella. I picture her less obviously sly, and more bouncy and with a more “natural” demeanor.

3) The Gothic fantasies, though, just creep me out. They always have. And I find them so silly! Though not in a good way. 🙂

4) LOVE the scenery and costumes!

5) However, this would have looked better if it had been made on film, not video.

6) Why did they creep up General Tilney, and have him hang out with that bizarre freaky woman? That is not the image I have of him at all.

7) I liked Peter Firth more this time than the last, but…not my picture of Tilney. I picture him as lively, and young, and funny, and energetic, and a bit mischievous, and very quick. Peter Firth seemed to be playing him like an 18th century fop or something… which, IMHO, makes him a very bad match for Catherine!

8) I thought the actors didn’t look different enough… So on occasion, it actually took a moment to figure out if I was looking at Tilney or Thorpe…or Isabella or Eleanor. (Okay, I can tell Tilney from Isabella!) 🙂

BTW, Janet, that’s so cool about your aunt’s old place!

Okay, got to run again… Will hopefully stop in again soon!

I had never seen this adaptation, but by a tremendous coincidence I watched it only last week! So it is reasonably fresh in my mind. 🙂

I liked it pretty well, on the whole. I agree that Peter Firth seemed a bit too old for Catherine–and there was this weird thing where he kisses his walking stick. I don’t want to probe too deeply into the psychology of that! But aside from those, I actually liked him pretty well. I also agree that General Tilney seemed a bit overly creepy, though I put that down to the attempt to give parts of it a gothic-y feel. I liked Catherine quite well, and thought parts of it were very funny. And the scenery was pretty.

A couple of quibbles: in the book, Thorpe goes around bragging about how rich Catherine is when he thinks he has a chance with her, and then he changes his tune when he realizes that he doesn’t. In the film, it looked like he did it the other way around! Which doesn’t make much sense. And I object to Catherine burning books. They are far too expensive, and the leather cover smells terrible when burned. Or so I imagine, anyway.

I’ve always liked Northanger Abbey. I found the movie fun to watch. I adore the Bath scenes but I also like the gothic twists because they remind me so much of what I would imagine Victoria Holt’s books would ‘look’ like.

PS I wasn’t at my laptop of a couple of days and had a devil of a time getting to the current screen of the blog. Is there anyway to update google pages?

I’m not much good at commenting on this one, since I haven’t seen it since I was a kid and couldn’t get it on Netflix! (Bad Netflix, bad!!) But I do think NA has a tremendous amount of potential to be an entertaining film. Can’t wait to see the new version this month!

Amanda — I admit I was dismayed when I checked Netflix, and realized that this NA wasn’t even offered! I might not have chosen it for discussion had I known…

I wasn’t at my laptop of a couple of days and had a devil of a time getting to the current screen of the blog. Is there anyway to update google pages?

Santa, I’m not the most technological of the Riskies, so I admit I’m not sure what you mean; if Elena stops by, though, perhaps she’ll know what to do! (Elena is All Wise.)

Santa, I’m not the most technological of the Riskies, so I admit I’m not sure what you mean; if Elena stops by, though, perhaps she’ll know what to do! (Elena is All Wise.)

Alas, no, I’ve just been faking it! Santa, I’m not sure what you mean either. FWIW when I googled “Risky Regencies” the main page of the blog came right up. Is it something else you meant?

Happy New Year! 🙂 Alas, I haven’t been able to get me a copy of this one, so haven’t caught it. Darn. LOL 🙂 But still love the book!

But still love the book!

I loved this version, and saw it when it came out on Masterpiece Theatre. It’s filled with satire, and I remember I had to go out and order the gothic romance Catherine was reading. I think it was The Mysteries of Udolpho. I haven’t seen this version in years. But I thought it was good. I cannot wait to see the new versions of this one and Persuasion. Great post.

Sorry for all the confusion. What I meant was that when I googled Risky Regencies I would get a blog dated December 20th and not the current date.

Speaking of Udolpho, I read it, too, eons ago… Seemed to me it had far more description of mountains, and far less description of horrible acts, than Northanger Abbey led me to suspect! 🙂

Sorry for all the confusion. What I meant was that when I googled Risky Regencies I would get a blog dated December 20th and not the current date.

Hmmm…that’s odd, Santa! I just tried, and it gave the current page, so hopefully it was a temporary glitch or something…

Do you know if they (BBC)will be remaking this one in the near future or is Northanger Abbey not considered an Austen classic?

All Austens are classic! 🙂 Okay, maybe not all the juvenilia, but the six novels all are. And yes, there’s a new version of Northanger Abbey (though I think technically it was made by ITV, not the BBC), and it will air on PBS in the US on January 20!!! (That’s a Sunday; we’ll be discussing here on that Tuesday!)

Here’s a post I did on it a while ago:

The January schedule of three of the new Austens (NA, Persuasion, and MP) and our discussions is:

Thanks, Cara. I did read that on your post but it went right out of my mind. Glad to hear they’ll be airing the 1995 version of P&P!