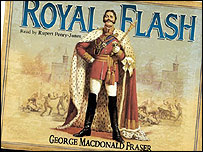 I was sad to hear that George MacDonald Fraser, creator of the Flashman series and one of the great historical novelists of our time, died a few days ago. 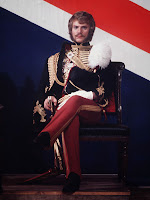 Fraser took a minor character, Flashman the school bully, from the nineteenth-century novel Tom Brown’s Schooldays, and elaborated on his later career. Flashman is one of the great literary anti-heroes–quivering in fear, lying and cheating his way out of trouble, and behaving in a thoroughly despicable way (particularly where women are concerned), he manages to become embroiled in just about every military crisis of the nineteenth century. He’s a survivor of the Indian mutiny, the battle of Little Bighorn and the charge of the Light Brigade; and he managed to fight on both sides of the American Civil War. Despite his egregious behavior he manages to emerge from each adventure a revered and adored hero. 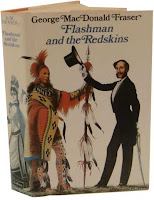 His many decorations include the Victoria Cross, US Medal of Honor, and San Serafino Order of Purity and Truth, 4th class, and in addition to his military dishonors Flashy was director of the British Opium Co., honorary president of the Mission for Reclamation of Reduced Females, and author of such works as Twixt Cossack and Cannon and The Case Against Army Reform.

Fraser presents his books as Flashy’s memoirs, based on original documents discovered in an attic, with Fraser’s meticulous footnotes and comments–hilarious stuff and totally devoid of political correctness. Fraser was particularly proud of the fact that in the US, over one third of the reviewers of the first Flashman book thought they were reading genuine memoirs and not meticulously researched and written fiction.

Have you read the Flashman books? What are your favorite moments? One of mine is when Flashy (and I can’t remember whether it’s shortly before or after he’s shot in the backside), meets a young lawyer called Abraham Lincoln and tells him you can’t fool all of the people all of the time… And then there’s the wagon train going west, that includes an entire New Orleans whorehouse on the move and a wagon of invalids, battling the plains for their health…

I haven’t read the Flashman books but Rik Mayal played a similar character in the Blackadder series that always made me laugh out loud. Did see a bit of the movie starring Malcolm McDowell on cable a few years ago. And Lauren Willig over at the History Hoydens mentioned that Fraser’s Pyrates is one of her favorite books.

I haven’t read the Flashman books either, but a couple of friends (one a fellow writer) were talking about them recently in a way that made me really want to read them. I love it when writers can intertwine fictional characters with real historical events so seamlessly. And Lauren’s post today made “Pyrates” sound wonderful!

I love being a Risky. I learn so much. I had no idea there were such clever novels like Flashman.
So sorry the world lost George MacDonals Fraser.

How wonderful to learn about yet another entertaining series. This sounds right up my alley! Cannot wait to find them and read them. This sort of satirical writing is one of my favorites. I just hate that I didn’t find out about these books sooner. Someone who can do this that well will be missed.

My mom recommended the Flashman books long ago, though I’ve never gotten around to reading them. But I have read another novel by George Macdonald Fraser: Black Ajax, about the Regency-era prize fighter Tom Molineaux, and the famous Cribb-Molineaux championship fight. It is told from the points of view of many different people of the period, including Pierce Egan, the author of Boxiana and (more famously) Life in London–with those two gentlemen-about-town Tom and Jerry. I really enjoyed Black Ajax, and I recommend it highly!

I’d heard of Flashman before, but never read the books, probably because the idea of antiheroes never really appealed to me…but who knows, maybe I’d like the books if I actually read them! 🙂

Hehe. If you’re planning to read Flashy, just try him out first. The books are a little… salty. He genuinely is a completely reprehensible character, through and through – Fraser pulled no punches with that!

But, oh, the research. The research will blow you away. You really do feel like you’re there, and even famous battles are so well recreated that you’re on the edge of your seat, even though you know how it ends.

I didn’t know Fraser had died. How sad.