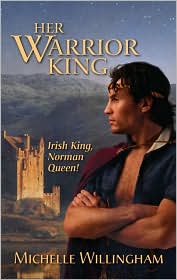 1) Tell us about Her Warrior King!

Her Warrior King was technically the first book in the MacEgan Brothers series. When I first wrote it, the book had some serious flaws and didn’t sell. I put it aside and wrote Her Irish Warrior which did sell. I had also written The Warrior’s Touch in the meantime, and with both of those books coming out, I wanted to resurrect Her Warrior King.

I polished the first three chapters, dumped the rest of the book, and started over. It was truly a hard book to write because I had to let go of my previous version and start fresh.

The hero, Patrick MacEgan, is a king struggling to rebuild his Irish tribe after they were defeated by Normans. The price of their lives was an alliance with a Norman bride. Patrick agrees to wed Isabel de Godred, but he refuses to let his bride play any part in their lives. But what he doesn’t count on is Isabel’s idealism and desire to be a true wife. She’s stubborn, spunky, and is not about to let her Irish husband isolate her upon an island. She does everything she can to help their tribe, trying desperately to fit in. But the tribe won’t have anything to do with her. Patrick begins to sympathize with her efforts, and slowly Isabel conquers his heart. Then Patrick is faced with having to choose between his people and the wife he has come to love.

I loved these characters, and Isabel kept surprising me with things she did to make her place among the tribe.

I think the most startling scene, for me, was when she couldn’t find a boat to escape the island and she swam across the channel!

2) How does this fit with your previous releases?

It’s being released as a prequel, and it’s technically book 1 in the series. I would have liked to have the books come out in chronological order, but the original version had too many flaws to be published first. It’s not necessary to read the books in any particular order, but I’m glad that all three stories will be told. For readers who wanted to hear about the story of Patrick and Isabel, they finally can learn what happened.

3) Did you come across anything interesting in your research for Her Warrior King?

At first, I had made Patrick’s rank a chieftain, but after consulting with an Irish archaeologist, he pointed out that Patrick commanded too many people to be a chief or chieftain. Instead, he recommended that I make him into a petty king. I was startled to learn how many kings there were in Ireland–hundreds at one point!

Most readers’ impression of a king is one person governing a country, but in Ireland, they would elect a High King from all of the provincial kings. Being king wasn’t necessarily a birthright, either, although often the previous king’s sons were the strongest candidates.

Patrick is a fictional provincial king from an imaginary kingdom not far from Waterford. This was where the Norman invasion took place in real life.

4) Your settings are so well-drawn! What is it about medieval Ireland that makes you want to set your books there?

Anyone who has ever visited Ireland knows that the country has a mystical sense of folklore and romance. When I visited some of the ancient ruins, I could imagine sexy Irish warriors riding through the grounds.

Scottish heroes are always popular, and I wanted to put my own spin on Celtic heroes. Medieval Ireland seemed to be an untapped wellspring, and then I had a great excuse to return to the country last year, to continue the research.

5) I know you have three kids AND a teaching job! I think I speak for all writers when I ask–what are your time management secrets???

Early bedtimes! My children aren’t aware that other kids don’t go to bed at 7:00 p.m. Shh! Don’t tell them! I use the night hours to write, but that’s been more challenging lately with the birth of my son this November. But I do try to write, edit, or revise every day to keep my head in the story. I love what I do, and it’s not truly “work” to me.

I am finishing a book that’s set in 1101 AD, tentatively titled SLAVE TO HER DESIRES. It’s about a slave who comes to love the woman betrothed to his master. Kieran is a woodworker, and there is a connection to the MacEgans…but readers will have to wait and find out what that is!

Thanks so much, Michelle, for visiting with us again (while your kids are asleep, LOL).

For a chance to win a signed copy of Her Warrior King, comment on this post and watch for tomorrow’s announcement of the winner.

To keep track of all visitors at RR, sign up for the newsletter at riskies@yahoo.com!

I would love to read more about Isabel(you go girl!) and Patrick. Please enter me.
Isabel, the spunky woman sounds very interesting.

I am enthralled with this story and the background. It sounds fascinating and would be wonderful to read.

The story sounds great!! I can’t wait read it!

Gosh, Blogger is acting strange today. The font is very odd, for whatever reason. Hmmm…

I love the sound of this book. There is nothing better than a heroine who refuses to take no for an answer. Men, especially kings, can be so stubborn sometimes. Speaking of stubborn, good for you, Michelle, for not giving up on your “firstborn” book. How hard was it to go back and rewrite it and how hard a sell was it to your editor(s)? My first novel is finished, well I am still in revisions, but I have a sneaky suspicion the sequel I have outlined will be an easier sell – more angst, a series of murders, a recluse hero – things like that. The first novel is more of a comedy. How tough is it to sell them on that prequel idea?

I just tried to fix the font. Hopefully it is more readable now.

Thanks for this great interview, Michelle. Talk more later, taking my daughter to a concert now!

Blogger was being a bit of a poo this morning when I tried to post anything! 🙁 Hopefully this will work now.

I just popped over to say hey! I loved loved loved Her Irish Warrior, and after the bits you told me about Patrick’s story, I’ve been dying to read it. Ordered Warrior King last week and should get it soon. *rubbing hands with glee* 😉

I read Her Irish Warrior, and am so pleased that there is a historical setting beyond Regency England (ducking and running from the Riskies) to explore. I love all sorts of time periods and locales, and am glad you’ve expanded my reading! And Ireland—what’s not to love?

Michelle, it is so wonderful to have you here again. Her Warrior King sounds wonderful. Two very strong characters. I haven’t purchased my copy yet, but I will!

“that there is a historical setting beyond Regency England (ducking and running from the Riskies) to explore.”

LOL! No need to run from me, Maggie. 🙂 I think I have two personalities–Regency Amanda and Renaissance Amanda. They sometimes have arguments.

Michelle, I’d love to know what some of your favorite research resources are for this period/locale!

It’s nice to meet you Michelle! I’ve never read an Irish medieval before! I’ll search for this book next time I’m at B&N, which is every Friday night. 🙂

Isabel is one of my favorite female names.

Great interview. I’m glad to hear you were able to go back and get your first book published.

I enjoyed Her Irish Warrior and I’m looking forward to your new release! Oh and congrats on the new baby!

Having 3 children myself (now all grown), I can only admire your ability to get them all to bed early and still have the energy to write. Saw your book in the store today but have already blown the January book budget. After reading the interview, however, I may have to borrow from February’s budget.

I agree that Ireland is an untapped source for stories. I always think of the Norman invasion in terms of how it affected England. I am more than intrigued to find out more about its impact in Ireland.

I really need to go back to reading more medievals!

Indeed, Michelle, I admire your stamina! And I love the bedtime trick. (It also sounds sensible to me — even at the age of eight I recall going to bed by 8 myself, though I think it’s less common nowadays…)

BTW, I love the backdrop on your cover…especially the castle!

I admire your ability to let go of what’s not working and your determination to start over. That must have been so hard. This really makes me appreciate the struggles authors go through to get a book published and available to us readers.

Finally back at the computer–whew, busy weekend.

Michelle, I’m another writer-mom. I’ve also struggled to write through all that sleep deprivation, ear infections, gakking in the night, etc… Congratulations for sticking it out. We are all glad you do!

Doglady–It was really hard going back to my “firstborn” book because by that time, I had finished 3 more novels. I wasn’t the same writer any more, and I had a hard time exorcising the old writing to make room for the new. The one good decision I made was not trying to revise the remaining old manuscript. It was a mess and it was far easier to write something new with the same characters than to try and fix the mess.

My editor had me revise the first three chapters, even after I thought I had taken out all of the old stuff, and then it was sold as part of a 2-book contract (The Warrior’s Touch was the first book).

As for it being a prequel, it didn’t matter so much since the other books stood on their own feet. I think any time you do a series of books, you need to have the book be independent so that readers can read them in any order.

Tracey–hope you’re able to find it. B&N is iffy about stocking Harlequin Historicals, but Borders and Wal-Mart definitely have it.

Amanda–I used A SOCIAL HISTORY OF ANCIENT IRELAND for a bit of my research, as well as a ton of other books. I’m a member of a listserve of Irish medievalists, and they have also been very helpful.

Diane–I bought your book today! Can’t wait to read it.

I chose comment #12 for the winner of the autographed book. Congrats to Tracey! If you’ll e-mail me at: michelle AT michellewillingham.com, send me your mailing address and I’ll get you the book. Thanks!