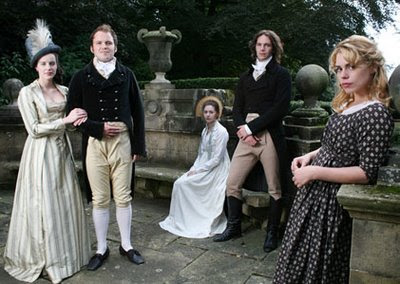 Welcome to another “meeting” of the Jane Austen Movie Club! This is where like-minded folk gather to discuss, debate, and dissect every adaptation of Jane Austen that we can get our hands on.

Today we’re talking about the new adaptation of Mansfield Park.

To aid the discussion, here are the major credits, with a few notes on some of the people involved. 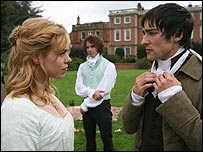 Maggie Wadey wrote the screenplay for the 1986 (creepy Tilney) adaptation of Northanger Abbey! She also wrote the 1991 Adam Bede and the 1995 Buccaneers.

In case anyone was wondering exactly what the relationships are, Jemma Redgrave is the daughter of Corin Redgrave (who played Sir Walter Elliot in the 1995 Persuasion), the niece of Lynn Redgrave and Vanessa Redgrave, and cousin to Natasha and Joely Richardson. 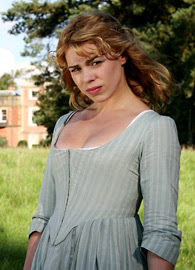 Billie Piper, of course, is famous for Doctor Who. She also played Sally Lockhart in the adaptation of the Victorian-set Philip Pullman novel The Ruby in the Smoke, and its sequel, The Shadow in the North (which also featured Northanger Abbey‘s J J Feild).

Does Blake Ritson look familiar? He played Cedric Diggory in Harry Potter and the Goblet of Fire.

James D’Arcy is certainly a familiar face — he was First Lieutenant Tom Pullings in Master and Commander, Blifil in the 1997 Tom Jones, and Nicholas Nickleby in the 2001 adaptation of the same name. 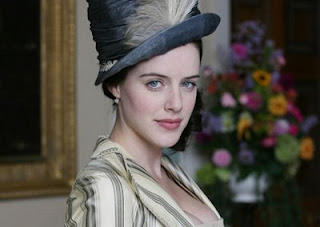 Michelle Ryan, in case you didn’t recognize her face from a million adverts and billboards, is the new Bionic Woman.

Joseph Morgan has played a sailor before — though his previous character had a less happy outcome. His William Warley, captain of the mizzen-top, didn’t end well in Master and Commander. 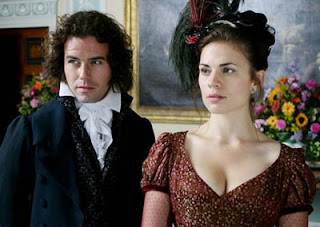 Hayley Atwell played alongside Billie Piper in The Ruby in the Smoke and The Shadow in the North.

So…what did you think???

Cara
Cara King, who will give a puppy from Pug’s next litter to whoever can say what country dances they were doing