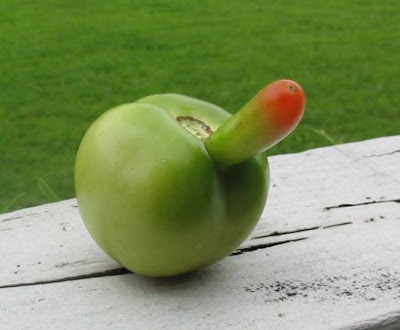 The other morning I walked outside and it smelled like spring–damp and mild. Of course it was Mother Nature fooling around, but it has seemed recently, with the slightly longer days, that spring is on its way. So I started thinking about activities that might make spring seem a little nearer.

For the gardeners among us, the catalogues start arriving, to be seized with damp sticky fingers and fondled and pondered. That got me thinking about food–oh, to be honest, when am I not thinking about food–and so I thought I’d check out what was available in the Regency kitchen garden at this time of year. According to Samuel and Sarah Adams, you could have beetroot, broccoli, cabbage plants (as opposed to cabbage, best in May and all summer, and if someone would like to explain that, please do), celery, endive, leeks, parsley, parsnips, potatoes, and spinach (The Complete Servant, 1825). Not too bad–of course availability of many vegetables would depend on what the weather was like and how deep the ground was frozen–England was emerging from a minor ice age (hence the Frost Fair on the frozen Thames in 1814). 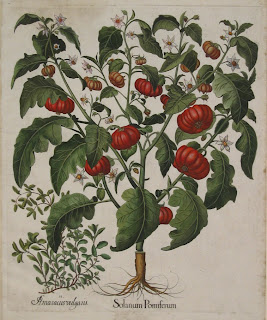 The Adamses don’t mention tomatoes at all at any time of the year, because the fruit/veg, whatever it is, was regarded with some suspicion in England. Allegedly, Hannah Glass’s cookbook of 1758 included a tomato recipe but until the end of the century cooks used them sparingly and mostly for flavoring soups. After all, the plant looked suspiciously like deadly nightshade. Others thought tomatoes might be aphrodisiacs, and the French referred to them as pomme d’amour (love apple). Italians, who adopted the new world oddity with enthusiasm, called them pomi d’oro (golden apple, suggesting that the first varieties to make it to Europe may have been yellow tomatoes).

This gorgeous illustration is of the African tomato from Basil Besler’s Hortus Eystettensis (1613)–you can see more of the prints from the work here.

What are you doing to prepare for spring? Are you dreaming of tomatoes or daffodils or beaches?

I can never decide what vegetables my Regency characters should have with dinner. Your list will help, Janet.

Where ON EARTH did you located that first picture, Janet?! I can quite imagine the grin on your face when you first spied it and decided to head your blog with it.

I’m dreaming of the ocean, the beach, the sun, and daffodils, while I see white snow on the ground outside my window.

Mostly I’m hoping my kids and I get over our colds and ski conditions improve so we can hit the slopes again.

I’m also taking the time we’re spending home to plan the summer, which will include RWA this year. 🙂

Janet that picture is hysterical. I confess that when I saw it I thought you were going to be talking about Regency aphrodisiacs!

Elena, yay on the Conference. With Cara coming, too, will this be the first conference your readers will get to meet all the Riskies?? We need to do breakfast or meet for a drink or something.

My husband is the one who pores over the seed catalogs and wonders what vegetables and herbs will grow well in pots on our deck. As for me, I’m just glad it’s no longer dark when I leave the office to catch my bus at 4:30 every afternoon!

As for spring dreams…well, it’s now less than two weeks until pitchers and catchers report for spring training! Ah, spring, the time of hoping against all rationality that this will be the Mariners’ year of miracles…

Keira, I think I did a google search on rude+vegetables.
Elena, feel better soon.
Diane, I can send you the Adams’ whole veg list if you’d like it. I was surprised at the variety but I wonder how many were grown under hot/cold frames.

We need to do breakfast or meet for a drink or something.