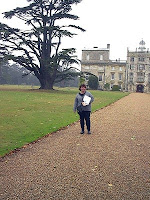 Having Deb Marlowe (shown here at Wilton House) with us yesterday reminded me of our 2003 Regency Tour of England and made me think again about friends. I’ve said over and over that the real gift Romance Writing has given me is the gift of friendship from so many people all over the world, including the ladies who came with us on the trip..and everyone in our Risky Regencies community.

The gift keeps on giving. 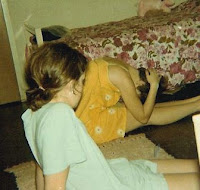 When my children were small and I was finishing up my Masters in Social Work, I gave up sending Christmas cards and, as a result, I lost touch with my very dear college friends from Ohio University. In the last year or so, however, my college friends Eileen and Linda (here in our college dorm room) found me again because of the Romance Writing, because I’m on the web and was mentioned in our Alumni magazine. I even discovered that my friend Linda’s daughter lives not even five miles from me-close enough that I was able to have lunch with Linda, now living in Texas, when she visited her daughter. 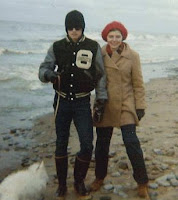 This past week, however, takes the cake. I had a phone call from my old college boyfriend, Nigel (Yes, that’s Nigel and me, back in the distant past). I haven’t heard from Nigel in a brazillion years. He phoned me from a distant overseas location, where he is doing the sort of important work he’d always wanted to do. Nigel had been in England a couple of years ago and had seen one of my books, and later another one when he’d been in the States. (Nigel, as you can guess by his name, was born in England, but grew up in the US)

I love it that my Romance writing has put me back in touch with old friends.

My Regency heroes often have a close male friend, a friend for whom he will do anything. Brummell had Alvanley. Wellington was a good friend to Castlereagh. Earlier there is the strange friendship between Georgiana, Duchess of Devonshire, and Elizabeth Foster, who became the Duke’s mistress. Elizabeth’s and Georgiana’s children by the Duke all grew up together. And the friendship, as fellow writers, of Mary Robinson (The Prince Regent’s ‘Perdita’) and Mary Wollstonecraft.

I wonder if the Patronesses of Almack’s were friends….

Do you have any Romance Writing friendship stories to tell?

Can you think of any other Regency era friendships that I’ve forgotten?

You writers among us, come join the discussion of CHARACTER all this month on the Wet Noodle Posse Blog . There are prizes.

Speaking of prizes, come visit my website and enter my contest. My friend Kathryn Caskie, whose How To Propose To A Prince is due out Feb 26, and I are each giving away signed copies of the books that started our series. From Kathy, it will be How to Seduce A Duke, and from me, The Mysterious Miss M.

And that is the end of the commercials and my blog!

Where do I start? My best friend and I became acquainted on a discussion board for Lord of the Rings, but our friendship solidified when she wrote a short fanfic that she shared with me. And where that story and our friendship has gone!! When I had to put my horse down, we arranged for me to call her the next morning so I’d have something to do. It was our first phone call. Now we talk almost every day, though we live about 2000 miles apart. When I had to put my dog down, she was the first person I called. When I became interested in reading romances (after a 20-year break), one of the first books she gave me was Mysterious Miss M and she suggested I email the author and tell her how much I loved it. Back in 2001, before all this started, I never would have imagined where my life was headed. I like good surprises. 🙂

I’ve met so many wonderful people through my local chapter and through on-line chapters and attending nationals that I don’t know where to start! Nor would I have imagined that I would now be in my 4th and last year as president of our chapter either!

Nice topic, Diane! I think one reason that romance writing leads to such strong friendships is that, as neurotic writers, we naturally feel deep bonds with those people who understand and share our neuroses! 🙂

Writer friends understand that your giant picture of Russell Crowe from Gladiator pasted next to your computer means neither that you’re annoyed at your husband nor that you adore Russell Crowe — but simply that that’s what your current hero looks like.

They understand why a single comma change by your copy editor can lead you to whine for half an hour.

And they forgive you for eating all their Chex Mix. (Sorry, Regina!) 🙂

Hearing from your old boyfriend–how cool! The only thing better is hearing that your old boyfriend wants to get back together–when you’ve moved on to someone so much better! Hee hee. That happened to me once–and it was a bittersweet feeling! Ah, it’s all fuel for the process!

Diane, I often think the same thing about romance–it’s gotten me so many friends, from fellow writers to readers to people who’ve become more than just passing acquaintances, people I never would have met without the common thread of romance.

I just heard from an old friend from when I lived in New Hampshire, she lives in Vermont after traveling all around the world. Not through romance, though, although it was just as great to hear from her.

Judy T, I know who you mean and I too treasure Mary’s friendship, whom I met through the Romance writing.

Elizabeth, the last time I attended RWA, I couldn’t cross an open area without seeing someone I knew. I loved that!

Cara, Deb, and Megan, it is wonderful to have the shared obsession, to have people understand.

It is also lovely to have readers who “get” what we are trying to do, who appreciate the story we wanted to tell.

A number of my best friends are people I’ve met through writing. The cool thing is that they’ve now become friends with a lot of my nonwriter friends who I’ve through school or nonprofit board work. But writer friends, as Cara points out, definitely understand things that no one else does :-).

I also love it when characters in books have friends (I think it adds a lot of depth and often shows a different side of the hero/heroine). I blogged about literary friendships on my website last week.

As for the Patronesses or Almack’s, judging by her letters Emily Cowper was friends with Dorothea de Lieven , Sally Jersey, and Thérèse Esterhazy, though that doesn’t stop her from making some sharp comments about them.

Thanks for the opportunity to say how grateful I am for Risky friends. Even if I don’t post, I check in daily. It helps me stay motivated and sane. Here’s to meeting more folks in San Francisco this summer.

I have to say that the friends I’ve mad through writing are the one thing that keeps me going when the business is driving me crazy, and I think about quitting. I know I could never lose THAT! When I was younger, I often felt “weird,” out of place. But now I have a place where people understand that those pictures of Orlando on my desk have a Purpose, that all those new books are an essential business expense, and yes I do need to dissect every Austen adaptation ever made. 🙂

And I enjoy reading about friendships and family relationships in books, too. They so often add a real depth and dimension to the plot, and allow us to see the h/h through other’s eyes. I especially enjoy sisters, since I never had one of my own!

You certainly are, Amanda. 🙂

Here’s to meeting more folks in San Francisco this summer.

Hurrah! I second the motion, Jane.

Great blog, O Divine One! I cannot begin to tell you how much the writing friendships I have made have changed my life. I met many of my now dearest friends through the Avon FanLit Event. They are the ones who encouraged me to pursue writing my own historical romance novel. Even better they have been there encouraging, supporting and kicking me in the behind when I needed it. I could not get through the day without the ladies at Romance Bandits, Risky Regencies, History Hoydens, the Wet Noodle Posse and the Goddess Blogs. This is my version of CHEERS. Everybody knows my name and I always have a good time and come away even more determined to finish this novel and the next and the next and the next. And it isn’t always about the writing. Hearing about everyone’s life and troubles makes it seem like one big sisterhood – pajama parties and all!

A big sisterhood! You’ve nailed it, O Doggy One! You are exactly right. It feels like a world of sisters. I love it.

I’m shocked that no one has said a word about the-old-boyfriend (well, Deb did) Oh to be as thin as I was back then! I must say, I did not experience a broken heart; our parting was mutual and we can thereby be friends. I am glad to know even my old friends are out there!

He looks like a real cutie, but then I would expect no less of the Divine Ms. G!! Lets not talk about those lean teenaged years. SIGH!

Perfect topic, Diane! Thanks to the Riskies, I’m now close friends with Diane and Ammanda. Last July, I was starry-eyed the entire conference (RWA Nationa), because I spent every minute of it with women who enjoyed their work, were successful at it, and eager to welcome newbies to the field. I met my online friends from the romance community; meeting them in real life was so-so-so much better. I was like a pot with water boiling over…couldn’t contain my joy.

That phone call from Nigel whom you met again through your books. WOW!!

Hmm! I’m not quite qualified to be part of the Romance Writing sisterhood, on a couple of counts. But I like to think of myself as a sort of step-brother, or second-cousin-once-removed, or something like that. 🙂

And, Cara, I do understand the pictures of Russell Crowe! (Or, more precisely, of Maximus, his character in Gladiator.) Really, I do! I only regret that my job doesn’t give me an excuse to tape pictures of hotties on my computer… 🙂

I don’t know what I’d do without my writing buddies, especially my long-suffering critique partners and the Riskies and friends!

However the idea of an extended sisterhood with all romance writers bothers me. Within RWA I’ve sometimes seen the concept twisted to enable unprofessional behavior from individual members. I no longer feel an automatic bond with anyone who is or professes to be a romance writer.

However the fact that some members misbehave just means the real writing sisters (and step-brothers and cousins) are even more important! I am deeply grateful for all of you.