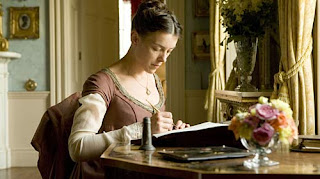 Welcome to another installment of the Jane Austen Movie Club, exclusively here at Risky Regencies! Here we meet to dissect, discuss, and generally over-analyze adaptations of Jane Austen’s work…and more.

Today we have a first: that is, our first selection which isn’t actually an Austen adaptation…but a story about Austen herself. 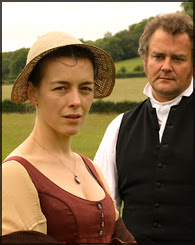 Yes, today we’re discussing the 2008 BBC/WGBH television production MISS AUSTEN REGRETS, a fictionalized semi-biographical story about Jane Austen, and whether she ever regretted not marrying Mr. This or Mr. That.

The relevant credits, with “you also saw her in such-and-such” notes (in green), are: 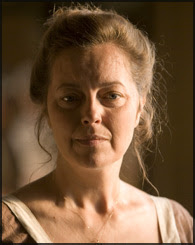 Hugh Bonneville played the Prince Regent in the recent Purefoy version of Brummell, and Mr. Rushworth in the 1999 movie of Mansfield Park.

Law is the third member of this cast to also appear in the 1996 Emma: she played Mrs. Bates. She also happens to be the mother of Emma Thompson, who scripted and starred in the 1995 Sense and Sensibility. 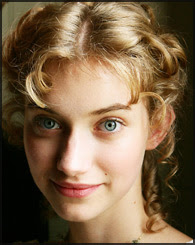 Pip Torrens played the Netherfield butler in the 2005 movie of Pride and Prejudice. (And Bingo Little in the Fry & Laurie Jeeves and Wooster.) 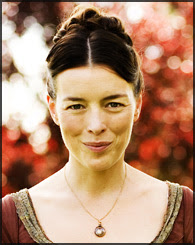 Cara
Cara King, whose cat would have appeared in the 1996 Emma except that he was busy conquering the world that day